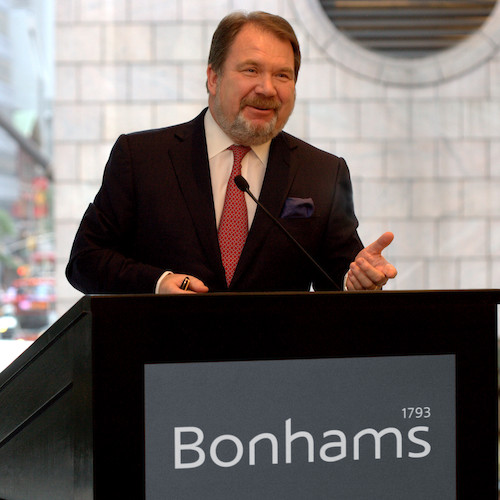 Malcolm Barber is Co-Chairman of Bonhams Group. In a career spanning over 40 years, he has worked in all aspects of the auction business, and has conducted some of the most important auctions of fine art and classic motor cars - his expertise is unparalleled.

Barber's career began when he joined Sotheby's in 1970. He joined the Car department there in 1975 and, in 1980, was appointed Department Director. In 1986, he became the first auctioneer to organize a car sale in Monaco, and two years later, he assumed the roles of Head of the International Car Department and Managing Director of Operations at Sotheby's saleroom in Amsterdam.

Barber is renowned for his professional capabilities, both on the rostrum and in the boardroom, and has handled auctions across the globe, selling many collections with record-breaking success.

Barber is a Freeman of the City of London, a member of the Worshipful Company of Carmen, the Automobile Club of Monaco, the Veteran Car Club of Great Britain, the Vintage Sportscar Club and the Goodwood Aeroclub. He is a licensed auctioneer and member of the NAA in the USA, and has a collection of veteran, vintage and classic cars which he enjoys regularly.