WORLD WAR I: THE ARCHIVE OF A LOST BATTALION SURVIVOR AND POW. .
Leak, 2nd Lt. James Vestal. Platoon Leader of Company E, 2nd Battalion, 308th Infantry Regiment. 77th Division.
An archive of relics belonging to James Leak including accounts of the Battle of Argonne Forest, and his subsequent capture. Leak was in action in the Argonne Forest September 26th to October 4th (when captured).

Conflicts of the 20th Century

WORLD WAR I: THE ARCHIVE OF A LOST BATTALION SURVIVOR AND POW. .
Leak, 2nd Lt. James Vestal. Platoon Leader of Company E, 2nd Battalion, 308th Infantry Regiment. 77th Division. An archive of relics belonging to James Leak including accounts of the Battle of Argonne Forest, and his subsequent capture. Leak was in action in the Argonne Forest September 26th to October 4th (when captured).
A fine grouping of relics from the US Offensive on the Argonne Forest. Comprising;
1. Leak's Brass shoulder insignia of crossed rifles with the number 308 above.
2.Leak's American Expeditionary Forces Identity card, signed by Leak with his military photograph.
3. Leak's officers record book with personal family details, list of courses taken, details of his sharpnel wound on his left knee, and a 1p written account of his action in Argonne forest and capture written by a fellow officer, 1st Lt. Fitch of Company G, 308th Infantry.
4. Leak's small leather bound notelet pad with a voucher for the American officers Hotel in Le Mans, and a 20pp notepad, written in neat pencil with lists of officers and men , names and addresses, and including a 2pp account of his capture and transfer to a German POW camp.
5. Leak's 1st Lt's shoulder insignia and a hand-made brass wired motif of the Statue of liberty, both presumably taken from his uniform.
6. A 2pp hand written report by Leak, 8v0, dated A.P.O. Dec 19 1918 To C.O. 2nd Bn 308 Inf. describing the circumstances that led to his capture by the Germans.
7.A 2pp typed Resolution, signed by the Committee of the Bar of Gregg County [Texas], drawn up on Leaks death on May 4th 1942, for presentation to his widow, in commemoration his life.
8. Two postcards sent home by Leak, one from Texas and a second from France.
9. A vaccination document, listing various vaccinations received in 1917, with one hand written, and one typed certification declaring that Leak had received various vaccinations,
10. A military sketch map of the area around Lake Constance, in Southern Germany where Leak had been interned after his capture; together with an earlier proforma discharge paper.

A poignant collection of relics from a member of the Lost Battalion. The incident of the Lost Battalion is engrained in the pysche of American military tradition. The Lost Battalion was the name given to the nine companies of the 77th Division, some 694 men, who on October 2nd 1918 attacked the German trenches in the Argonne Forest, and found themselves isolated and surrounded by German forces. For the next 6 days, without proper food and water, the Lost Battalion held out under consistent German shelling, and mortar fire, and even some from their own lines. After 6 days of holding out, reinforcements broke through, and just 194 men walked out, with 197 men killed in action, and the rest injured, captured or missing.
Leak who was a platoon commander of Company E, and on October 4th, believing he had an order passed down the line, moved his platoon to the right and got detached from the main force. During a bombardment he took some shrapnel in his left leg, and was captured by a German patrol on October 4th; as he lay pretending to be dead, he got spiked by a bayonet. A lecture by Leak to the Abilene Christian College, Texas on November 11 1938, describes his view of the battle, but omits to say that he was captured. See WWW.worldwar1.com 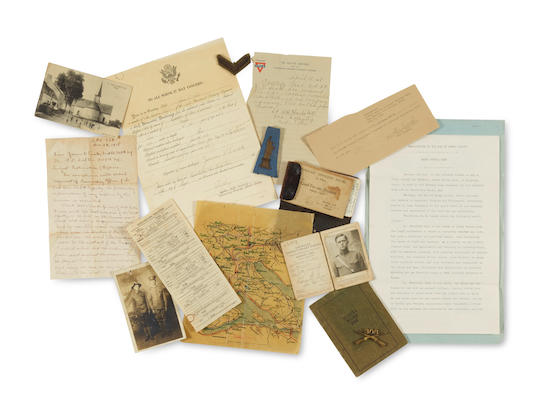