A new force of culture, Renaissance Humanism sought to create a literate and civic-minded class of citizenry through education. It was a fundamental tenet of the humanist viewpoint that eloquence and secular virtue were best learned from the ancient Greeks, and this manuscript is an outgrowth of that core belief. All the texts in this volume are the work of Leonardo Bruni, the leading humanist of the early 15th century, and referred to widely as "the first modern historian." These collected texts represent the greatest examples of ancient Greek oratory and moral philosophy, epitomizing the principles and thought fueling the Renaissance.

This volume begins with two of Bruni's earliest Platonic Dialogues, Phaedo (1405) and Gorgias (1409). Of all the ancient authors worthy of consideration, the Renaissance deemed Plato the one author and study most "befitting a human being," Plato representing for the Renaissance "one of the highest views imaginable of the power and destiny of the human soul"(Hankins I, p 7). These two dialogues are both renowned for their rhetorical and moral excellence: the Phaedo famously teaches the immortality of the soul through the impeccable character of Socrates in the face of death; the Gorgias examines both virtue and rhetoric, with an especial eye to teaching the rewards of virtue in the afterlife. Bruni had an especially high regard for the Phaedo, referring to it as a work of "the utmost urbanity, the highest method of disputation, and the deepest subtlety" (Hankins I, p 50).

Plato's works were essentially lost during the Middle Ages, and their rediscovery at the beginning of the Renaissance sparked a transformation in thought that continues unfolding today. Offering a fresh and transcendent view of human existence, the Platonic philosophy opened up new ways of thinking to the Renaissance – transforming all the arts and sciences. Unlike Aristotle, Plato positively emphasized the importance of mathematics to philosophy, and his thought was eagerly embraced by the new breed of Renaissance scientists. Indeed, the Renaissance study of Plato laid the foundation for our modern understanding of number and science.

Renaissance manuscripts of this caliber are exceedingly rare in the marketplace, particularly those containing works of Plato. Only a handful of Plato manuscripts have appeared at auction over the past 50 years, with only one instance of the Phaedo having been recorded, and none of the Gorgias. We do not find any comparable Bruni manuscript having appeared at auction during this time. Formerly in the library of the Bibliotheca Philosophica Hermetica, a collection devoted to the study of Platonic and Hermetic influences on the Renaissance, the manuscript has a distinguished modern provenance.

This manuscript is a most beautiful testimony to the power of ideas. The high-minded purpose explicit in the Renaissance ideal of Studia Humanitatis reverberates today in our democratic notions of civic responsibility, and Plato's legacy continues to feed the essential genius transforming our world. The commonplace notion that "all philosophy derives from Plato" is still true today; after 2500 years, Plato still vigorously retains his power to nourish and astound. A "science of the eternal," the Platonic philosophy is truly inexhaustible in its potential: vital to the Renaissance origins of the modern world, the Platonic philosophy still points the way to our human future.
See Hankins, James. Plato in the Italian Renaissance. Leiden: Brill, 1990.

"These studies sustain youth and entertain old age, they enhance prosperity, and offer a refuge and solace in adversity; they delight us when we are at home without hindering us in the wider world, and are with us at night, when we travel and when we visit the countryside."
-Cicero, on the concept of Studia Humanitatis 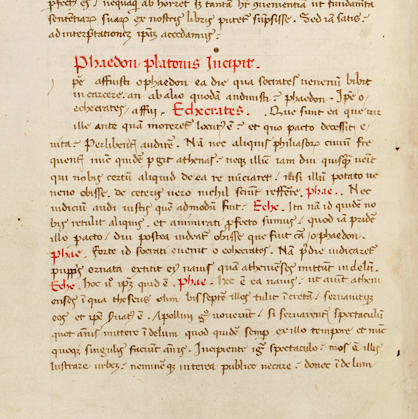