NEWTON'S MOST SUBSTANTIAL STATEMENT ON THE PLAGUE — his autograph notes on the cause, symptoms, and treatment of the Black Death. Working from Jan Baptist Van Helmont's Tumulus Pestis ("The Tomb of the Plague"), Newton here provides his contemporary synopsis of the causes of the plague, its transmission and onset, the visible symptoms of the plague, and its potential cures. Newton's notes are not verbatim transcriptions of Van Helmont's text, but rather a synthesis of his central ideas and observations through Newton's eyes. Newton famously quarantined himself at Woolsthorpe from his studies at Cambridge when the plague ravaged England in 1665 –a time period which proved to be the most productive of his life — his annus mirabilis — returning to Cambridge in mid-1667. Likely written soon after his return, these two pages of manuscript represent the most significant writings on the subject of the plague by the world's greatest scientific mind.

Van Helmont, the most renowned iatrochemical physician of the 17th-century, was tremendously influential on the early chemistry of both Newton and Robert Boyle. A careful observer of empirical nature who stressed the gathering and analysis of experimental data, he invented the word "gas" and is regarded as the founder of "pneumatic chemistry." He was also the first to demonstrate that other gases exist which are distinct in kind from atmospheric air. Van Helmont had direct experience of The Black Death, having been a practicing physician in Antwerp when the plague hit the city in 1605, and his treatise on the plague contains both first-hand observations, and recipes for pharmaceutics actually used in the field, including "sweat potions" and a prophylactic drug made from dried toads. His Ortus Medicinae ("Origin of Medicine") was the largest collection of his writings, and the most influential over the course of the 17th and 18th centuries.

This unpublished manuscript is the most substantial written statement Newton is known to have made about the plague. In analyzing and distilling Van Helmont's first-hand and medical knowledge, Newton records both causes, modes of transmission, and cures, identifies symptoms and their identification, as well as prescriptions for avoiding the plague. He notes the case of a man who having touched "pestilent reeds, immediately felt a pain like a pricking needle, and developed a pestilent ulcer in the forefinger, and died in two days. P. 161, col 1." Some of the observations are clear and simple, "places infected with the Plague are to be avoided...," while others reveal contemporary knowledge that may appear odd to the modern mind, "For Zenexton [amulets] against the plague, Hyacynth (might be the stone jacinth?) is a good antidote; sapphire is better; even amber is good; but the best is a toad suspended by the legs in a chimney for three days, which at last vomited up earth with various insects in it, onto a dish of yellow wax, and shortly after died. Combining powdered toad with the excretions and serum made into lozenges and worn about the affected area, drove away the contagion and drew out the poison."

Van Helmont's writings, along with Boyle's, are thought to have motivated and shaped Newton's study of chemistry, begun soon after his return to Cambridge in 1667, and Van Helmont's work on time ("De Tempore") has been noted as a formative influence on the notion of absolute time in the Principia. References to Van Helmont's work are to be found in a number of Newton's chemical manuscripts, and the only other manuscript of notes on Van Helmont is his "Causae et initia naturalium" (Keynes MS 16, now at King's College, Cambridge). The page numbers in Keynes and in the present manuscript correspond exactly to Newton's 1667 edition of Van Helmont's Ortus Medicinae (see Harrison H751).

Autograph manuscripts of Isaac Newton on medicine are of great rarity in commerce, and no other manuscript on the Plague, an event with a profound effect on Newton, is located. The present unpublished manuscript is of profound importance to Newton's body of work, as well as deeply meaningful within the present context of modern times. Sold in the 1936 Sotheby's Portmouth sale, this remarkable manuscript has been only recently uncovered after missing for more than 70 years. 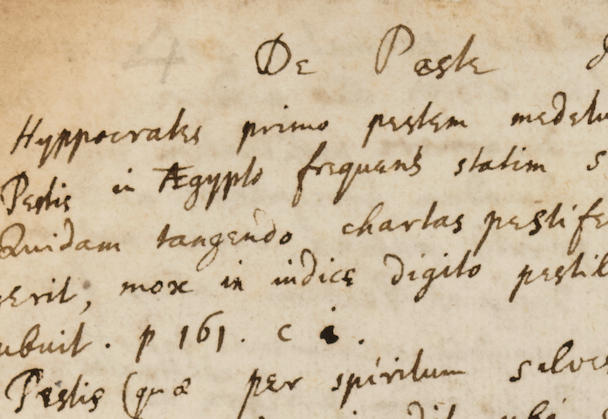 Isaac Newton Unpublished Notes on the Other Great Plague at Bonhams Important Manuscript Sale
"Places infected with the Plague are to be avoided...,"
Read More
View All News