Although Rush had formed as early as 1968 and had even released its eponymous debut album, it wasn't until original drummer John Rutsey left and Neil Peart stepped in that the band's flame was truly ignited. It went from a blues and hard rock band whose first album was considered derivative of Led Zeppelin to a platinum-selling progressive rock powerhouse. Neil Peart not only provided the basis for more complex song structures with his masterful drumming, but by taking over as a lyricist, he freed bassist Geddy Lee and guitarist Alex Lifeson from a duty they had never wanted so that they could focus on bringing the collective musicianship to another level.
Peart reportedly arrived at his July 1974 audition with Rush in a battered car, wearing shorts and transporting his drum kit in trash cans. Lee and Peart hit it off instantly, although it took Lifeson a bit longer to warm to warm to the drummer. Still, they eventually agreed to invite Peart into the band on July 29 of that year, two weeks before the group's first US tour. Peart purchased a silver Slingerland drum kit from local music store Long & McQuade that he used on his first show with the band, opening for Uriah Heep and Manfred Mann's Earth Band at the Civic Arena in Pittsburgh on August 14, 1974. He played this kit on the breakthrough Fly by Night, Caress of Steel, and 2112, considered among the greatest progressive rock albums of all time. Probably the highest profile live appearance of the kit was the 3-night performance at Toronto's Massey hall when the band's first live album All the World's a Stage was recorded. Peart was introduced at those shows as "the Professor on the drum kit" and his extended drum solo on "Working Man," played on the Slingerland kit, is legendary among fans.
All the World's a Stage marked the end of Rush's first chapter and Peart's Slingerland drum kit was soon afterward retired. Rush had gone from Led Zeppelin wannabes to a US Top-40 charting band with a distinctive sound poised to win fans the world over. The Slingerland kit had been on the road for 5 consecutive US and Canadian tours and was seen by thousands of fans from 1974 through 1977. Neil retired the kit at that time and placed it in storage where it sat until it was brought out a decade later as a prize in Modern Drummer's "Neil Peart Drumset Giveaway." 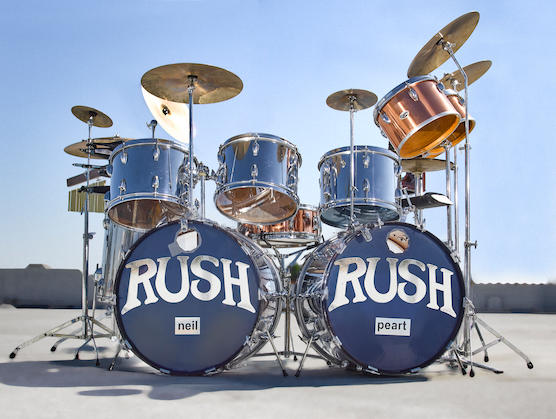