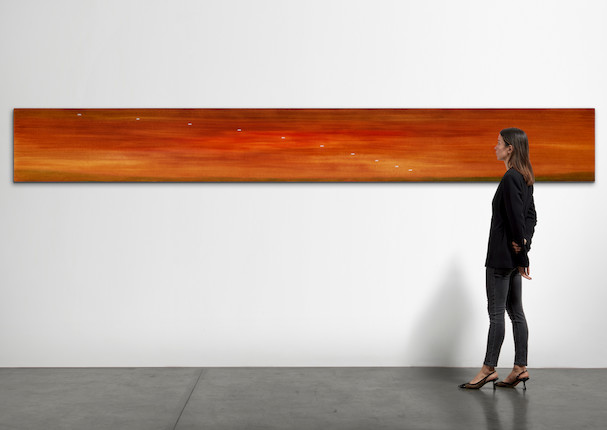 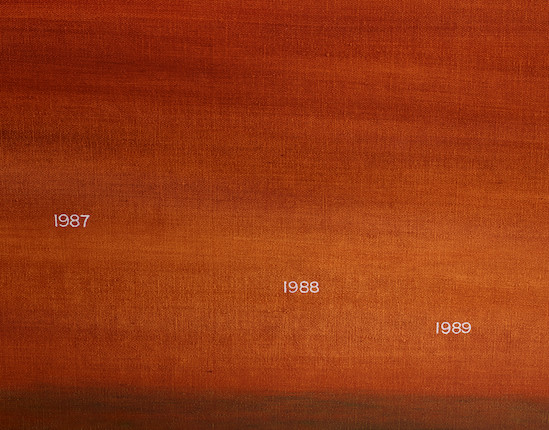 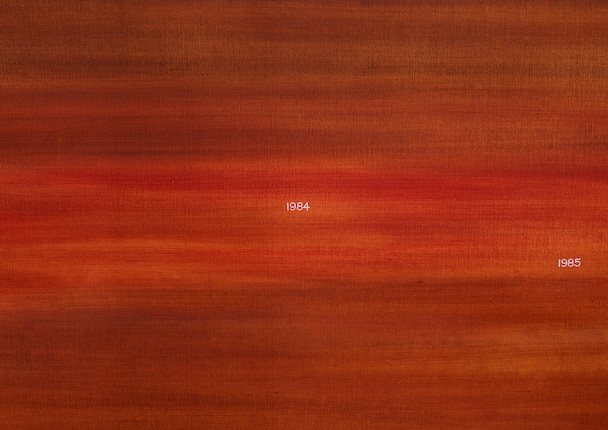 Our Post-War and Contemporary Art specialists can help you find a similar item at an auction or via a private sale.

signed, titled and dated 1980 on the stretcher
oil on canvas

Ed Ruscha is a figure reminiscent of Mark Twain, Norman Rockwell, or Bob Dylan. He is a once-in-a-generation artist who captured the American psyche, channelling the graphic magnetism of advertising boards, magazines and television with his captivating abstract poetry and dazzling imagery. His paintings are definitive of their time, yet they uphold a timeless, American kind of fantasy. Whilst he is often cast alongside Andy Warhol, Roy Lichtenstein, or James Rosenquist as a principal of the Pop Art movement, Ruscha's paintings are psychological thrillers that go well beyond the simple allure of illustrative refinery. In The Eighties, Ruscha delivers a quintessential Los Angeles skyscape, blossoming through a smoggy haze in a feathered dappling of reds, oranges and umbers, through which ten discrete numbers, from 1980 to 1989, arc across the picture as if tracing the setting sun, or a missile over the horizon. It is a painting that is as romantic as it is ominous; and as grand in scale as it is fastidious in its detail. The Eighties administers an impressive image that wonderfully represents the myriad aspects of Ruscha's practice that has made him a titan of contemporary painting, who will further be honoured with a major career retrospective taking place at the Museum of Modern Art in New York in 2023, before travelling to the Los Angeles County Museum of Art.

Ed Ruscha was born in Omaha, Nebraska, in 1937, into a family that he classed as 'real Middle America.' He was raised Catholic, did the paper round, sketched cartoons, notably the comics of Dick Tracy, and collected stamps – a hobby that he would go onto credit for his fascination with miniaturization and the haptic, polished nature of printed materials. In high school, his artistic touchstones were illustrators and cartoonists: Munro Leaf, Basil Wolverton, Robert Crumb. In these graphic artists, one sees the burgeoning sense of humour, precision of execution, and socially savvy commentary that sparked Ruscha's unique style in latter decades. These were the pop artists of their day, feeding daily one-liners into the world of Middle America. It wasn't until 1956 when Ruscha moved to Los Angeles, however, that he would directly engage with contemporary art as it was toward the end of the 1950s. Studying at Chouinard Art Institute – now the renowned California Institute of the Arts, or CalArts – he described the homogeneity of the abstract canvases being produced by his peers, and the stark reversals in his approach to art and life, between his newfound Bohemianism, love of hotrods, and foregoing listening to Elvis Presley: "the biggest thing that I learned in art school, really, was that I had to unlearn everything that I'd learned before [...] I began to realize that I was living a hypocritical life, and was so glad that I had gotten away from the Bible Belt and all those people. Because there was just no room for poetry [...] an artist would starve to death there" (the artist in: Oral history interview with Edward Ruscha, 1980 October 29-1981 October 2, Smithsonian Archives of American Art, Online).

As his ambitions to work in advertising morphed through his interest in Dadaism, his rebuffing of expressionist painting and his Los Angeles milieu, Ruscha's fundamental breakthrough came in 1959 with his painting E. Ruscha; a canvas forty-three inches square spelling his name in vivid red serif script over a parched black support. Language had entered Ruscha's practice, and with typical verve and charisma he announced his own arrival as one of America's most serious talents. The written word became the central medium about which Ruscha hung his paintings. Combining image with text that was often illusive, poetic, abstract, or even utterly banal and colloquial, from his earliest works Ruscha has consistently renewed his working process, pursuing tributaries of thought, various stylistic traits, wordplay, the aural qualities of language and the nature of semiotics and (post-)structuralism. In his employment of words and numbers, unlike the advertising hoardings that he was so inspired by, Ruscha was able to shatter the dichotomy of image and text, allowing an abstraction of meaning to produce a matrix of possibilities. In the present work this is conjured serenely across a fierce sky whose dancing motifs – the years of the 1980s that sequentially fall into the distance – to a contemporary viewer triggers images of a decade of events and memories; but to Ruscha executing the work in 1980, a decade of possibility and futurity.

In The Eighties, Ruscha utilises the canvas as an object, one whose dimensions insist on a narrative, encouraging the viewer to pass across the work's face. At nearly 14 feet long, it is one of the largest works produced by the artist. Speaking of his developing interest in a scalar approach to painting, in 1981 Ruscha commented that it was 'a natural progression of extensions of syntax [...] It's the idea of things running horizontally and trying to take off. It's almost like an airstrip [...] there's some kind of mechanical motion behind it that asks you to walk from one side of the canvas to the other, to read what was on it' (Ibid.). At this key juncture in his career, The Eighties is a work that sees Ruscha using all the tools at his disposal: conjuring the city that was so inspirational to him since his first visit to California in 1949 in the drama of the Hollywood sunset, using words and language as a visual device to create composition and content that in turn opens an exigency for narrative, across a canvas that subtly nods to the shaped canvases of Minimalism. He was an artist achieving some of his most accomplished works and being recognised institutionally during this time, with his mid-career solo exhibition taking place in 1982 at the San Francisco Museum of Modern Art, that would travel to the Whitney Museum of American Art, New York, Vancouver, San Antonio, before finalising at the Los Angeles County Museum of Art.

The 1980s truly represented the premature end of the twentieth century as a modernist epoch. With the proliferation of free market capitalism, political conservatism on the rise and the development of nascent communication technologies, including the early internet and video games, the world underwent dramatic changes. It is a decade that looms ever-larger in the rear-view mirror to our contemporary minds that hear the echo of East-West tensions, pandemics, and economic uncertainty. Presented here, therefore, is a truly exceptional painting by one of the living masters of our time that is potently relevant. Ruscha's The Eighties is a remarkable work that addresses the ambition of a decade, but also the incandescent fading twilight of history. Francis Fukuyama's The End of History and the Last Man argued that with the dissolution of the Soviet Union and the fall of the Berlin wall in 1989, the hegemony of Western liberal democracy driven by Thatcher and Reagan over the course of their premierships had become the universal ideology, pushing mankind beyond the evolutionary sphere and to the end-point of history. Whilst Fukuyama's thesis is practically described by the present work – whose arc of time bends towards its horizon – Ruscha executed The Eighties some twelve years before Fukuyama's magnum opus was published in 1992, testament to the compelling sensitivity Ruscha shows not just to chronological currents, but the placement of his practice within them.

With a major career retrospective in 2023, at 84 years-old Ed Ruscha is only cementing his place further in history as one of the most significant and celebrated painters of the last century. From his roots in middle America, Ruscha truly represents the great American project; an artist so eloquently versed in the aesthetics of his landscape and the voice of his people that he can only render it in the most serene and beautiful terms. In The Eighties, one of Ruscha's iconic Los Angeles sunsets is abstracted to the point of almost becoming a colour field painting, over which his quintessential text hangs. One cannot but appreciate an aching beauty in the fiery yet solemn glow of this radiant, diminishing sky, evoking the palette of Monet's red suns of one-hundred years prior. Championed and collected by global institutions and major private collectors alike, including the Art Institute of Chicago; the Los Angeles County Museum of Art; the Museum of Modern Art, New York; the Stedelijk Museum, Amsterdam; the Tate Gallery, London; the Centre Georges Pompidou, Paris, to name but a few, large scale examples of Ruscha's paintings represent the most desirable and elegant works of contemporary painting, and The Eighties is undoubtedly of this ilk.