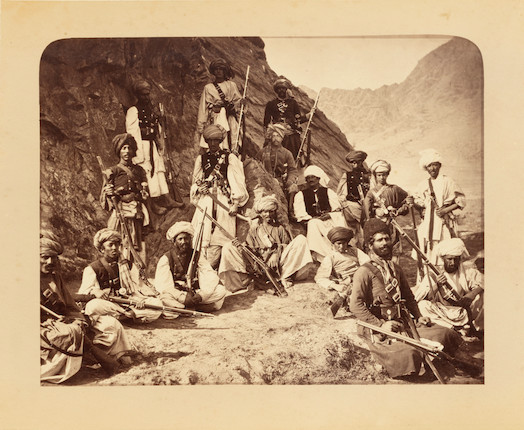 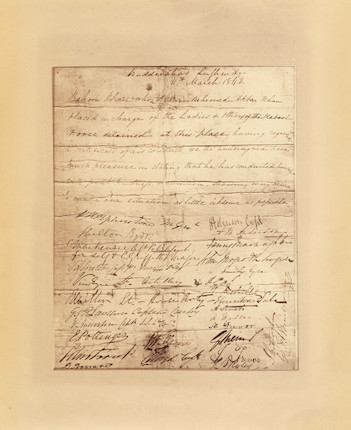 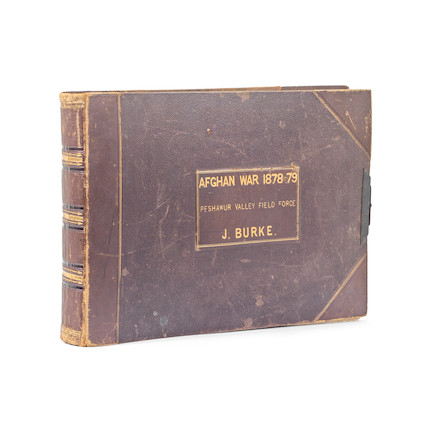 IMPORTANT PHOTOGRAPHIC RECORD OF THE SECOND ANGLO-AFGHAN WAR (1878-9) WITH FINE VIEWS OF THE KHYBER PASS, NORTH-WEST FRONTIER AND NATIVE LEADERS, INCLUDING AMIR SHER ALI. The photographer John Burke (c.1843-1900) had embedded himself, at his own expense, with the Peshawar Valley Field Force, one of three British Anglo-Indian army columns, as they operated along the Khyber Pass and surrounding North-west frontier during the height of the "Great Game" rivalry between Britain and Russia as they grappled for influence over the region and its local chiefs. Sitters in in the portraits include H.H. the Amir Sher Ali Khan (alone, and in a group with Prince Abdullah Jau and Sirdars; his son), the Amir Yakub Khan with Mr. Jenkins, Habeebula Maustif with Major Sir Louis Cavagnari and General Daod Shah. Major Cavagnari and Chief Sirdars with Kunar Syud, Officers of the 51st Regiment, Khyber Chiefs and Khans, and others. Views include Fort Attock, Peshawar, the Khyber Pass, the Buddhist Tope at Ispola, the villages of Jalabad and Bassaule, and others.