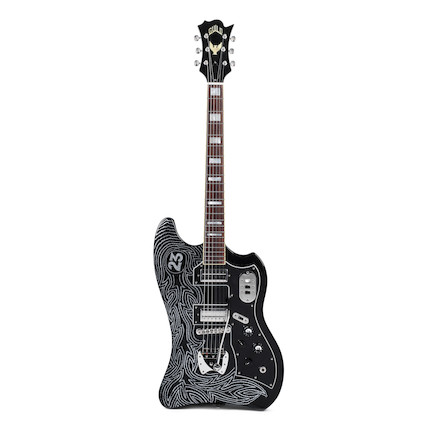 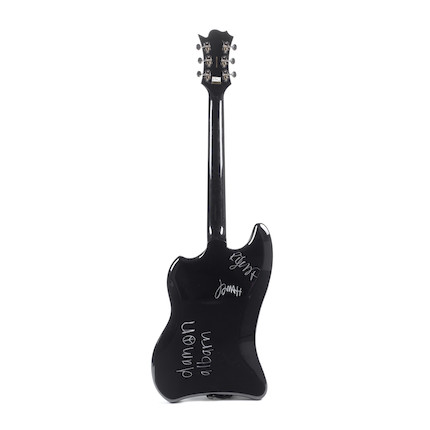 Our Prints & Multiples specialists can help you find a similar item at an auction or via a private sale.

Provenance
The guitar was first used on stage during a free Gorillaz show for NHS workers and their families at the O2 Arena in London on 10th August 2021, the band's first live performance with an audience in over two years. The event also marked the reopening of the London venue following the pandemic. Gorillaz debuted three new collaborative tracks during the show and brought out a slew of guest artists, including Robert Smith, who performed on "Strange Timez" and "Demon Days".

Footage of Robert playing the guitar can be seen at: https://www.youtube.com/watch?v=-LInNWQ6ln8

This guitar has been generously donated by Robert Smith and Gorillaz in support of the charity, EarthPercent. All proceeds from the sale of this lot will go to EarthPercent's grantmaking fund, providing vital support to organisations tackling the climate emergency.

EarthPercent was launched in 2021 by British musician, composer, record producer and visual artist Brian Eno, and aims to provide a simple way for the music industry to support the most impactful organisations addressing the climate emergency. They hope to raise $100 million from the industry collectively by 2030 by encouraging artists and music-related organisations to pledge a small percentage of their income to EarthPercent. This percentage can then be collected at source and diverted to EarthPercent where it will be directed to the most impactful organisations dealing with climate change. For further information on the charity's work, visit EarthPercent.org.

Robert Smith is the founder and frontman of The Cure. Inducted into the Rock'n'Roll Hall of Fame in 2019, the band have released 13 studio albums over the course of the last 44 years. They will be embarking on a 46 date European tour in October 2022 in support of their upcoming 14th album Songs Of A Lost World, concluding with 3 headline shows at London's Wembley Arena in December. Robert Smith collaborated with Gorillaz on the song "Strange Timez".

GORILLAZ - Created by musician Damon Albarn and artist Jamie Hewlett, Gorillaz is singer 2D, bassist Murdoc Niccals, drummer Russel Hobbs and Japanese guitar prodigy Noodle. The BRIT and Grammy-winning virtual band formed following a collision of mishaps, meetings and pure luck to blow up a pre-digital world with their colourful backstory and ground-breaking virtual ways. Based at Kong Studios in West London, Gorillaz settled into a life of musical innovation with an eye-wateringly exciting roster of collaborators, a list that includes musical legends, geniuses and future stars from Elton John to Little Simz, MF Doom to Jean-Michel Jarre, Grace Jones to slowthai, Kali Uchis to Sidiki Diabaté, plus so many more. With seven albums to their name, Gorillaz (2001), Demon Days (2005), Plastic Beach (2010), The Fall (2011), Humanz (2017), The Now Now (2018) and Song Machine: Season One – Strange Timez (2020), Gorillaz is a truly global phenomenon, achieving success in entirely new and unique ways, touring the world from San Diego to Syria, Montevideo to Manchester and winning numerous awards including the coveted Jim Henson Creativity Honor. The band's eighth studio album Cracker Island is set for release on 24th February 2023. www.gorillaz.com