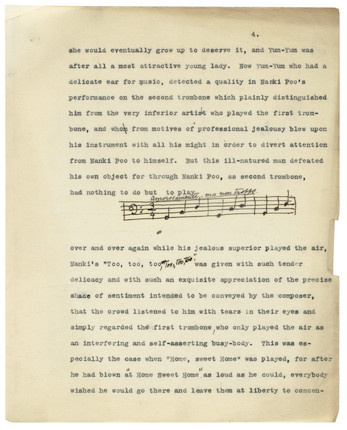 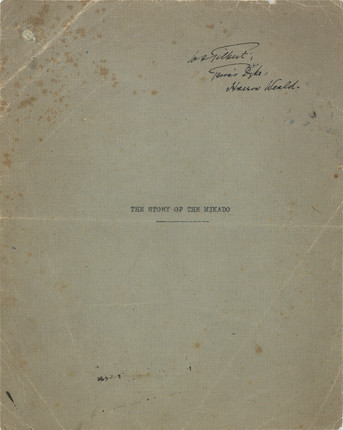 Original typed manuscript for The Story of the Mikado, signed by Gilbert ("WS Gilbert/ Grim's Dyke/ Harrow Weald") to front cover, heavily corrected by Gilbert including corrections to the interpolated songs, and an autograph musical quotation of Nanki Poo's trombone music, 91 pp, 250 x 202 mm, marked "duplicate copy" in type to verso of title-page, with numerous autograph emendations, additions, and deletions, likely used by the printer with appropriate markings to the verso, hole through upper left corner throughout, some soiling.
WITH: Autograph Letter Signed ("WS Gilbert") to the book's illustrator Alice Woodward discussing the manuscript, 3 pp written on all sheets of a bifolium, Grim's Dyke, Harrow Weald stationery, September 13, 1908, creases and tears mended with tape.
WITH: Autograph Note Signed ("WS Gilbert") to Alice Woodward regarding her illustrations, "I have not seen any of your full-page drawings so I cannot judge as to whether your fears are well-founded. But the publishers appear to like them very much," 1 p, the first leaf of a bifolium on Grim's Dyke, Harrow Weald letterhead, second leaf removed, July 16, 1908, torn fold mended with tape, additional autograph transmittal envelope to Woodward corresponding to a different note, postmarked Feb 8, 1908.
WITH: rare first printing of the libretto for The Mikado; or The Town of Titipu. London: Chappell and Co, 1885. 8vo. Original printed wrappers, worn, disbound.

HEAVILY ANNOTATED TYPESCRIPT OF THE STORY OF THE MIKADO, W.S. GILBERT'S FINAL LITERARY WORK. Gilbert & Sullivan's The Mikado was their most successful opera from its opening in 1885, running for a staggering 672 performances at the Savoy Theatre, the second longest run for a piece of musical theatre at the time. In 1908, W.S. Gilbert completed the manuscript for a prose adaptation, titled The Story of the Mikado, and publisher George Bell brought in Alice Woodward for the illustrations. It was intended as a Christmas book in the style of The Pinafore Picture Book: The Story of HMS Pinafore, published in 1908 by Bell with illustrations by Woodward.

The Story of the Mikado was delayed until 1921, according to the foreword by publisher and editor Daniel O'Connor because of the war, "difficulties which have obstructed the production of books, especially those with coloured illustrations, during the last seven years." However, the manuscript was completed by 1908, at least 6 years before the start of the war. The letters to Woodward here hint at some discomfort with the illustrations, but we find no further correspondence or discussion.

Interestingly, from the first letter, this corrected copy of the manuscript appears to have been delivered to Alice Woodward. In 1907, Woodward had illustrated a similar work for Bell called The Peter Pan Picture Book," with Barrie's story retold by Daniel O'Connor. O'Connor would later publish the 1921 first edition of The Story of the Mikado, apparently from this corrected typescript in the possession of Woodward.

A wonderful piece of Gilbertiana, this typed manuscript fills in some blanks in the history of Gilbert's final literary work, with potential for further research into the story of The Story of the Mikado. With large institutional holdings at the Morgan Library and the British Museum, Gilbert's manuscripts are rare in the marketplace, with only this one and an 1879 summary of Pirates of Penzance used for promotion recorded at auction by rarebookhub and ABPC.