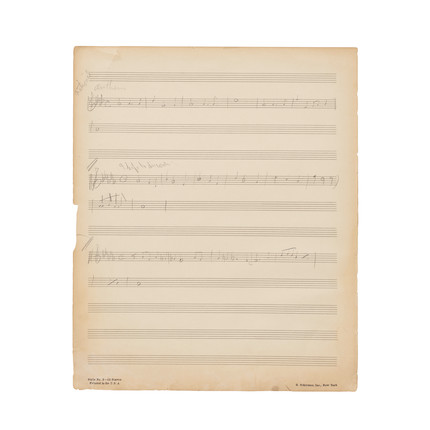 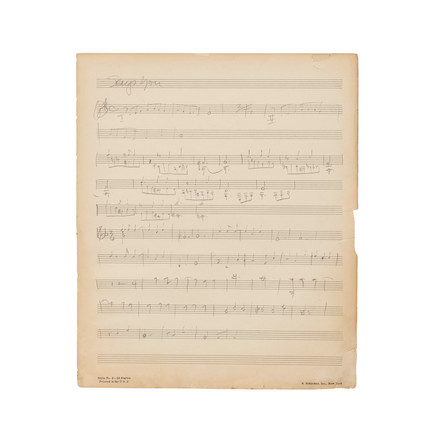 GERSHWIN WORKING MUSICAL MANUSCRIPT PAGE FROM OF THEE I SING.

This leaf features sketches for two separate tunes. The first two staves feature a melody line for an unknown tune that may not have been realized further. The second tune, beginning on stave IV, is in 3/4 time, and is the melody line for "I'm About To Be A Mother" which was used in Of Thee I Sing. It is also known as "Who Could Ask For Anything More (I'm About To Be A Mother)." It was not published as a stand-alone song, but can be found in the published vocal score for Of Thee I Sing, Act Two, Scene Three: "The Senate," starting on page 161. WITH: sheet music for "Fine and Dandy" by Kay Swift and Paul James, signed and inscribed by Swift to Constance; and "De Chain Gang" by J. Rosemond Johnson, signed and inscribed by Johnston to Swift.
Provenance: the three items were purchased together, possibly from the estate of Gerswin's longtime companion Kay Swift.


Of Thee I Sing debuted on Broadway in December of 1931 with a score by George and Ira Gershwin and a book by George Kaufman and Morrie Ryskind. The show satirizes American politics and was the first musical to win the Pulitzer Prize for Drama.

We wish to thank Michael Feinstein for his help in identifying this manuscript.