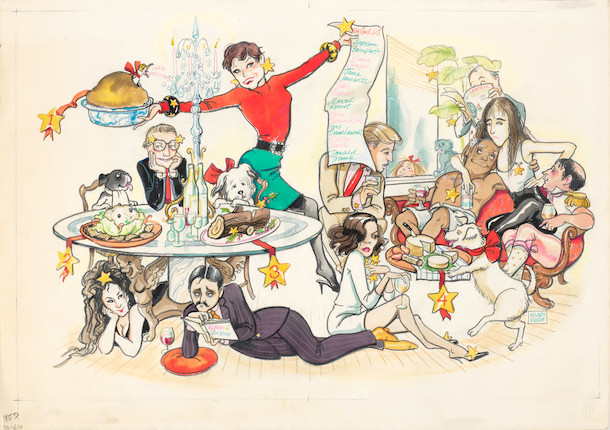 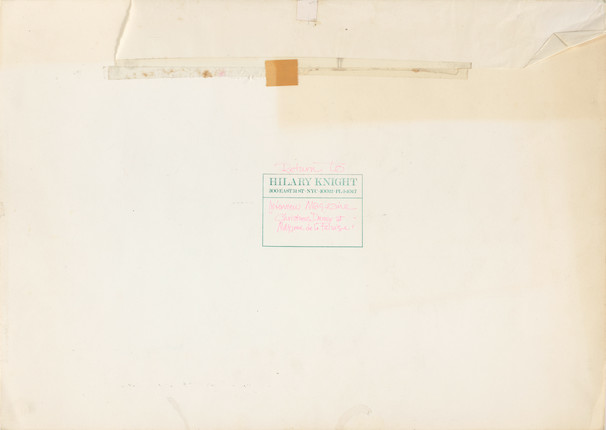 A WONDERFUL AND WITTY WATERCOLOR FOR WARHOL'S INTERVIEW MAGAZINE featuring an interesting assortment of personalities on Maxime de la Falaise's guest list for her fantasy Christmas. Maxime de la Falaise was an English model turned "food maven" and hostess, as well as a Warhol favorite, featuring in a number of his early seventies films. As Patti Smith lounges on Napoleon's lap, her arm draped over Picasso, Tama Janowitz ogles a wine-drinking Marcel Proust, reading her Slaves of New York. Eloise's dog Weenie shares a glance with Yves St. Laurent, and Bianca Jagger seems somewhat taken aback by the dog so close to her Chateau Lafitte, while Donald Trump, who had just completed the purchase of the Plaza Hotel, leans in. John Richardson can be seen in the background reading the most recent catalogue for "It's a leather Christmas." The illustration reminds one of a true New York moment of the eighties, combining personalities from a wide range of arts and culture.