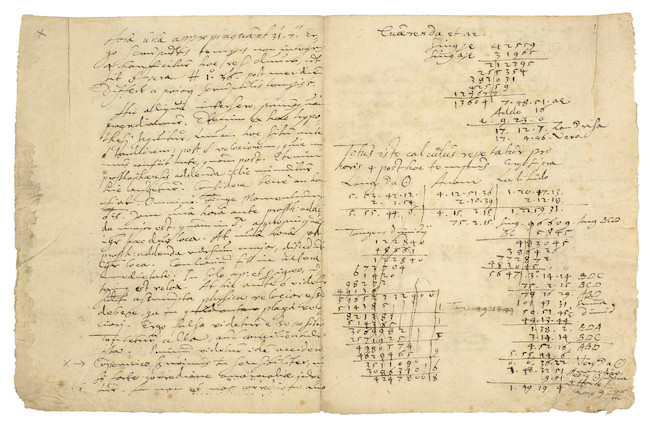 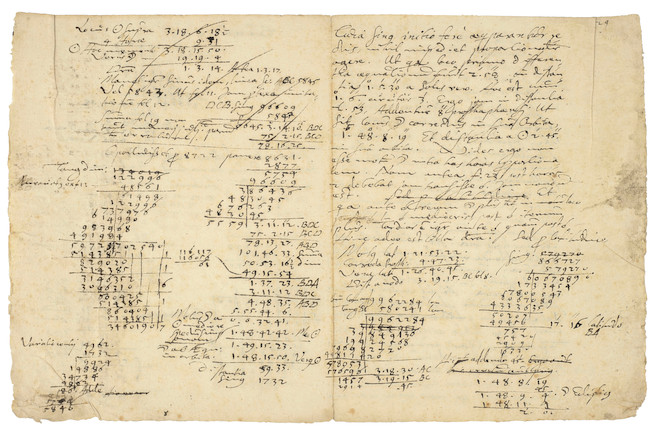 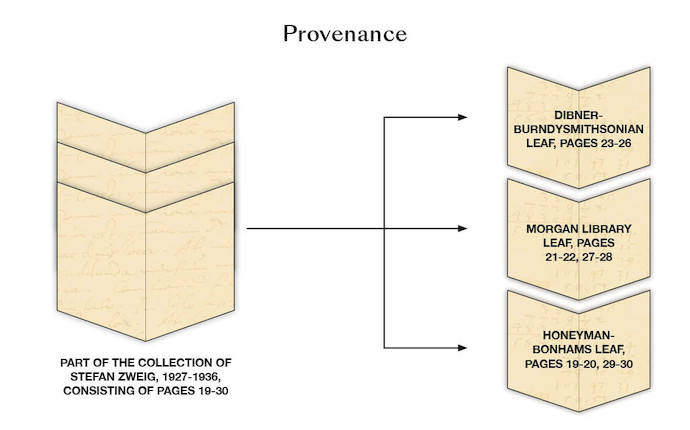 Printed Books and Manuscripts to 1700
Lot 19
KEPLER INVESTIGATES PLANETARY MOTION.
KEPLER, JOHANNES. 1571-1630.
Autograph scientific manuscript, in Latin, containing calculations and notes on the relative velocity of the moon and the sun referring to Tycho Brahe's Tabulae which he helped compile, and noting the work of Copernicus,
Fine Books and Manuscripts
13 December 2022, 11:00 EST
New York

"Copernicus had shown the sun to be the centre of the universe round which the earth and planets revolve, but his description of their movements was still strongly influenced by ancient conceptions of order and harmony. It was Kepler's aim to determine the true movements of the planets and the mathematical and physical laws controlling them" (PMM 112).

A RARE AND IMPORTANT SCIENTIFIC MANUSCRIPT BY JOHANNES KEPLER ON THE RELATIVE ORBITS OF THE SUN AND THE MOON, REFERENCING COPERNICUS AND BRAHE. Likely written during his early years in Prague after Brahe's death, these four pages are Kepler's examination of the variation of a planet's rate of motion at different stages of its orbit, a line of thought that led to his renowned Laws of Planetary Motion. The calculations relate to the longitude of the moon and the sun, and the movement of the moon within its orbit. Here he further notes that Copernicus was the first to work on this problem.

The subject and format of the leaves closely resemble Kepler's early 17th-century writings and calculations relating to the orbit of Mars and the moon. Although the present manuscript does not mention Mars, the investigations occurred concurrently with the lunar/solar investigations evinced here. Using raw data from Tycho Brahe's tables, which he helped compile and completed upon Brahe's death, Kepler can be seen referencing specific pages (e.g. "fol. 19"). (See Casper, Kepler, pp 125-132). Kepler finished up his studies on mars in 1605, and completed a manuscript detailing his findings, but his manuscript was not published until 1609 as his revolutionary Astronomia nova, setting forth his first two laws defining planetary orbits and marking the beginning of modern astronomy.

Kepler's manuscripts are notoriously hard to decipher and transcribe. These notes were not produced for publication, and he tends to follow a thought as it occurs to him, instead of proceeding in order, "Clarity of presentation, and a sense of continuity, are therefore often entirely lacking" (Donahue, "On Editing Keplerian Manuscripts: Essay Review of Johannes Kepler Gesammelte Werke", xx/l, ed. by Volker Bialas, Journal for the History of Astronomy, Vol. 23: 2, 1992, p 141). He also is known to have reused partially written leaves for new purposes, creating challenges in transcription and interpretation.

These four pages originally belonged to a fragment of 12 pages, comprising pages 19-30 of a larger manuscript. Sold in Berlin in 1927 by Henrici, they next appear in the renowned collection of Stefan Zweig (see Katalog und Geschichte der Autographensammlung Stefan Zweig, item 399). In 1936, these four pages appeared in Hinterberger's Katalog IX of Zweig's collection, consigned from his exile in London. Four of the original 12 pages are now at the Morgan Library (Misc Heineman MS 122, pp 21/22 and 27/28), and four are in the Smithsonian collection, via the Dibner/Burnby Library (SIL-DL.MSS782A, pp 23-26). These 4 pages are the only pages of this important scientific manuscript remaining in private hands and represent one of only two Kepler scientific manuscripts recorded at auction in the last 100 years by American Book Prices Current. The other sold in these rooms, October 25, 2022.

"Kepler's marvelous life's work shows us especially beautifully, that cognition cannot blossom from sheer empirics, but from the comparison of what is imagined, with what is observed."
-Albert Einstein