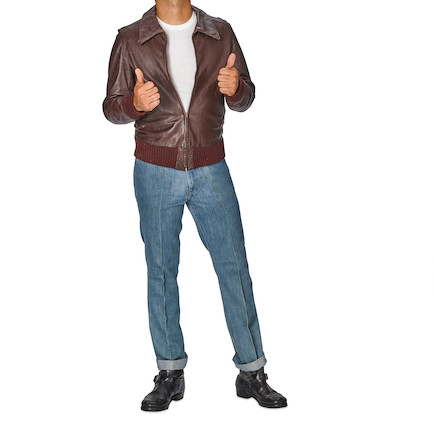 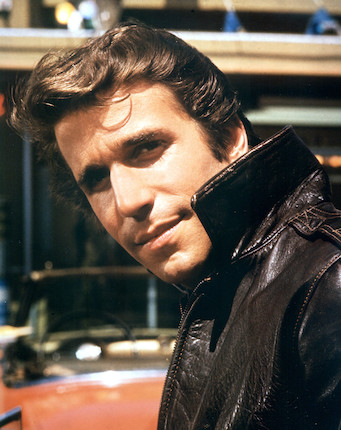 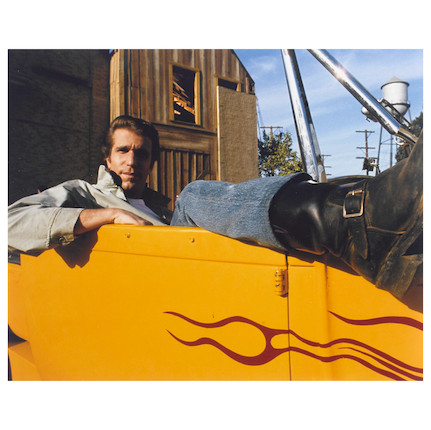 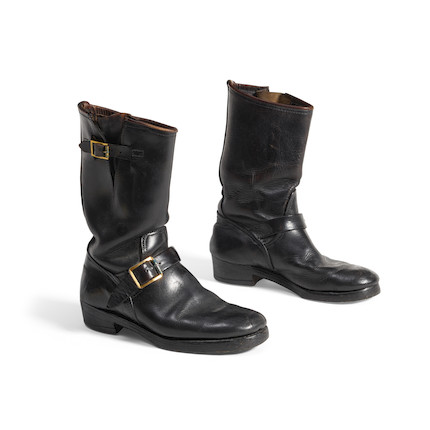 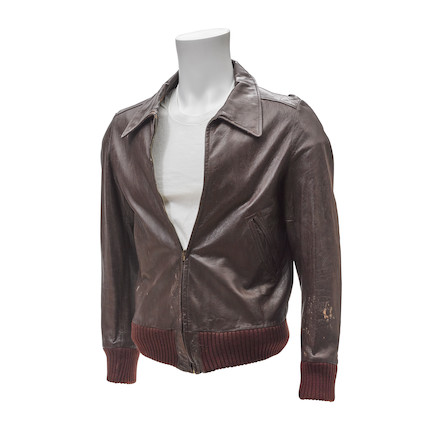 ABC Television, 1974-1984. Comprising a brown leather jacket with elasticated wool cuffs and waist; two white cotton t-shirts; a pair of Levi's denim jeans; and a pair of black leather biker boots, the boots worn throughout the first five years of Happy Days, as well as in The Lords of Flatbush, Columbia Pictures, 1974. With a group of 13 color and black-and-white still photographs; a color photograph of Henry Winkler and Ron Howard as Fonzie and Richie, signed later by Winkler and Howard; and two corresponding Fonzie posters.
Photographs, majority: 10 x 8 in.

Leather jacket, jeans, white t-shirt and biker boots ... an image synonymous with the rebel after Marlon Brando's iconic and oft-copied look for The Wild One in 1953. The leather jacket became a symbol of countercultural rebellious style associated with everyone from Brando, James Dean, and Elvis in the 1950s to the Ramones and the Sex Pistols in the 1970s. Similarly, Brando's biker boots became inextricably linked to the image. The biker look has become one of fashion's coolest commodities, being assimilated into the worlds of music, film, and pop culture in general. No wonder, then, that Happy Days creator Garry Marshall envisaged Arthur "Fonz" Fonzarelli in that look. With his signature look, the Fonz became the epitome of cool. With the huge global success of Happy Days, the Fonz is now just as closely associated with the biker look in the 1970s as Brando was in the 1950s. For kids growing up in the 1970s, their point of reference was not James Dean or Marlon Brando but the Fonz. In fact, his association with the leather jacket is so important that the Smithsonian owns another of the Fonz's jackets in its permanent collection.

In the first series of the show, the Fonz wears penny loafers and a windbreaker; the network deemed the biker look a little too edgy for the wholesome Cunningham family and primetime TV, too closely associated with gangs and criminals. Garry Marshall pushed for the Fonz to at least wear his leather jacket whenever he appeared with his motorcycle, under the guise of it being for safety purposes when riding a motorbike, and the network capitulated. As the Fonz became a regular character in the show and ratings increased, the Fonz gradually became synonymous with his "greaser" look of jeans, t-shirt, and leather jacket. The leather jacket eventually became part of many of the show's plotlines, with the Fonz refusing to be parted with his jacket for the Army physical examination in the episode, The Physical. Likewise, when some teens in leather jackets were caught vandalizing, prompting Officer Kirk to make leather jackets illegal, Fonzie was arrested for refusing to shake off his leather jacket and all his friends turned up in leather jackets out of support.

According to Henry Winkler, at least seven jackets were purchased for the show: one is in the Smithsonian, and one was destroyed after the lining was ripped out and the coat adapted for the famous "jumping the shark" waterskiing scene in Happy Days. Two other examples have appeared at auction before.

"Going through all of the stored cardboard boxes, there were so many surprise discoveries. I had forgotten that I saved the jeans and the t-shirts. The Engineer boots I bought in NYC at a sporting goods store around 23rd Street and used them in The Lords of Flatbush. When Happy Days was picked up as a series I brought them out from New York to wear as The Fonz." - Henry Winkler