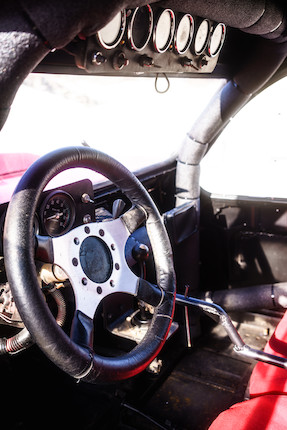 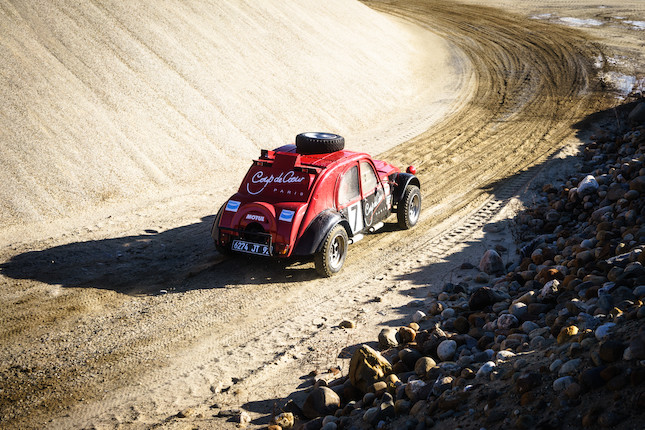 No doubt inspired by Citroën's own twin-engined Sahara 4x4, this 2CV desert racer was built in the 1980s by Frenchman Jack Hanon, who wanted to compete in the Rallye de l'Atlas, a gruelling 1,800-mile race across Morocco's Atlas Mountains. After more than 3,000 hours of work, this unique vehicle emerged from his garage in the Paris suburb of Gennevilliers. The chassis consists of two Citroën Ami frames cut and welded together, while motive power (130bhp) is supplied by two Citroën GSA flat-fours, one at either end, connected together. Both engines retain their transmissions, with a shared gear lever and single clutch pedal. For access to the major components, all the glassfibre body panels fore and aft of the doors can be raised upwards. The car has 12" of ground clearance, coil-sprung shock absorbers all round, and inboard disc brakes front and rear.
Hanon and his 2CV competed in the Rallye de l'Atlas and other races in Morocco for a decade, commencing in 1985. Taking the 2CV with them, Hanon and his wife then immigrated to Canada where he died in the mid-1990s. His widow kept the car for 20 years before selling it to her tenant, who sold it to the vendor in 2014. The new owner then commenced a complete restoration to 1985 specification and restored Coup de Coeur livery. The car has a New Hampshire, USA title and is currently resident in Holland.

Bidders should note that the automated 100-point Seller's Assessment is provided by each Seller at the point of consignment using the guidelines below, and is not provided, assessed or verified by Bonhams MPH. Accordingly Customers (Bidders) are on notice that each vehicle is offered "as is / as seen" subject to the Conditions of Sale for the auction, and Customers (Bidders) are strongly recommended to view the Lot(s) being offered, before bidding, in order to satisfy themselves as to their condition; Bonhams MPH will not entertain disputes over Sellers' Assessments.

Please note as this is a race car, elements such as interior, chrome/plastic fittings are not scored, thus giving the illusion of a lower rating. We have been advised by the vendor that this unique Citroen 2CV is in generally very good mechanical and cosmetic condition, and that the lot also comes with extensive historic documentation.