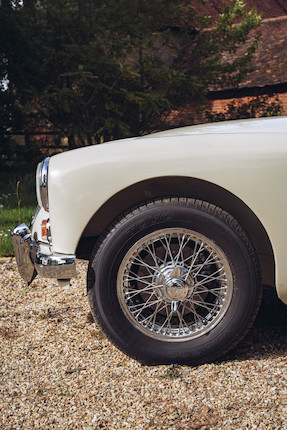 Although the EX182 prototype debuted at Le Mans in 1955, by the time the actual race came around the design of what would be known as the MGA had effectively been finalised, the event itself being little more than a useful opportunity to check that everything was as it should be. Replacing the traditional T-Series MGs, the MGA combined a rigid chassis with the Austin-designed, 1,489cc B-Series engine. Initially the latter produced 68bhp at 5,500rpm, although this was later raised to 72bhp at the same revs to further improve performance. Running gear was based on that of the TF, with independent front suspension and a live rear axle, but as far as its road manners were concerned, the far superior MGA was in an entirely different league. Clad in a stylish aerodynamic body and capable of topping 95mph, the MGA proved an instant hit, selling 13,000 units in its first full year of production.
After the disappointments of the Twin Cam model, engine enlargement was seen as the way forward. The result was a capacity increase from 1,489cc to 1,588cc that raised maximum power to 79.5bhp and boosted torque by 17 percent. Acceleration was improved and the MGA in '1600' form was now a true 100mph-plus car. To cope with the extra performance, disc front brakes were adopted and the suspension up-rated. The more-refined coupé version, with wind-up windows and lockable doors, continued as before while the roadster now came with sliding side windows. Introduced in 1961 and built for little more than a year, the face-lifted 1600 Mark II came with a revised and enlarged (to 1,622cc) B-Series engine and further improved performance courtesy of an extra 13bhp and raised overall gearing
This particular MGA 1600 Mark II Roadster has had only three owners from new: the first for over four decades from 1962 to 2003, the second from 2003 to 2017, and the present since 2017. The vendor has driven the car less than 1,000 miles since acquisition, and describes it as in generally good condition, with excellent engine and transmission. Particularly worthy of note is the five-speed gearbox, which makes for a much-enhanced driving experience and more relaxed cruising at higher speeds. Interested parties should note the original gearbox will be supplied with the car, should anyone wish to convert it back to its original specification. Offered with a V5 registration document.