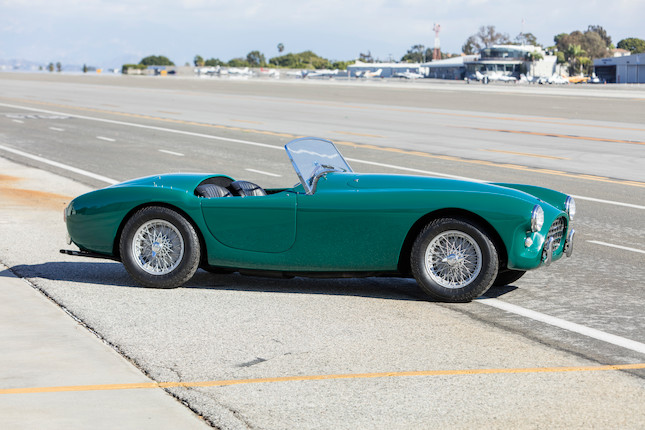 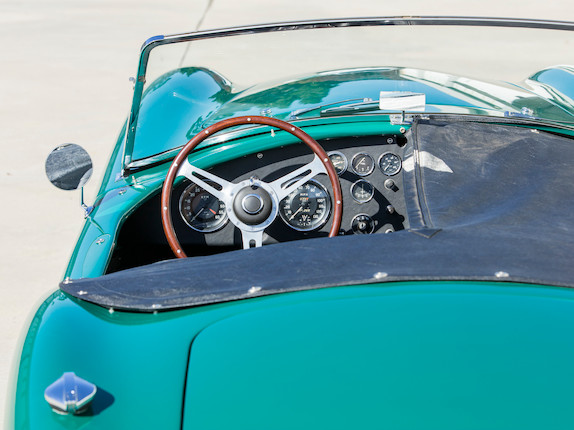 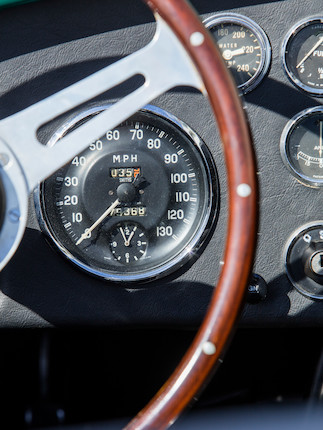 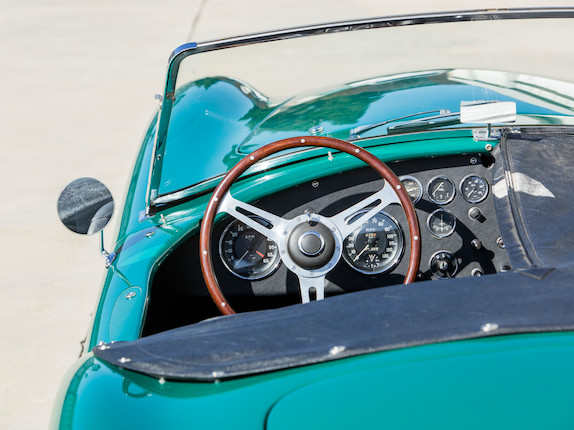 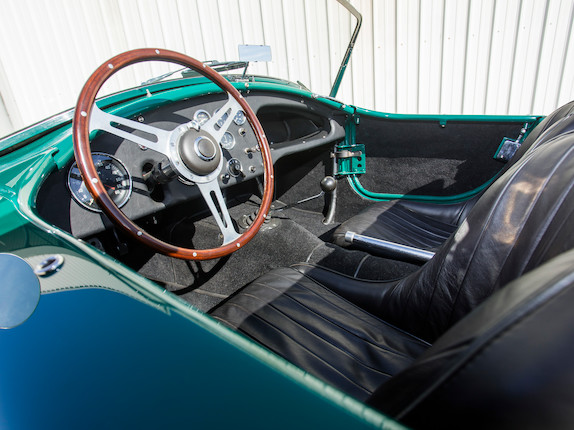 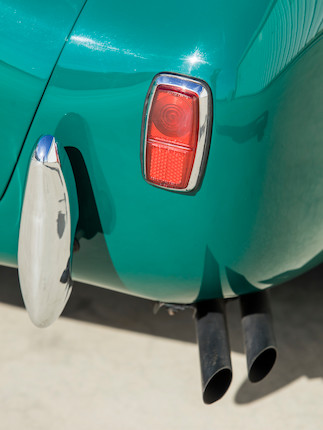 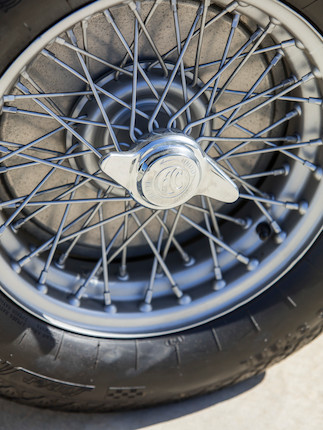 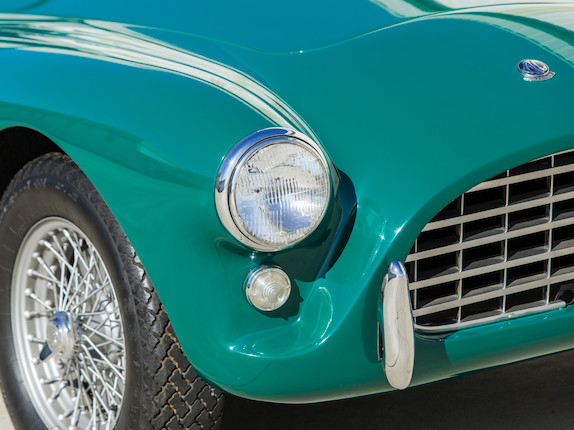 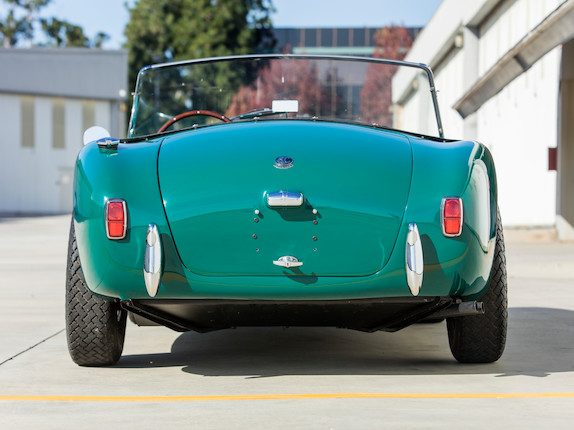 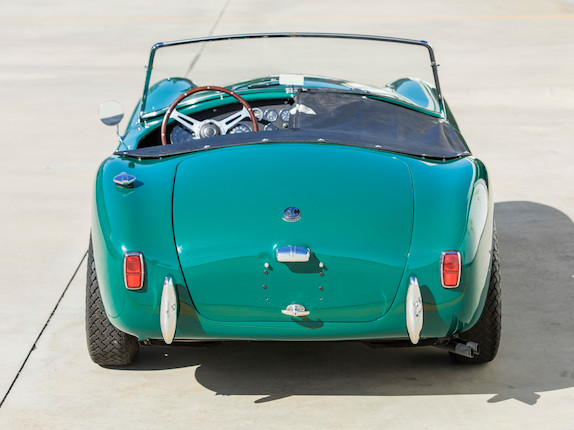 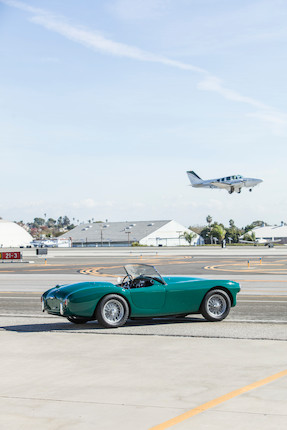 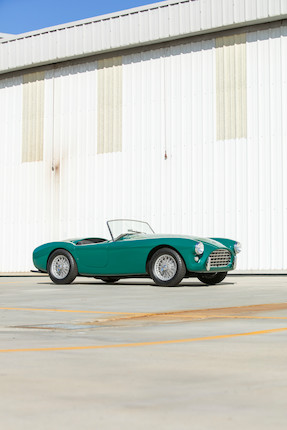 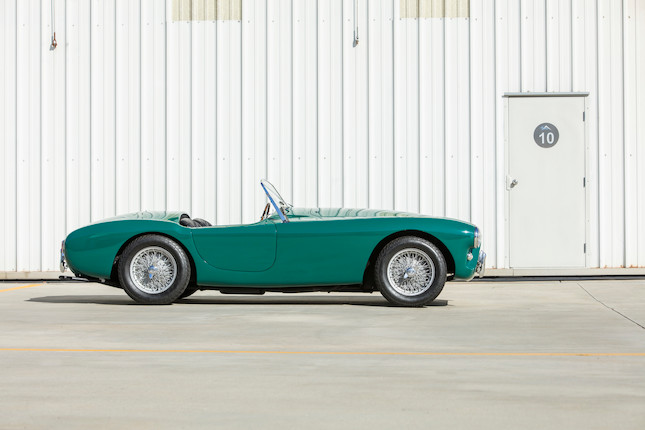 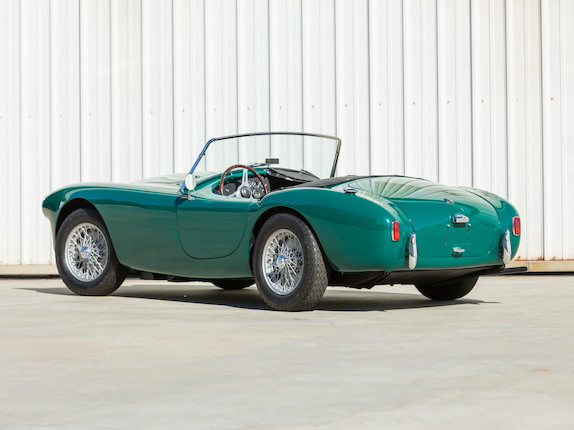 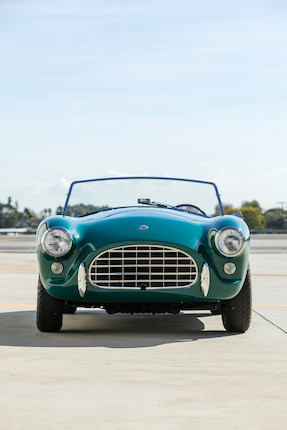 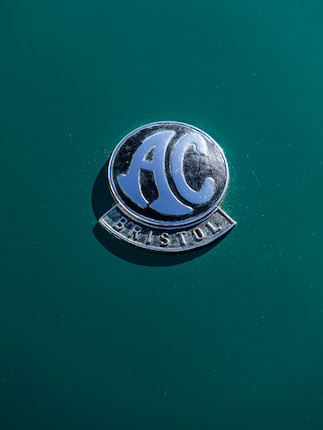 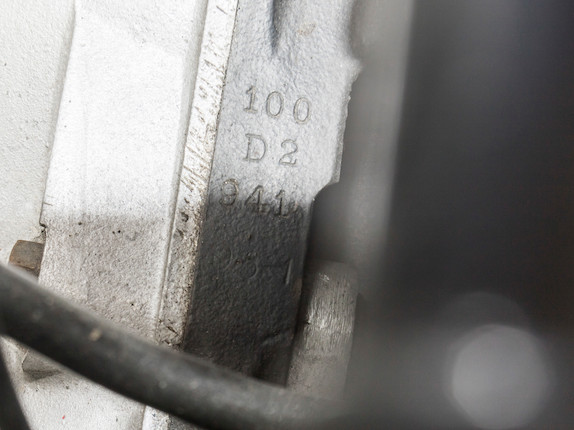 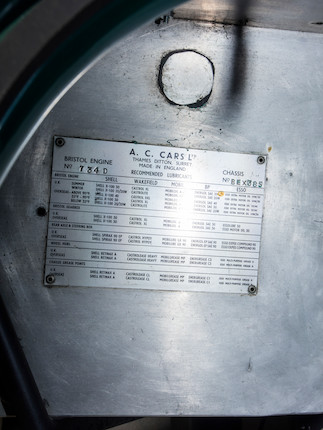 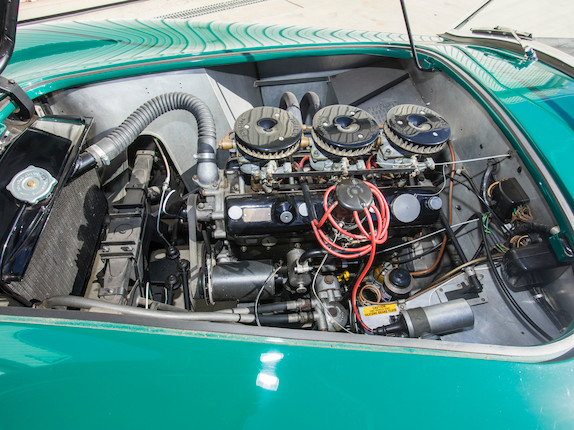 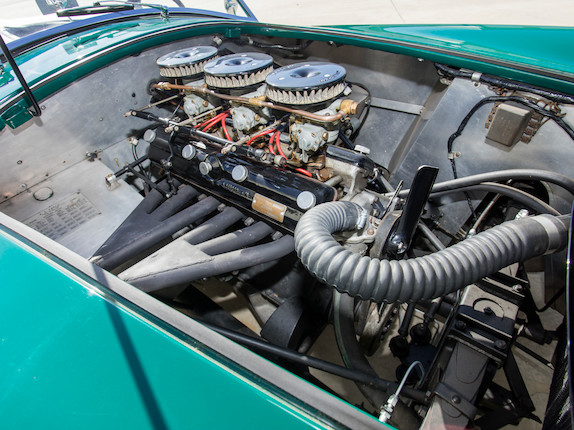 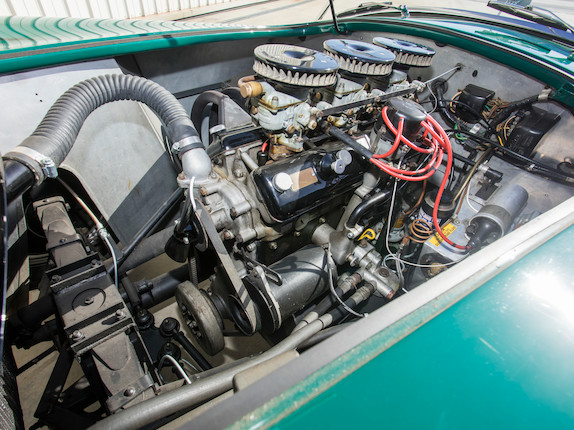 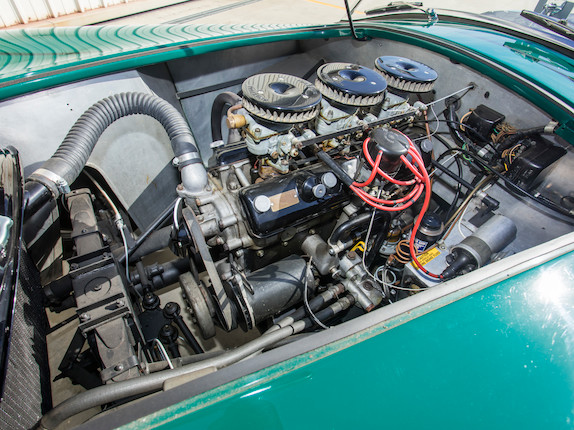 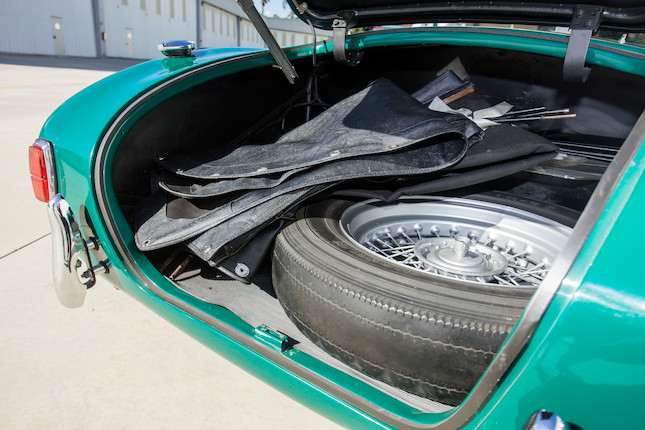 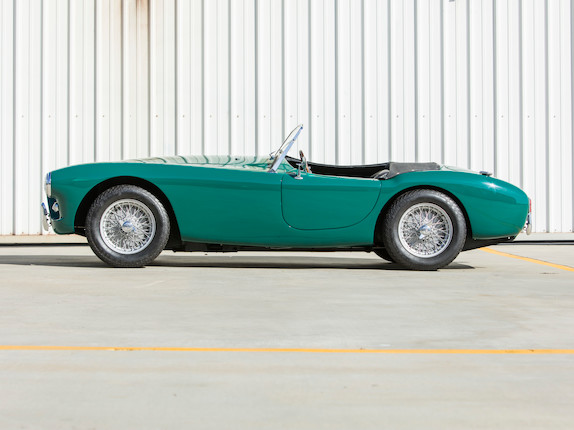 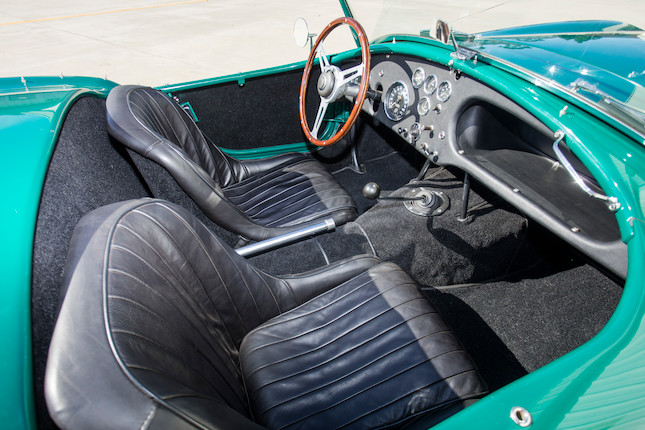 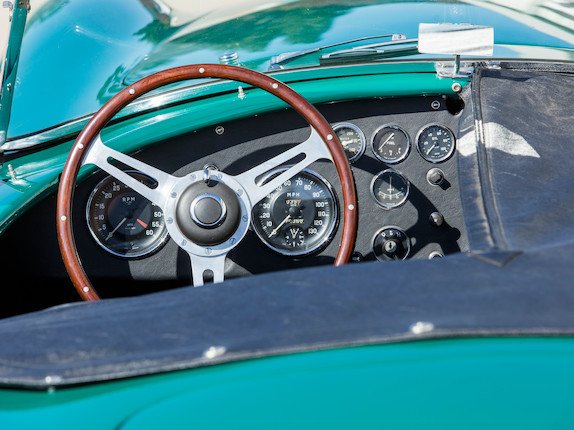 *Fine example of the original and classic Ac Ace Bristol Roadster
*Lovely British Racing Green over Black color scheme
*Complete with tonneau cover, convertible top, side curtains, and jack
*Eligible for some of the most desirable concours and driving events

"Of them all, the Ace was the truest sports car: it could be used for daily commuting or for high-speed long-distance touring, but it could also be driven to a race meeting, campaigned with distinction, and driven home again - even if that race was the Le Mans 24 Hours." - AC Heritage, Simon Taylor & Peter Burn.

The success of Cliff Davis's Tojeiro sports racer prompted AC Cars to put the design into production in 1954 as the Ace. The Davis car's pretty Ferrari 166-inspired barchetta bodywork was retained, as was John Tojeiro's twin-tube ladder frame chassis and Cooper-influenced all-independent suspension, but the power unit was AC's own venerable, 2-liter, long-stroke six. This single-overhead-camshaft engine originated in 1919 and with a modest 80bhp (later 100bhp) on tap, endowed the Ace with respectable, if not outstanding, performance.

In 1955, AC added a hardtop version—the fastback-styled Aceca—and from 1956 onwards both models became available with the more powerful Bristol 2-liter, six-cylinder engine with its ingeniously arranged, pushrod-operated inclined valves. Although taller and heavier than AC's own engine, the BMW-based Bristol was considerably more powerful thanks to its superior cylinder head design and down-draught carburetors. Up to 130bhp was available from the Bristol unit in road trim, in which form the Ace could touch 120mph (195km/h), while around 150bhp could be wrung from it for racing.

The Bristol-engined Ace was not only more powerful, it was also considerably more expensive, costing £2,011 in 1957, an increase of 22% over the price of the AC-engined version. For that you could buy two MGAs, and even Jaguar's XK140 was cheaper than the Ace Bristol. Nevertheless, by the time Ace production ceased in 1963, more than half the 723 cars built had left the factory fitted with Bristol engines.

The combination of a fine-handling chassis and a decent power-to-weight ratio helped the Ace to numerous successes in production sports car racing. Arguably, its finest achievement being a first-in-class and seventh overall finish at Le Mans in 1959. Indeed, its basic soundness and versatility were reflected in the fact that relatively few major changes were found necessary when the Ace was endowed with Ford V8 power to create the legendary Cobra.

This desirable Bristol powered AC Ace left the factory on November 27, 1957 with a Bright Blue Metallic paint, light beige interior, blue top, and tonneau cover. The new Roadster was original equipped with a left-hand drive steering arrangement, just as it appears today. Destined for Precision Autos of Houston, Texas, the original owner is unfortunately not listed within the records on hand, but the vehicle subsequently left the United States for France. M. Davin Maron of Marseille was the gentleman who acquired the vehicle at this time, reportedly with the engine in need of some work, at which time it is believed that a period correct, replacement unit was fitted. In February of 1980, the Ace-Bristol was exchanged for an Alfa Romeo, and would soon be back in the US. The next known owner, the late Mr. Tom Mittler of Mishawaka, Indiana, bought the car in 1989 and it entered his legendary collection of sports and racing cars.

Today, this desirable LHD AC Ace-Bristol is offered from a prominent Los Angeles-based collection, and is sporting the traditional British Racing Green paint and black leather interior it wears so well. Records indicate that a brake service was conducted on the car in recent times, and many accompanying items such as the tonneau, soft top, side curtains, and jack have been retained and is sold with the car. A traditional English sports car in every sense of the word, this AC Ace satisfies every need of a true motoring enthusiast: a smooth inline-6, swooping bodylines, and wind in your face. A fine example such as this will continue to be an object of desire for many decades to come.

Please note, the title for this vehicle will be in transit