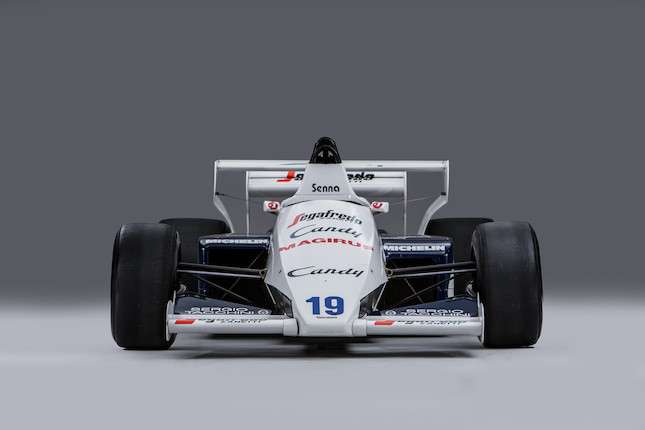 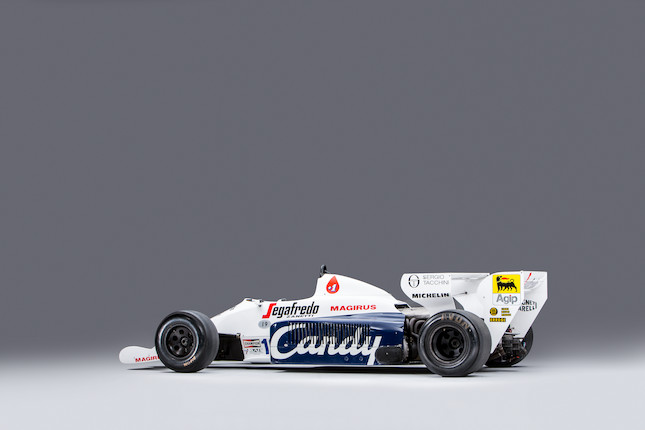 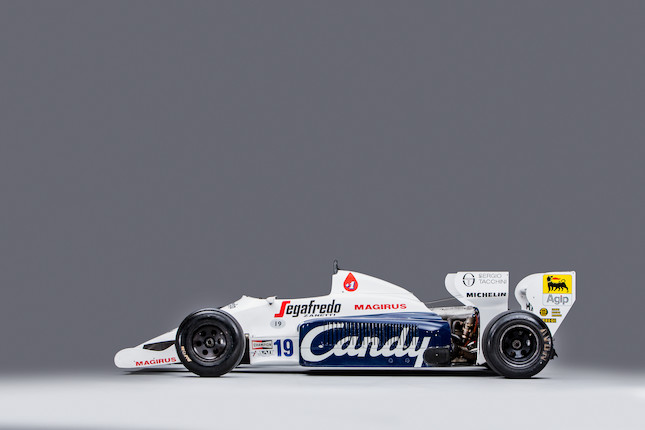 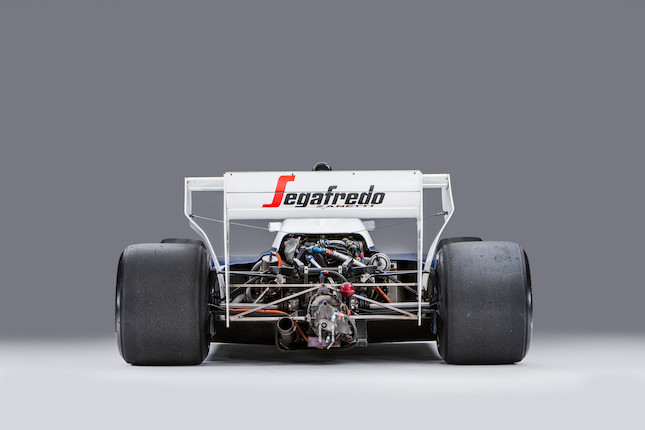 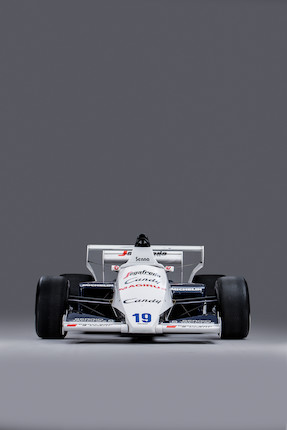 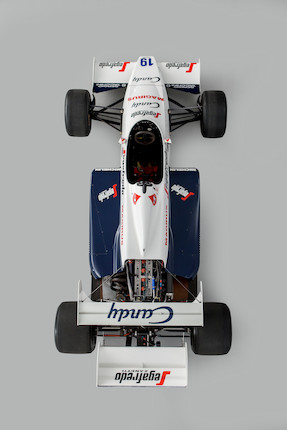 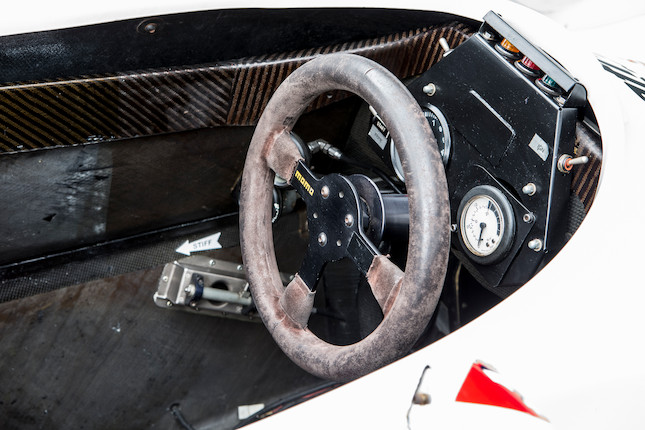 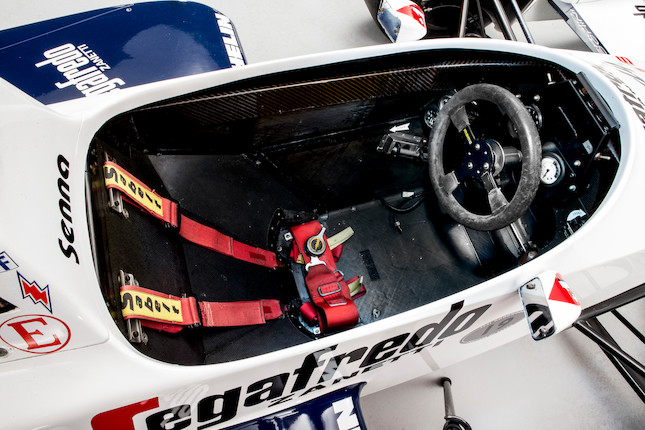 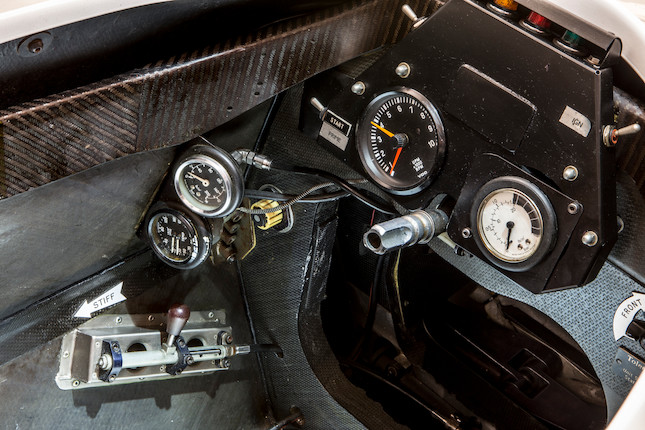 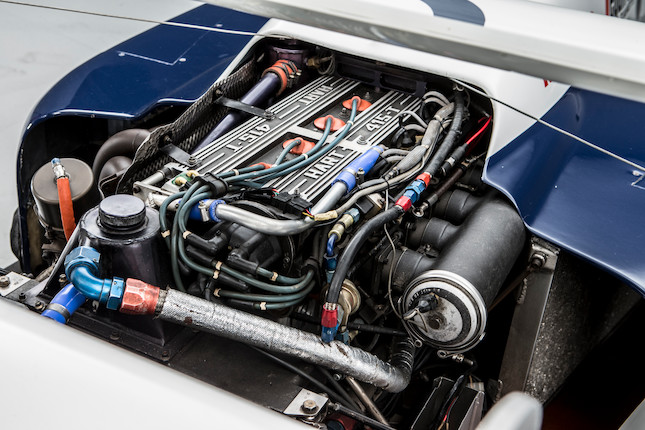 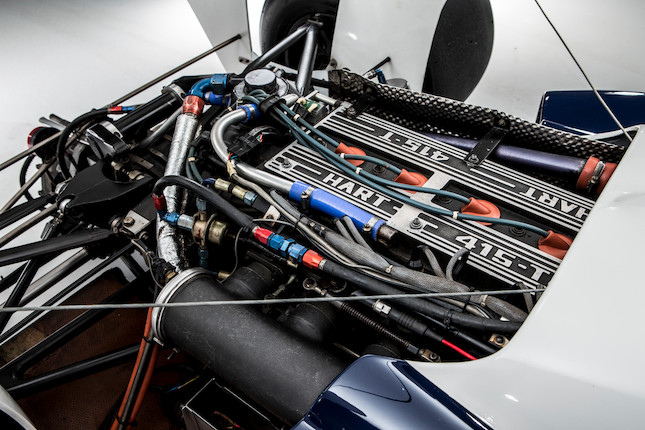 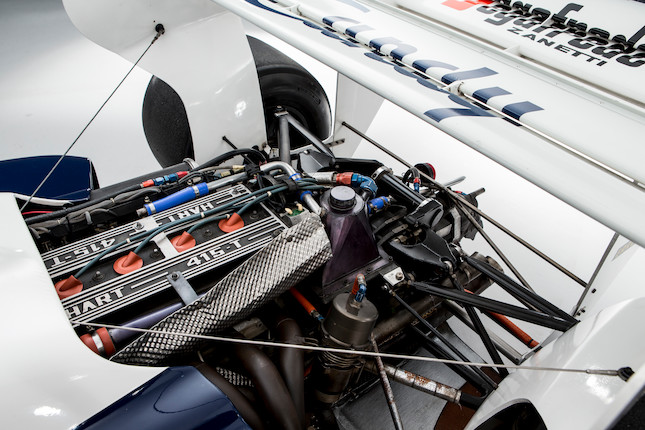 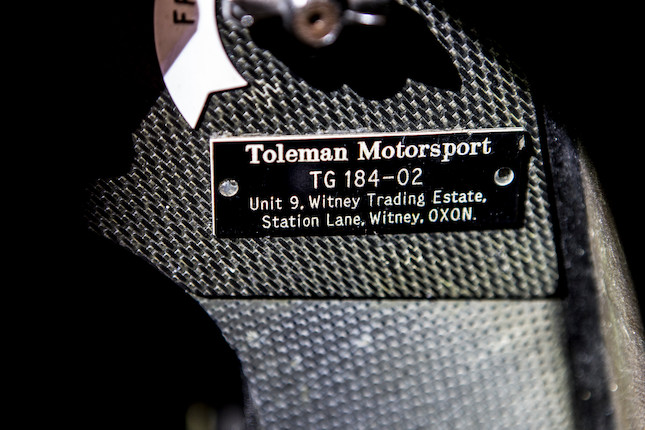 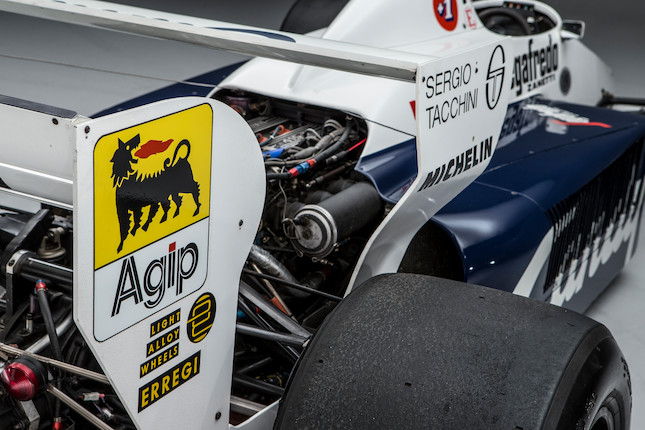 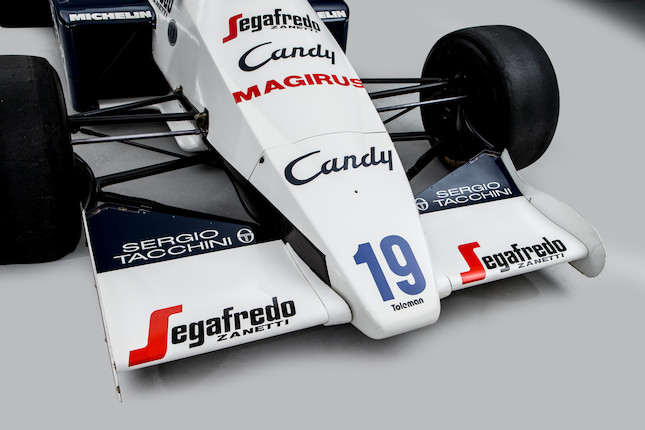 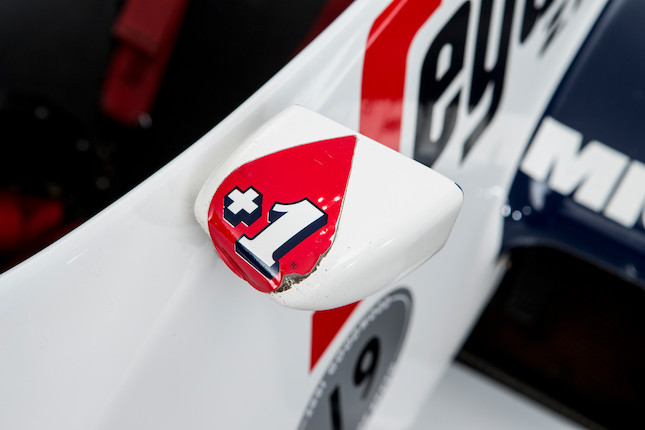 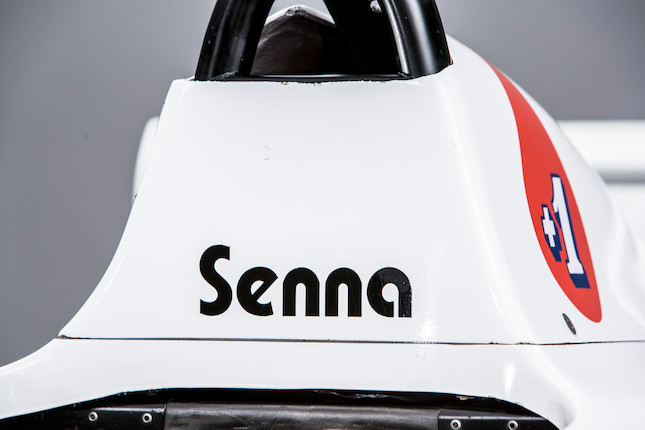 Here we at BONHAMS are privileged to offer not only the legendary Ayrton Senna's last Monaco Grand Prix car – see Lot XXX – but also his very first – this 1984 Toleman-Hart TG184, chassis number '02'. This is the car in which the brilliant Brazilian really exploded onto the Formula 1 scene, hunting down Monaco Grand Prix race leader Alain Prost – troubled by braking problems in atrociously wet, rain-soaked conditions, to challenge strongly for the race lead. It was only his sixth (?) Formula 1 drive but Senna was closing so fast it seemed inevitable that he would somehow find a way past the French superstar's leading McLaren-TAG Turbo and potentially win at Monaco in his first Formula 1 season.

However, what then transpired contributed perhaps to the brilliant Brazilian's future – and equally legendary – personal feud with Prost when they became team-mates together at McLaren in the later 1980s – trading the Formula 1 Driver's World Champion title to-and-fro between them.

On Monaco Grand Prix race day in 1984 the local weather conditions were so appalling that it became obvious the event could not run its full distance of 76 laps without exceeding the FIA's strict two-hour duration limit. In his 1½-litre, 4-cylinder, 600bhp Toleman-Hart, Senna was chasing-down race leader Alain Prost's more powerful McLaren-TAG Turbo MP4/2. The mercurial Brazilian new boy was catching the established French superstar at the staggering rate of 3 seconds per lap.

Ayrton Senna, in this very Toleman-Hart, had started the race in ninth place. He had then splashed and plumed his way up through the field to establish himself in second place, and he had closed the gap behind Prost to barely 7 seconds – and closing at an accelerating rate - when race director Jacky Ickx (the Belgian former Formula 1 driver) and Monaco Automobile Club secretary Michel Boeri controversially had both the red flag and the chequered flag shown simultaneously, bringing the race to what many considered to be a premature end, after only 31 laps. Prost therefore took the win from new boy Senna, the margin of victory being 7.446 seconds.

In fact, when the red and chequered flags were both shown as the drivers reached the end of lap 32, Prost had slowed and hesitated just short of the finish line and Senna swept by, waving ecstatically, convinced that in the car offered here he had just won his first World Championship-qualifying Grand Prix - and at Monaco - the most glamorous venue of them all...

In fact, as was customary in Formula 1, the race results would be declared as the positions pertaining at the end of the last previous uninterrupted lap, and so Prost was confirmed as the winner after 31 officially recognised laps, with Senna second in this Toleman-Hart TG184 chassis '02 now offered here.

However, while it seems almost certain that Senna would have wrested the race lead from Alain Prost after just one or two more laps, it is doubtful that his car could then have survived much longer. His Toleman team mechanics reported post-race that its suspension had suffered damage and would likely have soon failed after the Grand Prix had been so abruptly abandoned. By such slender margins is sporting history written...

Most presciently, during the closing stages of the 1984 Monaco Grand Prix, 1976 Formula 1 World Champion Driver and BBC TV commentator James Hunt, announced the true emergence of Senna upon the Formula 1 scene. He declared on air: "I think we are watching the arrival of Ayrton Senna as a truly outstanding talent in Grand Prix racing..."

The Toleman-Hart TG184 which Senna campaigned that season of 1984 was designed by Rory Byrne and Pat Symonds, and at the time of Ayrton's stupendous Monaco drive, this particular chassis was still fresh from its debut as-new in the preceding French GP at Dijon-Prenois, from which he had been forced to retire due to turbocharger failure on the slimline car's 4-cylinder in-line Hart power unit. Emphasising his potential for future greatness, Senna's subsequent 1984 season in the Toleman-Hart saw him add to his maiden podium placing at Monaco with third-place finishes in both that year's British and Portuguese Grands Prix.

He would drive this particular Toleman-Hart TG184 – chassis '02 – in that year's Canadian, Detroit, Dallas and British Grand Prix races – finishing 7th in Montreal – then crashing in Detroit - retiring with a driveshaft failure in Dallas – before finishing a fine third in his final appearance in this individual Grand Prix car in the British event at Brands Hatch, where one report greeted his success with the line "Third, Senna, the brilliant new shooting star in the Formula 1 constellation..." – and the star driver of this sparklingly well-preserved and historic Toleman-Hart.

The extremely capable Stefan Johansson then raced this car again in both the European Grand Prix at the Nurburgring in Germany, and in the Portuguese Grand Prix at Estoril. At the Nurburgring Johansson was forced into retirement by overheating, while in Portugal he finished 11th after running as high as 6th place overall and ahead of Niki Lauda's McLaren-TAG Turbo MP4/2.

Some measure of the low-budget, underdog, Toleman-Hart TG184's true class within the contemporary Grand Prix field is offered by this passage from the annual 'Autocourse' covering the 1984 season and in this case describing action during that Portuguese Grand Prix: "Niki was having a look down the inside of just about every corner all the way round the circuit as he weighed up the possibility of passing Johansson, but the Swede was driving brilliantly, making not the smallest slip which would allow Niki to get his McLaren alongside.

" 'I simply couldn't believe the speed of that Toleman on the straight', said Niki afterwards, 'I eventually had to wind my boost up to well beyond qualifying level and go down the outside of him into a tricky left-hander...as I came across in front of him I tagged his nose which was a bit unfortunate....'.

"Stefan who had been wondering why the hell Lauda had been sitting on his tail for lap after lap, not making – in his view – any serious effort to come past, shared Niki's view of the situation. 'Unfortunate? I was livid', he grinned at the end of the race. This slight contact meant that Johansson lost the best part of two laps in the pits having the nose wing replaced. On his return to the fray he set the third fastest lap of the race, behind the two works McLaren-TAG Turbo cars. For certain he would otherwise have been fourth..." behind Toleman team-mate Senna...who finished third in the sister car, Toleman-Hart TG184 chassis number '05.

The Toleman Group – headed by successful businessman, motor racing enthusiast and sometime competitor Ted Toleman – had been involved in various forms of racing through the 1970s before moving into Formula Ford 2000 in 1977. Toleman's primary business provided a huge fleet of car transporters delivering new stock from British motor industry factories to docks and distributors.

In 1978 the Toleman Group's growing racing interests entered driver Rad Dougall in a Formula 2 March, and it was during that season that the company hired the services of multi-talented young South African design engineer Rory Byrne, ex-Royale Racing. But through 1979 the Toleman team ran Ralt cars for Dougall and Brian Henton – who took second place in the year's Formula 2 Championship, while Dougall placed fifth.

In 1980 the first Toleman-titled racing car emerged - the Formula 2 TG280 model, designed by Byrne and engineered by John Gentry. Powered by a Hart 4-cylinder engine and running on Pirelli tires, the cars dominated 1980 Formula 2 racing with team drivers Brian Henton and Derek Warwick finishing 1-2 in the Championship. This success then encouraged Ted Toleman and team director Alex Hawkridge to announce that the team would be entering Formula 1...

After considering a turbocharged engine from Lancia, the team decided to remain faithful to British engine builder Brian Hart. Team drivers would be Brian Henton and Derek Warwick. The Rory Byrne-designed Toleman TG181 appeared in 1981. The team received a baptism of fire, as Henton and Warwick failed to qualify to start on raceday in all events entered until Henton finally made the cut at Monza in September. Derek Warwick qualified in the last race of the year at Las Vegas. In 1982 upgraded TG181s were run for Warwick and Italian driver Teo Fabi until that August when the first carbon-composite chassised Toleman TG183 was ready. While deployed only twice in 1982 Warwick set fastest race lap in the Dutch Grand Prix at Zandvoort.

The Toleman TG183B for 1983 was then a much more effective design, and with sponsorship from domestic appliance manufacturer Candy, truck maker Magirus and BP Oil the machines were driven by Derek Warwick and Bruno Giacomelli. Warwick scored Toleman's first World Championship points by finishing fourth in the year's Dutch Grand Prix before scoring in all three of the subsequent qualifying rounds, in Italy, the European GP at Brands Hatch and in South Africa. The Toleman team took ninth place in the year's Formula 1 Constructors' Championship.

This success catapulted Warwick into the major Renault works team for 1984 while Toleman signed up new rising star Ayrton Senna and Venezuelan racing motor-cyclist Johnny Cecotto for the new season. Backed by sponsors Segafredo and Magirus, Ayrton Senna achieved the team's first podium finish with his Monaco Grand Prix exploits and finished third in the British Grand Prix at Brands Hatch. Sadly, that weekend saw his team-mate Cecotto badly hurt in a practice crash and the team ran just one car for Senna in the German, Austrian and Dutch GPs.

The ambitious Brazilian was then suspended by Toleman from the Italian GP because he had signed a contract with the rival Team Lotus for 1985 (ignoring his Toleman contract). It was then that Stefan Johansson took the drive and finished fourth. The second Toleman TG184 there was driven by Pierluigi Martini in qualifying but he failed to make the cut. The Senna/Johansson duo then completed the year's race programme.

Toleman subsequently built its first TG185 in-house monocoque for 1985, when the Benetton group entered a three-year sponsorship agreement with Ted Toleman. After the struggling team scored no points that year the team was sold to Benetton for 1986 and subsequent times.

Consequently, this Toleman-Hart TG184 is not only the great Ayrton Senna's first Monaco Grand Prix mount, and the first to secure a podium finish for the British marque. It also represents the high-tide of the Toleman team's Formula 1 achievement – an historic turbocharged Formula 1 car of true distinction – and we commend it for the closest possible consideration.