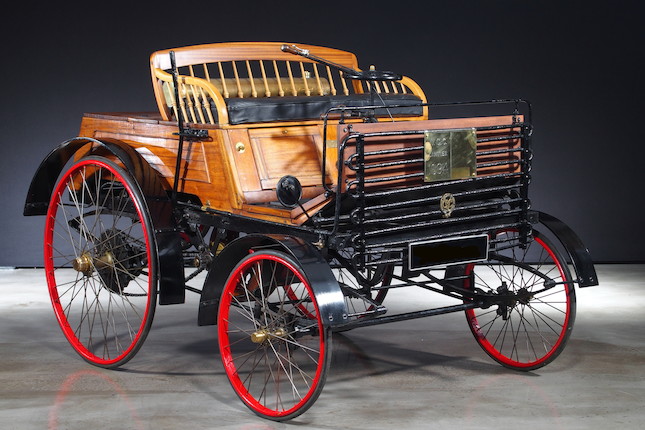 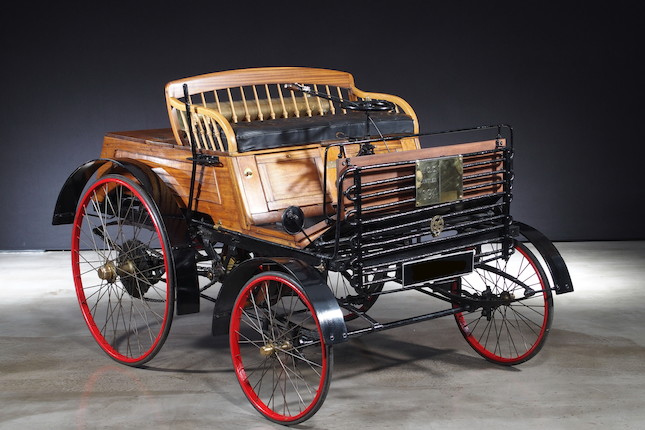 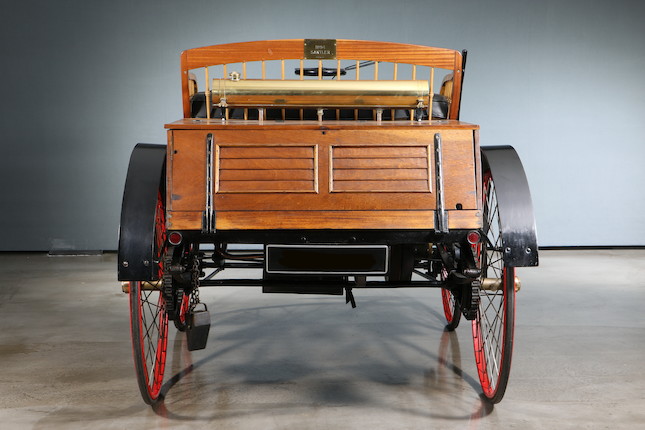 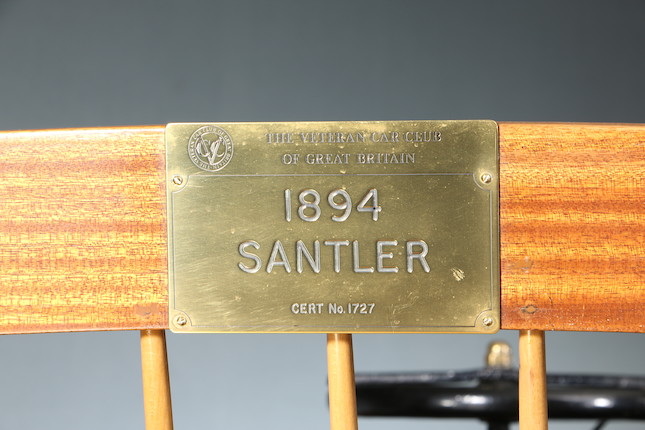 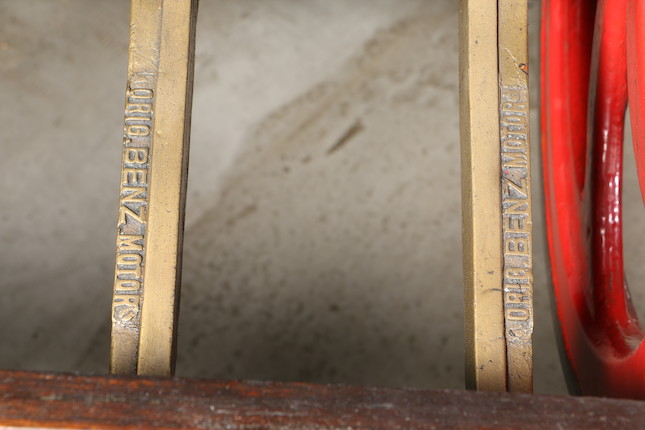 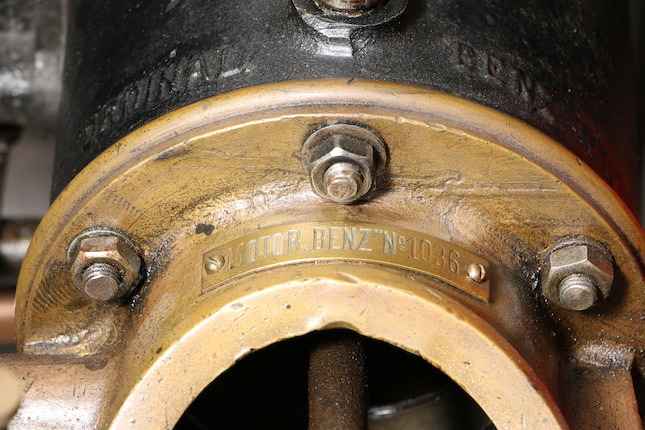 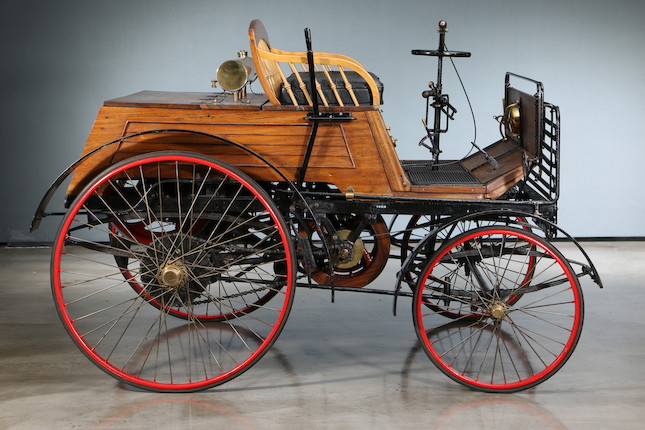 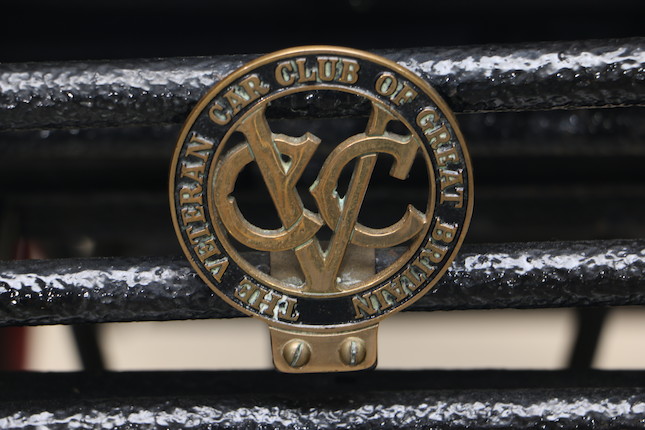 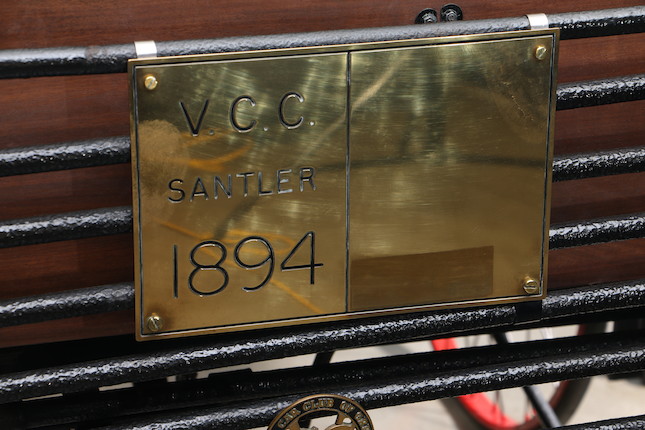 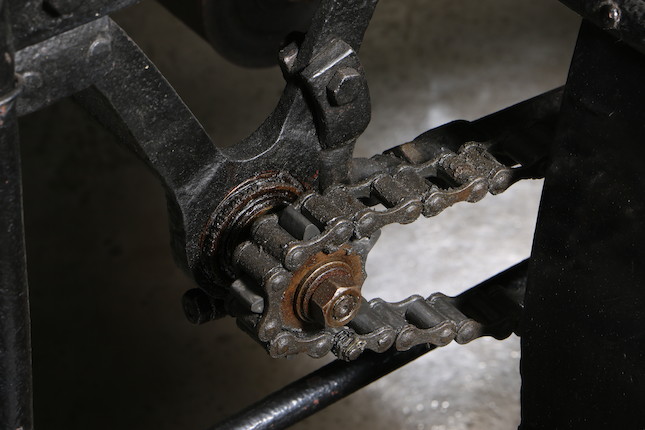 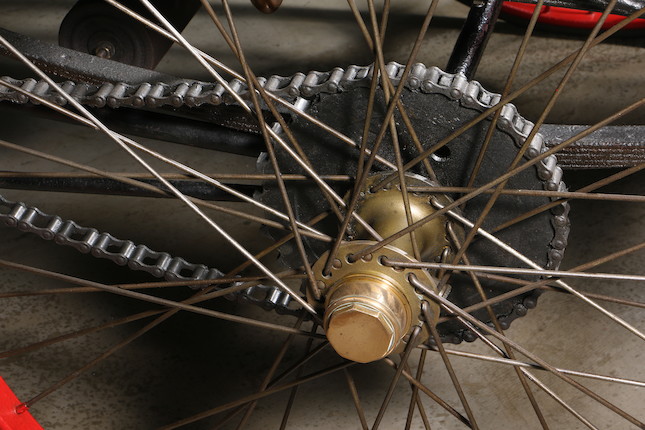 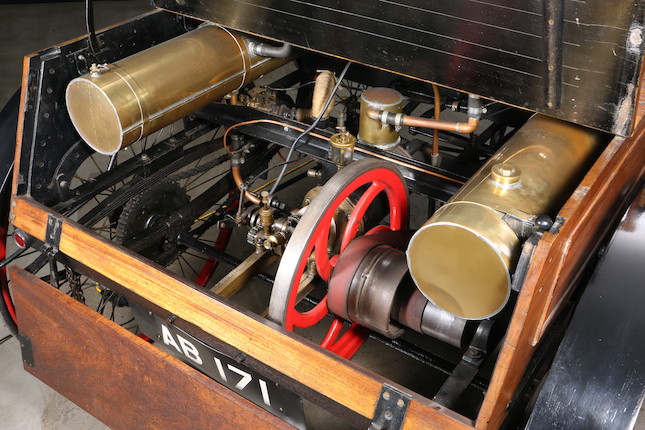 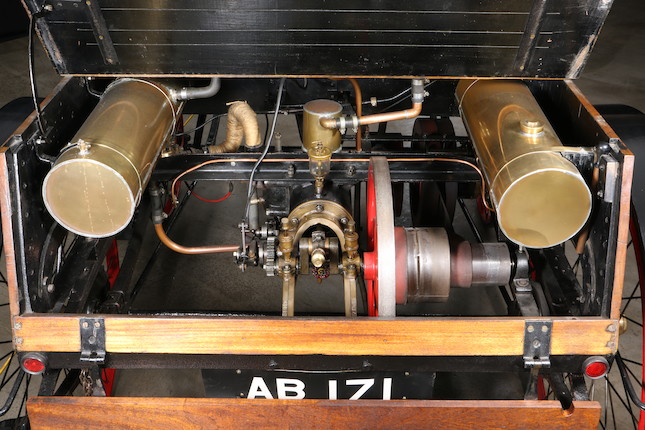 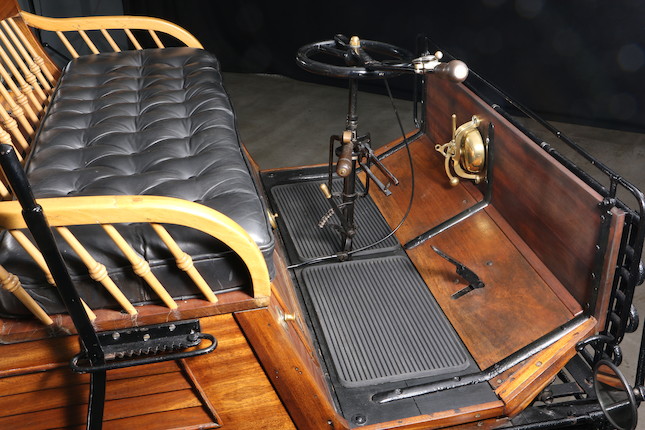 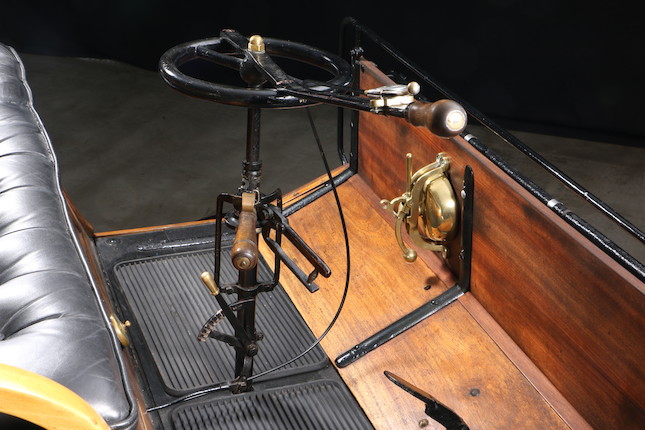 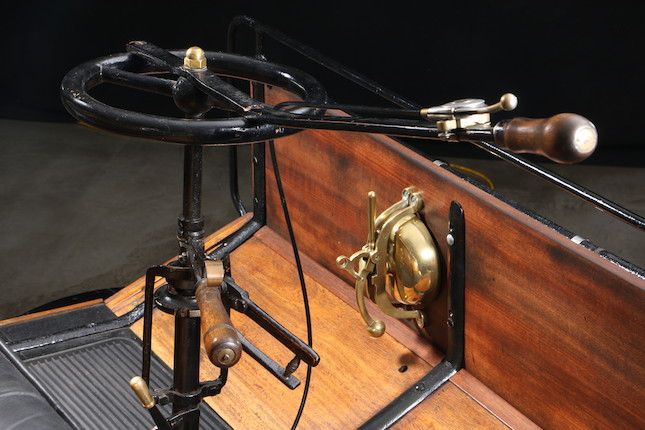 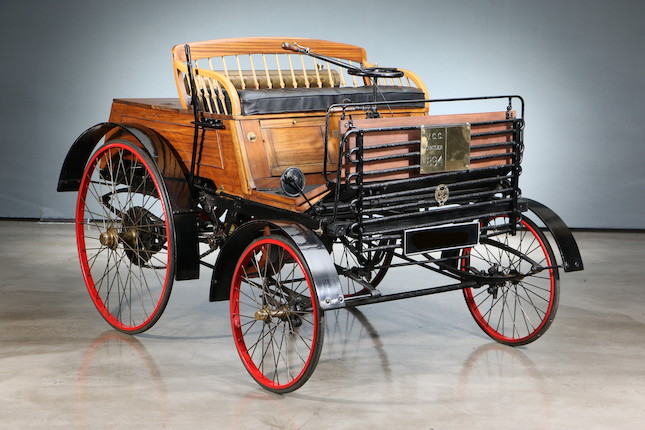 Some 20 years before the first Morgan three-wheeler emerged from Malvern, the Santler brothers had built a primitive automobile in this genteel Worcestershire spa town. After training as an engineer, Charles Santler went to work in his father's business in 1885. Established some ten years previously, the Santler company installed steam engines, water wheels, and 'turbeens' (turbines), as well as undertaking general engineering activities. The firm also made bicycles, which it marketed under the 'Malvernia' name.

Around 1887, the brothers commenced the construction of a steam-powered vehicle with a triple-expansion engine and vertical boiler, which was mounted a short rectangular frame, almost four feet wide. According to Charles Santler, this vehicle was run on the roads in 1889, an illegal activity under the provisions of the so-called 'Red Flag Act' of 1865 (amended 1878). This Act required that any mechanically propelled vehicle should be accompanied by a crew of three. As this was something of a problem with a two-seater, the Santlers abandoned their project, removing the steam engine but keeping the chassis and running gear.

Around 1891 or 1892, the chassis was retrieved and a twin-cylinder horizontal gas engine installed, which was supplied from a cylinder of compressed coal gas slung beneath the front of the frame. Evidence for the location of the gas tank is still visible. Such an engine's relatively low power output, and the lack of range conferred by the limited size of the gas tank, made this version no more practical than the first. Once again the unsuitable power unit was discarded, and sometime later a petrol engine was installed, believed to have been a small, vertical, water-cooled single.

Charles Santler later recalled that this latest experiment using the steam car chassis and petrol engine was well before the 'Locomotives on Highways Act' of 1896, which removed many of the existing restrictions. It is believed that the petrol engine was used to power a second experimental motorcar, as reported by the Malvern News in January 1897. A photograph taken around 1907 shows the original Santler automobile laid up in the local blacksmith's yard.
As part of Malvern's celebrations marking the coronation of HM King George V in 1911, the engine-less Santler was removed from storage to take part, being displayed with a notice calling it 'Ye Old Malvern Trackless Car'. A further notice behind invited people to push. A photograph of this occasion survives. The vehicle seems then to have gone back into storage. It was already laid up by the time cars had to be registered and carry an identification number, and was never formally registered by the Santlers.

The Santlers went on to build a few more 'one offs', followed by a limited series of light cars in 1914/1915, these being the first vehicles they ever offered for sale. After WWI they offered the three-wheeled Rushabout, superficially similar to the locally built Morgan. The Rushabout lasted until circa 1922, after which there were no more Santler motorcars.

In the 1930s, with interest in Veteran cars growing, the original Santler was discovered by John Mills, who took it to his home in Leamington, Warwickshire. Mills interviewed Charles Santler and obtained paperwork relating to the car, though much of it was lost during a wartime air raid. Fortunately, the car itself escaped undamaged.

In the 1950s, the Santler was acquired by Alec Hodsdon, a professional harpsichord maker and enthusiastic restorer of Veteran cars. Hodsdon restored the frame, running gear, and bodywork, but realised that a non-running vehicle was of only limited interest. Accordingly, he obtained a 3½hp single-cylinder water-cooled Benz engine, which, with some chassis modifications, was successfully installed with the Veteran Car Club's approval. At this time the vehicle was generally referred to as the 'Malvernia', after the premises that the Santlers had moved to in 1896.

The next owner was Sir John Briscoe, who kept the vehicle for some 20 years. It subsequently passed through several other hands prior to being acquired in 1985 by the immediately preceding owner, Dr Alan Sutton, who undertook painstaking research in Malvern, the Public Record Office, and elsewhere into the Santlers, the car's origins, and its history. Almost all that is known about this vehicle is the result of Dr Sutton's work, which led to various magazines articles and the book 'Malvernia', published in 1987 by the Michael Sedgwick Memorial Trust. Analysis of the information gathered, plus detailed examination of the vehicle itself, led the Veteran Car Club Dating Committee to conclude that an appropriate manufacturing date was 1894, and that the name 'Santler' was more appropriate than 'Malvernia'. Dr Sutton also secured the (non-transferrable) registration mark, 'AB 171', which had originally been issued to a Santler car of 1901.

Dr Santler owned the car for longer than any previous owner - apart from Charles Santler, of course - and drove it many more miles. While in his ownership, the Santler regularly took part in VCC events and completed the Brighton Run several times, the last being in 1986 commemorating the Centenary of the original Run of 1896. It was also on loan to the Coventry Motor Museum for a few years. Dr Sutton still has the original photographs mentioned plus a considerable file of information.

Carrying a varnished wooden body, the Santler's chassis consists of an angle-iron platform with full-elliptic suspension front and rear, and is of right-hand drive configuration with wheel/tiller steering. Transmission is by belt, with 'fast and loose' pulleys to a countershaft and chain drive to the rear wheels. There is a band-type foot brake operating on the offside rear wheel, and hand-operated 'spoon' brakes on the rear tyres, while the wheels are wire spoked: 28"/40" front/rear, shod with solid rubber tyres. The car as illustrated is entirely Dr Sutton's work, including a finger-operated trigger on the steering lever, which is connected by Bowden cable to the carburettor butterfly valve, an arrangement that makes operating the speed control safer in today's traffic.

Surviving 19th Century British motorcars are exceedingly rare, regardless of the type of power unit. The Santler belongs to this exclusive group. It possesses a continuous history and has been regularly used in recent years both in Veteran Car Club events and the London to Brighton Veteran Car Run.

The Santler formed part of a prominent private collection from 2001 to circa two years ago when it was acquired at a UK auction by the current vendor, and we are advised by them that it has been serviced and prepared for the London-Brighton Run. A wonderful opportunity to acquire a unique vehicle that has its origins in the pioneering years of the British motor industry.

Bonhams would like to thank Dr Alan Sutton for his assistance in preparing this description.