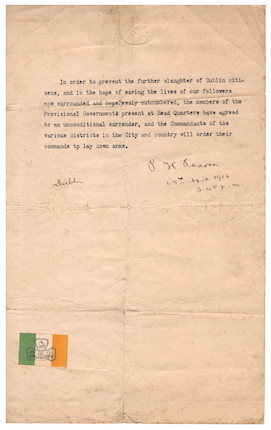 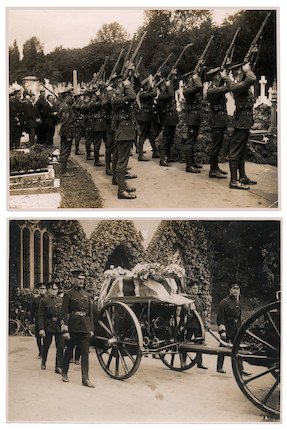 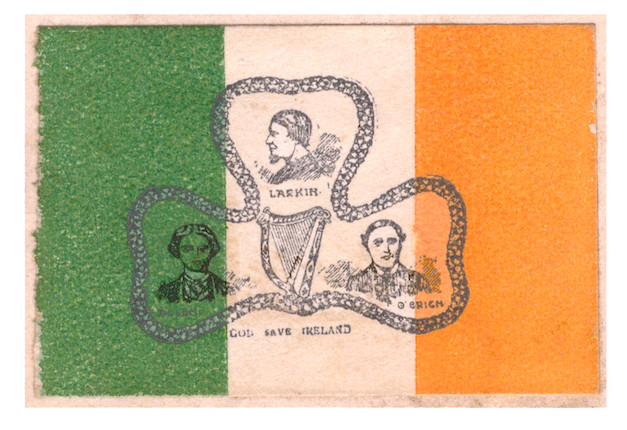 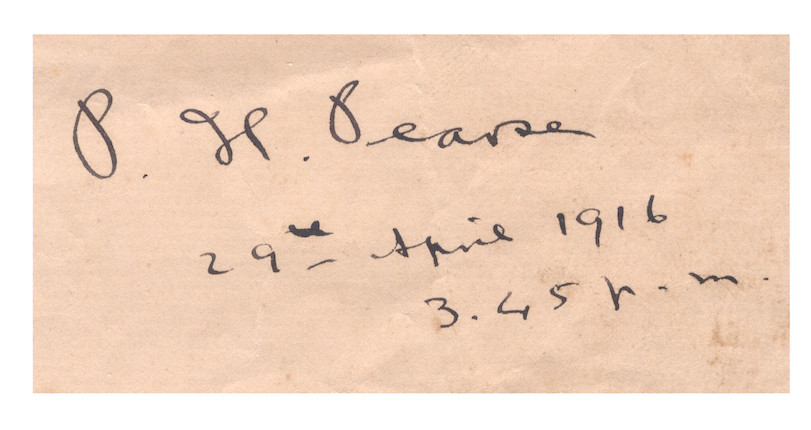 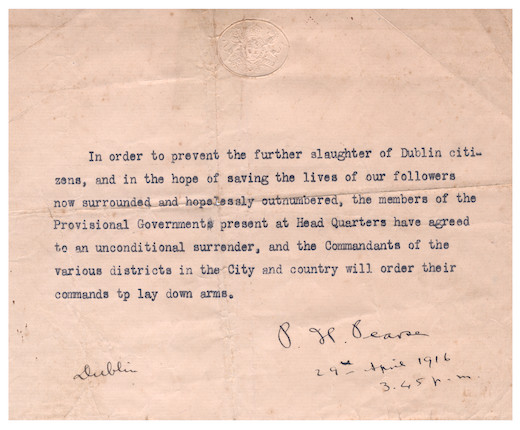 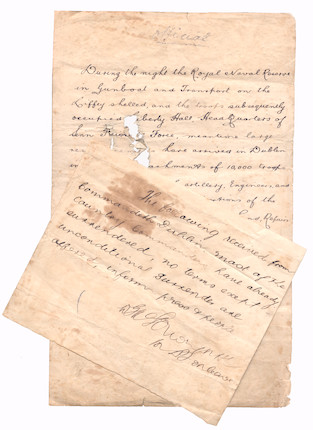 Lot 215
IRELAND – PATRICK PEARSE & THE EASTER RISING
The Order of Surrender, typed and signed ("P. H. Pearse") and dated ("29th April 1916/ 3.45 p.m.") 'THE MEMBERS OF THE PROVISIONAL GOVERNMENT...HAVE AGREED TO AN UNCONDITIONAL SURRENDER': PATRICK PEARSE SETS IN HAND HIS OWN MARTYRDOM, bringing with it the birth of modern Ireland. One of the key documents in modern Irish history.
Fine Books, Atlases, Manuscripts and Photographs
14 June 2017, 13:00 BST
London, Knightsbridge

The Order of Surrender, typed and signed ("P. H. Pearse") and dated ("29th April 1916/ 3.45 p.m."), stating "In order to prevent the further slaughter of Dublin citizens, and in the hope of saving the lives of our followers now surrounded and hopelessly outnumbered, the members of the Provisional Government present at Head Quarters have agreed to an unconditional surrender, and the Commandants of the various districts in the City and country will order their command tp [sic] lay down arms.", on paper blindstamped with the British royal cypher and with a gummed label showing the Manchester martyrs on a tricolour background, creasing, dust-staining and creases at folds, 328 x 204mm., Dublin, 3.45 p.m., 29 April 1916

'THE MEMBERS OF THE PROVISIONAL GOVERNMENT...HAVE AGREED TO AN UNCONDITIONAL SURRENDER': PATRICK PEARSE SETS IN HAND HIS OWN MARTYRDOM, bringing with it the birth of modern Ireland.

I write it out in a verse -
MacDonagh and MacBride
And Connolly and Pearse
Now and in time to be,
Wherever green is worn,
Are changed, changed utterly:
A terrible beauty is born.
(from 'Easter 1916' by W. B. Yeats)

One of the key documents in modern Irish history. With Pearse's 'unconditional surrender' the Easter Rising of 1916 was seen as a military disaster but within a very short space of time it became a great symbolic victory for the cause of Irish nationalism. The brutal suppression of the Rising by the British and the execution of its leaders led to a groundswell of popular support for Irish Independence resulting in the victory of Sinn Fein in the elections of December 1918, the war of independence, and the creation of the Irish Republic in 1921.

On Easter Monday, 24 April 1916, a thousand members of the nationalist Irish Volunteers led by schoolmaster and Irish language teacher Patrick Pearse - Richard Ellmann numbers James Joyce amongst his pupils - joined with James Connolly's Irish Citizen Army and 200 women of Cummann na mBan, to seize key locations in Dublin and proclaim an Irish Republic from their headquarters at the General Post Office. The British response was swift and uncompromising. Their use of heavy shelling and artillery met with stiff resistance from the rebels, resulting in heavy casualties, particularly among civilians, and widespread destruction. Pearse, as leader of the rebels, had been inspired by 'romantic and morbid fascination with people who had died in hopeless revolt' (Ruth Dudley Edwards, ODNB). In practice, he was appalled to see the bloodshed amongst the innocent civilian population, and after seeing three civilians with a white flag shot down outside the last rebel headquarters in Moore Street, was prompted to surrender unconditionally to Brigadier-General Lowe, thereby offering himself up as a martyr to the cause.

The surrender order itself was composed at the British army headquarters at Parkgate Street after a brief meeting with General John Maxwell, British Commander-in-Chief, and, as a final ignominy, typed on British headed paper (the spelling error in ours testifies to the speed at which this was completed). Copies were distributed to the disparate rebel positions around the city by Nurse Elizabeth O'Farrell, who had acted as messenger between the rebels and the British during the surrender negotiations, with the assistance of members of the Capuchin community. It was not until the next day that rebels in outlying areas reluctantly put down their arms as word reached them and they received further written reassurances from Pearse from his cell at Arbour Hill Barracks that the surrender order was genuine. Our copy bears a tricolour stamp printed by the rebels at the time of the Rising depicting William Allen, Michael Larkin and William O'Brien, the 'Manchester Martyrs', who were hung in Manchester for killing a police constable during a failed rescue attempt of two Fenian prisoners. The stamp was possibly affixed to authenticate the order, but may equally have been added at a later date.

Pearse was executed by firing squad at Kilmainham Goal a few days later: 'Yeats thought him 'a dangerous man; he has the vertigo of self-sacrifice'... As the figurehead of the rising, and the author of memorable verse and prose in which militarism was equated with heroic self-sacrifice, Pearse became the most famous of the fifteen executed rebels and the centre of a powerful mythology...' (ODNB). He wrote to his mother from prison two days before he died: 'Our deeds of the last week are the most splendid in Ireland's history...we shall be remembered by posterity and blessed by unborn generations...' (The Letters of P.H. Pearse, ed. Seamas O'Buachalla, 1980).

It is not known exactly how many typed copies were made but it is thought to be in single figures. Of surviving copies, one of two typed orders held by the National Library of Ireland would appear to be the carbon undercopy of our document (MS 15,000/2/1) as it bears the same error and correction. Another signed by Pearse and countersigned by James Connolly and Thomas MacDonagh, is held at the Imperial War Museum (Doc.9614). The National Museum of Ireland holds two handwritten versions (HE.EW.848 and HE.EWL.133), one from 29 April and dated 4.45 p.m., just an hour after ours, and another from the day after. The final handwritten order of surrender was sold at auction in 2005 and remains in private hands, being currently exhibited at the G.P.O. Dublin Witness History exhibition. None bear the tricolour stamp.

The letter is accompanied by two undated notes, one presumably written on the 29 or 30 April and signed by a member of the Royal Irish Constabulary after the surrender; 'The following received from Commandeth [sic] Dublin. Most of the country commanders have already surrendered, no terms exept [sic] unconditional surrender are offered, inform press & people'; the other reporting the destruction of Liberty Hall by British troops on 26 April 1916 in the mistaken belief that members of the Irish Citizen Army were within, docketed 'Official' in pencil at the head with the words 'God save the King', obscured, at the foot, reporting confidently that 'During the night the Royal Naval Reserve in Gunboat and Transport on the Liffey shelled, and the troops subsequently occupied Liberty Hall, Headquarters of Sinn Fein Force, meantime large reinforcements have arrived in Dublin...The situation is well in hand, Repairs to line being rapidly fixed'.

The order of surrender and supporting documents also bear witness to another bloody episode in the history of independence. They come by descent through the family of two R.I.C. men, a father and future son-in-law who were Head Constable and Sergeant at the time of the Easter Rising - the great-grandfather and grandfather of the present owner. It is believed that the great-grandfather, George Mcdonagh, was given the order of surrender by District Inspector Percival Lea Wilson whilst they were stationed together at Gorey in Co. Wexford. Wilson was assassinated in June 1920 on the orders of Michael Collins, supposedly in retaliation for having mistreated the rebel leader, Thomas Clarke, four years earlier. A group photograph of their R.I.C. unit and two press photographs of Wilson's military funeral are included in the lot.