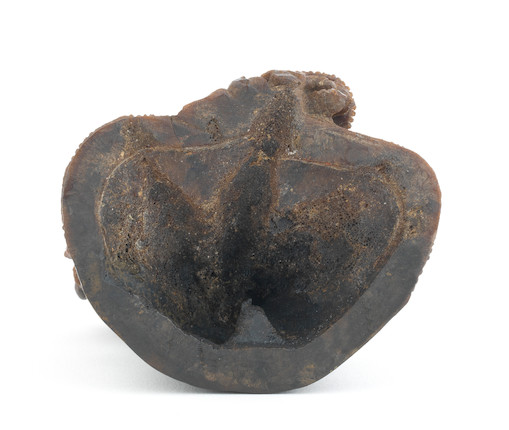 Our Chinese Ceramics & Works of Art specialists can help you find a similar item at an auction or via a private sale.

Nepal, 17th century
The deity expertly carved seated in lalitasana on a double-lotus base with a beaded upper edge, the left foot resting on a lotus bloom issuing from the base, the left hand raised in vitarka mudra, the face depicted with a serene expression and crowned with a five-leaf tiara atop neatly tied back hair, two lotus stalks twining around the limbs and extending upwards to the shoulders, the figure elaborately adorned with beaded jewellery, traces of red pigment. 9.2cm (3 5/8in) high.

Three-dimensional figure carvings in rhinoceros horn from the Himalayan regions are rare due to the scarce availability of Sumatran rhinoceros horn there. The present lot depicts the female goddess Green Tara, worshipped by followers in Nepal and Tibet and displays the same form and decoration as gilt-bronze figures of the Goddess from the region.

Rhinoceros horn figural carvings were highly esteemed in the Himalayan regions as demonstrated in documentation of a number of such carvings being made by the 10th Karmapa, Chöying Dorje (1604-1674), who was a famous teacher of the Karma Kagyu tradition of Tibetan Buddhism and well known as an artist in the mediums of painting, metal casting and carving. On the thirteenth day of the first month of the Tibetan New Year 1645 the 10th Karmapa and his attendant fled to Mentang Shuktser (sman thang bzhugs 'tsher) in northern Lhodrak, where they stayed for seven days. During this short stay, the Karmapa made for his loyal attendant a statue of Vajrapani from a mixture of herbs and clay. They then left for Tsari where they stayed for four months, during which time the Karmapa again found occasions to create art. He produced a Hayagriva statue of medicinal herbs and clay and carved a Tara from rhinoceros horn, which he presented to the Tsang Khenchen; see I.Mengele, 'The Artist's Life' in The Black Hat Eccentric; Artistic Visions of the Tenth Karmapa, New York, 2013, pp.33-63.

The 10th Karmapa is also said to have carved in rhinoceros horn the representation of the five first patriarchs of the Kagyu lineage; see Lama Kunsang, et al, History of the Karmapas: The Odyssey of the Tibetan Masters with the Black Crown, Boulder, Colorado, 2012, 148. See also a set made from rhinoceros horn of the figures of Vajradhara, Tilopa, Naropa, Marpa and Milarepa, preserved in Rumtek Monastery and believed to have been made by the 10th Karmapa, illustrated on Himalayan Art Resources website (HAR nos.60153-60157). Compare also a painted rhinoceros horn carving of Padmasambhava, Tibet or Bhutan, 18th century, illustrated in Art Sacré du Tibet: Collection Alain Bordier, Paris, 2013, p.209, no.106.