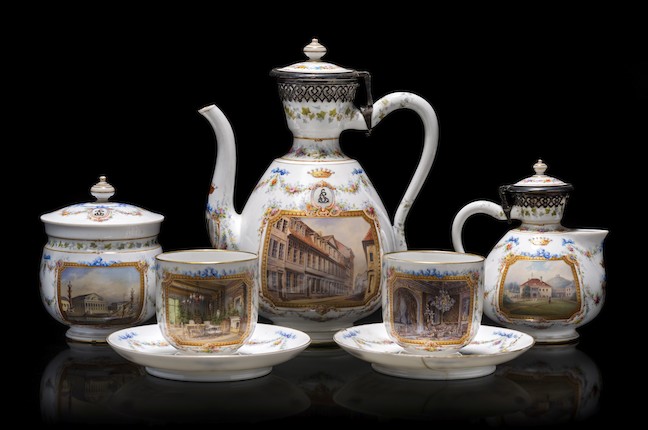 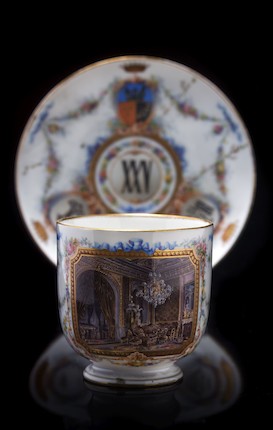 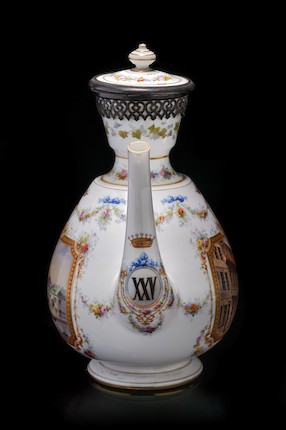 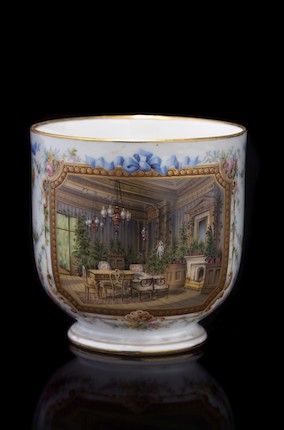 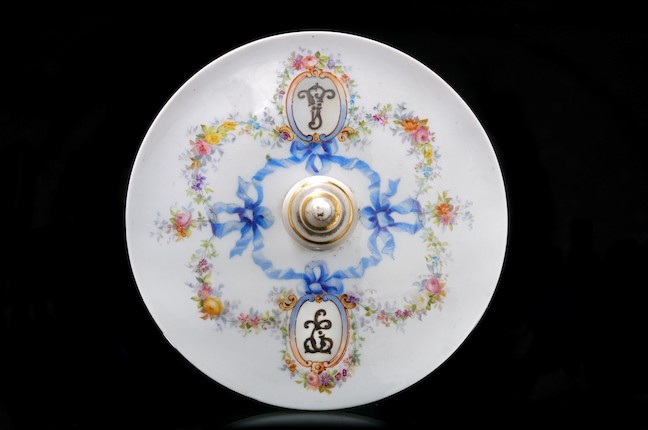 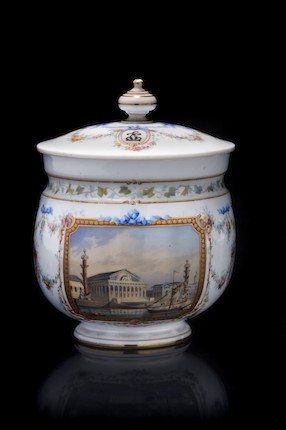 Our Russian Paintings and Works of Art specialists can help you find a similar item at an auction or via a private sale.

Imperial Porcelain Factory, period of Alexander II, about 1866
comprising tea pot, and creamer with openwork metal collars, lidded sugar bowl, two cups and saucers decorated in the Rococo taste, the reserves finely painted by Timofei Semenov with architectural scenes of significance to Baron Alexander Stieglitz and his wife Carolina Ernestina whose monograms appear as well as the Baron's coat of arms and dates marking their twenty fifth anniversary, 7.VI.1841 and 7.VI.1866 (7)

The proposed breakfast service was completed in 1866 at the Imperial Porcelain Factory in St. Petersburg to mark the 25th wedding anniversary of Alexander Ludwigovich Stieglitz (6 (01) September 1814 – 24 October 1873) and his wife Carolina-Ernestina Stieglitz (née Miller, June 24, 1818 - 11 March 1873) («Русский провинциальный Некрополь», М.,1914.С.969) Baron Stieglitz was the most prominent Russian financier, industrialist and philanthropist of his day in addition to being Governor of the State Bank of Russia, Privy Counselor, founder of the Central School of Technical Drawing and donor of its subsequent museum. The service is enriched with the monograms of its owners 'AS' and 'CS' as well as dated on the saucers commemorating their wedding on 7.VI.1841 and their 25th anniversary on 7.VI.1866.

The Baronial crown and the coat of arms of the Stieglitz family also appear in the decoration of the service. Alexander's father, Ludwig Ivanovich received the title for his services to government and trade upon the occasion of Nicholas I's 1826 coronation and in 1828 he was raised to merchant class. The coat of arms incorporating a black eagle adorns the two saucers and the pearled coronet appears throughout the service.

In Russia, the fashion for breakfast services appeared at the end of the 18th century. From this time, these kind of sets were favoured as expensive gifts due to the individually chosen motifs for the decorative scenes. Thus, on the Stieglitz family service, the principle elements of the scenic décor are architectural views evoking various milestones of the family's history. For the "Emperor's banker", the views of the banking house, palace, family dacha, textile manufactory and the Stock Exchange held personal significance.

According to the historian BV Anan'ich, the Stieglitz name was as popular worldwide as that of Rothschild. 'Emperor Nicholas I quite simply showered the banker with awards': for his success in arranging Russian loans in Europe he was presented with a gold snuff-box with a diamond set imperial cipher for his labour and diligence, he was awarded the Orders of St. Vladimir 3rd degree, St. Anne 2nd degree, and St. Stanislaus 1st degree ". ( Цит. по: Ананьич Б.В. Банкирские дома в России, 1860-1914. Л., 1991. С. 15.) Baron Stieglitz was so highly valued by Nicholas I and later Alexander II that we can assume the service was gifted by the august family.

Focusing on the pictorial vignettes we find each enclosed in rectangular frame outlined with applied gilding. The most critical to the professional activities of the Stieglitz holdings – the State Bank and the Exchange are found on the sugar bowl of the service. In 1846, Baron Stieglitz was elected Chairman of the Exchange Committee. He was considered to be the king of the St Petersburg Stock Exchange and held the monopoly of the imperial accounts. Baron Stieglitz became the first governor of the State Bank of the Russian Empire established in 1860 by Alexander II. A view of one of the bank buildings form the Griboedov Canal adorns the other side of the sugar bowl.

In addition to banking and trade, Stieglitz founded manufacturing enterprises. In 1845-1851, Stieglitz built two factories in Narva, Estonia. He decided to build his summer residence nearby as he had ties to the region, having graduated from the University of Dorpat. The image of the Baron's manor estate on the bank of the Narva River is featured on the service's milk jug. In the illustration, we see a two storey timber manor in the traditional style, crowned with a turret and incorporating richly carved terraces and balconies. Later in 1890, the house passed down to A. Stieglitz' heir, his adopted daughter's husband, the State Secretary A.A. Polovtsov, and provided the setting for a meeting between the emperors of Russia and Germany: Alexander III and Wilhelm II. Following this meeting, a photo of the baron's dacha (photographer Creek) was published in "World Illustration" in the August 25th 1890 issue providing a basis of comparison for the image presented on the porcelain milk jug.

One side of the teapot from the breakfast service depicts a view of the English Embankment where the banking house Stieglitz and Co was located. Nearby was the family home at number 68. Baron Stieglitz commissioned the architect A.I. Krakau to build a palace adding to the land previously acquired by his father. This new design incorporated parts of the original dwelling that are visible on the scene captured on the teapot.

The splendid décor of the Stieglitz palace amazed visitors to its interiors. The mansion's study is captured on one of the dishes. Its details became widely known due to the drawings of the Italian artist Luigi Premazzi (1814-1891) who chronicled a great many parade interiors in imperial palaces and aristocratic mansions. Five years after the palace's completion, A. Stieglitz commissioned drawings of the parade interiors from Premazzi. The master produced seventeen watercolors documenting the décor in minute detail and currently preserved as an album in the Hermitage collection.

The second cup is decorated with an image of the drawing room at the Stieglitz' dacha on Stone Island in St Petersburg. The early 19th century wooden building had been inherited from Baron Ludwig and captured by I.A. Goh (Е. Анисимов «Императорская Россия», СПб., 2011, С. 516). The villa on Stone Island was periodically updated, first by the architect A. Kutsi and later A. I. Krakau accounting for the variations between the scene on the porcelain teacup and that depicted by Goh, although the principle features of the walls, beams, fireplaces and interior décor are immediately recognizable in the porcelain version.

The vignettes on the tableware were executed by Timofei Semenov from the dynasty of craftsmen who specialized in landscape painting for the Imperial Porcelain Factory. His initials "T.S", located in the lower right corner of the porcelain teapot, reveal the identity of artist responsible for the porcelain service's architectural scenery.

The service is decorated throughout with floral garlands, rocaille scroll and other decorative elements characteristic of the "second Rococo" style. The middle of the 19th century marked the height of popularity for table and dessert services incorporating decorative elements and colours from 18th century French Fetes Galantes. This dovetailed with the neo-Rococo (second Rococo) style favoured by Russian aristocratic society in the 1860's and 1870's.

Empress Maria Alexandrovna (consort of Alexander II) championed the aesthetics of the 'neo-Rococo' at the Imperial Porcelain Factory, determining the focus for the forms and the decoration of its output. As a result, porcelain production recalled famous French designers of the Rococo style N. Pineau, G. Oppenordt, J. Meissonier and others. As in the 18th century, the 19th century revival favoured new rococo as a cabinet style for the art of porcelain, retaining the characteristic lightness and elegance of the Louis XV taste.

The picturesque views illustrate the most significant backdrops to the von Stieglitz' life together interpreted in neo-Rococo style throughout the porcelain service marking the 25th wedding anniversary of Alexander and Carolina. Its survival to present day and most importantly, its ownership within the Stieglitz family makes this work one of the most valuable historical examples of Russian Imperial porcelain during Alexander II's reign.

We are grateful to Dr. Ekaterina Khmelnitskaya, Curator of Russian Porcelain, The State Hermitage Museum for providing this note and access to supplementary illustrations.