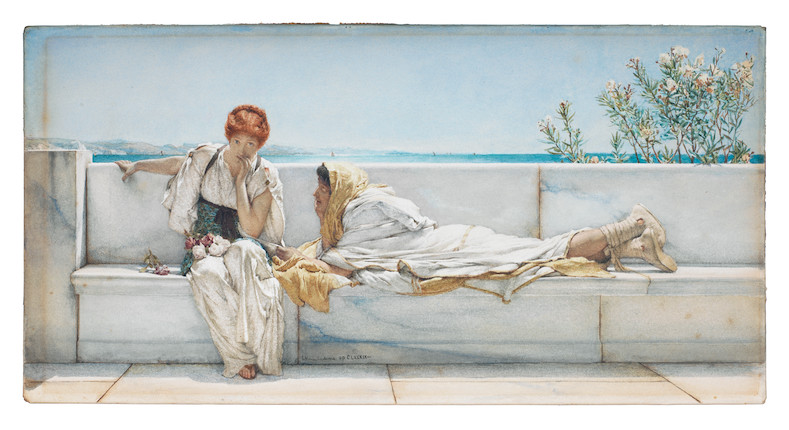 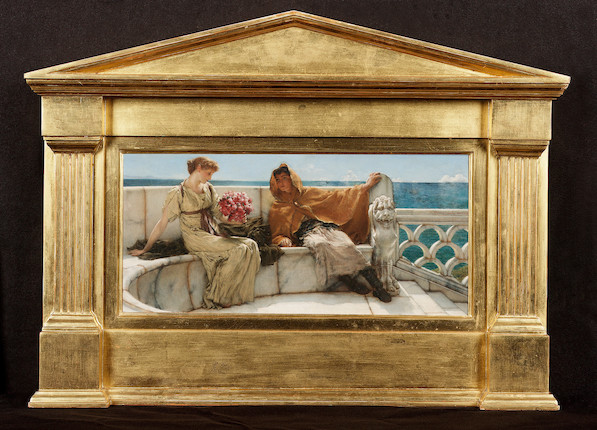 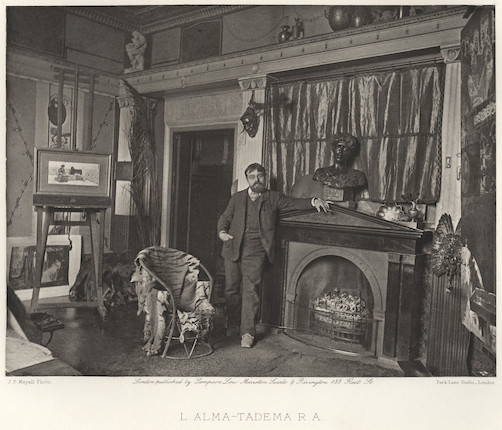 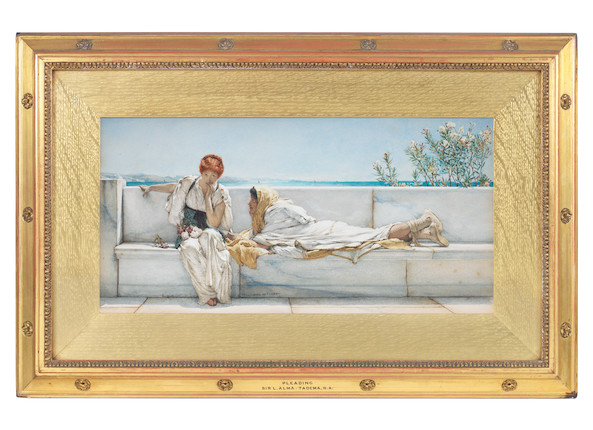 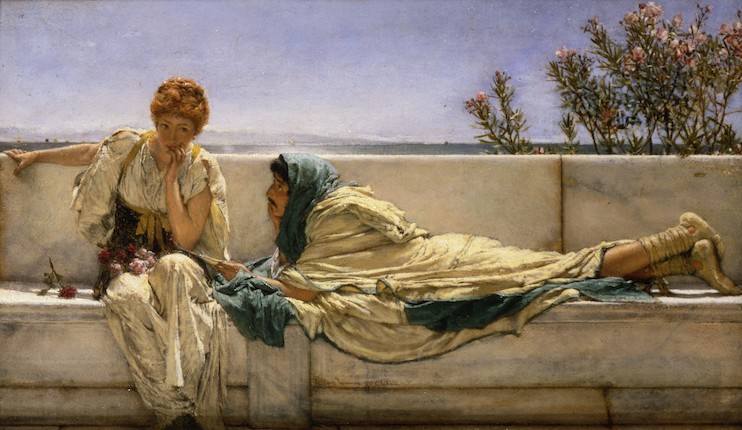 Our 19th Century & Orientalist Paintings specialists can help you find a similar item at an auction or via a private sale.

This newly discovered watercolour makes an important addition to the sequence of works by Lawrence Alma-Tadema that celebrate romantic love and courtship in the ancient world. It deploys a composition which was a particular favourite with the artist himself, his closest friends, and his wider public audiences: a young woman sits upright on a marble bench, listening to the entreaties of a young man who reclines beside her. The man places himself in an attitude of submission, gazing upwards at the woman. At the same time his pose, firmly ensconced on the bench with his feet crossed, suggests a certain determination: we sense that he will not give up his entreaty until the woman succumbs.

The artist's friends and patrons found this composition so irresistibly romantic that Tadema devised multiple versions of it. The present work, which dates from 1878, is the first of three known examples in watercolour: the others date from 1883, Op. CCLVIII (British Museum, London) and Op. CCLIX (Walters Art Museum, Baltimore; see below). Each time he painted the composition, Tadema retained the crucial relationship between the two principal figures—importunate male and meditative female—but he varied the details to make each one an independent work. In this case the variations are skilfully judged to make the most of the watercolour medium. The format is wider in relation to its height than any of the other versions, which gives the sense of a panoramic view over the marble parapet of the bench. Washes of watercolour indicate the blue waters of an expansive sea radiant in sunshine, and Tadema also exploits the delicacy of the medium to suggest the hills of the farther coastline with greater definition than in the other versions. A bravura touch, highly characteristic of the artist, is the depiction of minuscule sailboats on the water behind the figures. One of the tiny boats is piquantly perched just above the male figure's head—an amusing detail, but the juxtaposition also dramatizes the vast space implied by the picture's perspective, calling attention to the distance between the large-scale foreground figures and the sunlit background.

By the date of this watercolour, Tadema was famous above all for his painting of white marble: 'Marbellous!' quipped Punch in response to the marble setting of Sappho and Alcaeus of 1881, (Walters Art Museum, Baltimore). In this example, the brightest and blondest of the courtship pictures, Tadema uses the transparency of watercolour to suggest the colour of sun-drenched marble with the subtlest of light effects. Reflected sunlight just catches the chin and profile of the man, emphasizing the piquancy of his upturned glance, while the sun catches the ripples of the woman's golden-red hair. The sunlight also illuminates the top of her right arm, to call attention to the expertness of its foreshortening, but this is not just a painter's tour de force: the way the girl extends her arm behind her own back, so the hand just touches the marble parapet as if to steady herself as she thinks, succinctly conveys her irresolution.

Alma-Tadema was as meticulous in his business affairs as he was in his painting, and he kept track of his works (also guarding against forgeries) by assigning a unique opus number to each; the Latin word opus perhaps derives from musical composition but also suits Tadema's ancient settings, and he gave each opus a Roman numeral, in this case CLXXXIX. This, then, is the 189th work he made—or at least the 189th one he considered good enough to assign an opus number; all of his mature oil paintings have one, but Tadema only gave opus numbers to watercolours when he thought them particularly important or successful. That allows the work to be dated quite precisely to the early months of 1878, the time when Tadema and his closest friends were especially interested in the courtship composition.

The composition first appeared in an oil painting of 1876 entitled Pleading1 (Guildhall Art Gallery, London); that title remained strongly associated with the composition and was later added to the frame of the current work, whose original title was given in Tadema's work list as A Solicitation. The composition was an immediate success with the writers as well as the painters of Tadema's circle, who had a keen interest in debates of the period about whether the ancient Greeks and Romans had possessed a concept of romantic love. Against the arguments of some classical scholars, that romantic love was a modern invention, the distinguished German Egyptologist Georg Ebers maintained that romance was a universal human emotion, and dramatized this opinion in a sequence of historical novels. He was immediately inspired by the Pleading composition, which he saw in a version exhibited at Munich in 1879 (Colección Pérez Simón, Mexico City), to write a novella that narrated the love story of the two figures under the title Eine Frage (1880, soon translated into English as A Question). Subsequently Tadema borrowed the names of Ebers's fictional characters, Xanthe and Phaon, to make another watercolour version (the Walters version referenced above). Thus the two friends, Ebers and Tadema, influenced one another in turn.

Meanwhile, a longstanding friend of the artist, the Dutch author Carel Vosmaer, published The Amazon (1880, English translation 1884), a roman-à-clef whose hero was modelled on Tadema himself, with a love story that culminated in the Borghese Gardens in Rome, where the novel's fictional characters adopt the poses of the courtship composition. For his cousin, the Hague School artist Hendrik Willem Mesdag, Tadema painted a panel showing the courting figures on a bench in the background of a scene set in the Borghese Gardens (Mesdag Collection, The Hague). Yet another version borrows its title from a phrase that plays a key role in Vosmaer's novel, Amo Te, Ama Me ('I love you; love me'); this painting, which dates from 1881, is now in the Fries Museum, Leeuwarden.

The composition was also reproduced by Tadema's favourite printmaker, Leopold Lowenstam, who is shown at work on an etching of it in the portrait recently rediscovered on Antiques Roadshow (and featured on their Christmas special programme broadcast on 28 December 2016). A version with different details appears on the easel in a photograph of Tadema in his studio published in 1884 for a series on Artists at Home (see illustration); its inclusion in this context (intended for wide publicity) again indicates how popular the composition had become.

Whether or not it was made to replace a previous oil, the present watercolour is at the centre not merely of a compelling sequence of paintings by Lawrence Alma-Tadema, but also of a wider network of works, including novels and stories by his friends, which collectively explored the importance of romantic love to human experience across the ages, from antiquity to modernity. This rediscovered work is therefore of some importance to the study of Tadema's life and career, as well as a superb example of his skill as a painter in watercolour.

This work has been requested for the major retrospective exhibition of Alma-Tadema's work, Lawrence Alma-Tadema: At Home in Antiquity, at Leighton House Museum, London, 7 July – 29 October 2017.

We are grateful to Peter Trippi and Prof. Liz Prettejohn for their assistance in cataloguing this lot.

We are grateful to Dr. Vern Swanson for the additional information he has provided for the catalogue and for confirming the authenticity on the basis of photographs. The work will be included in Dr. Vern Swanson's catalogue raisonné of watercolours currently being prepared.