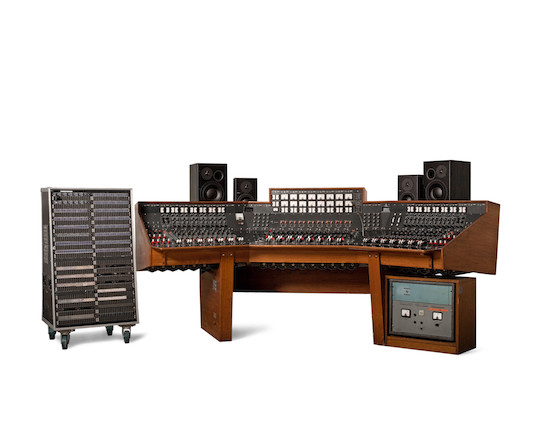 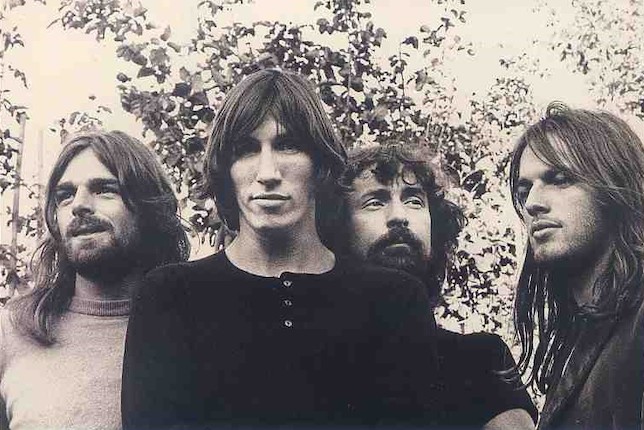 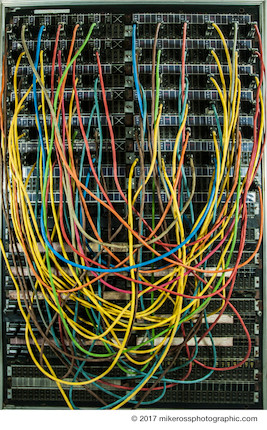 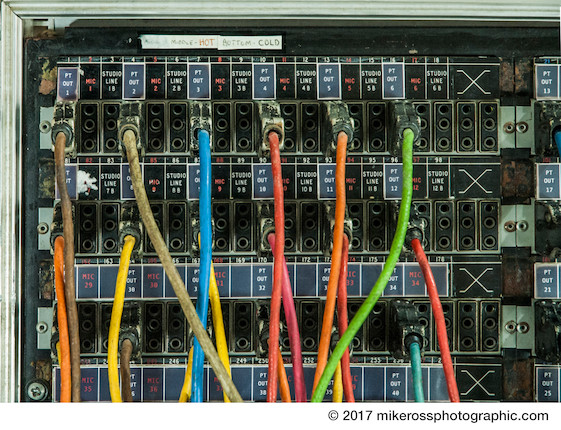 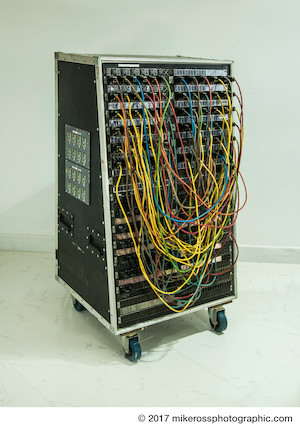 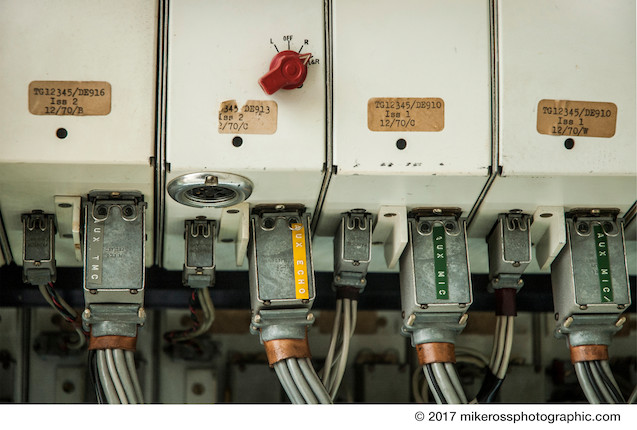 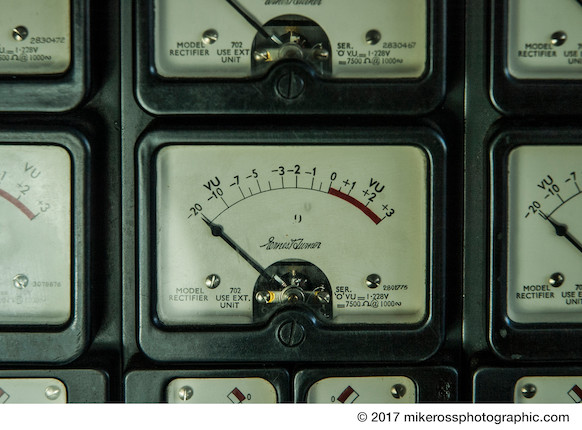 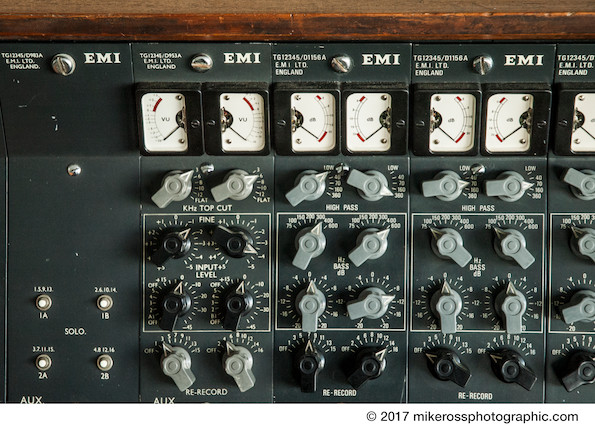 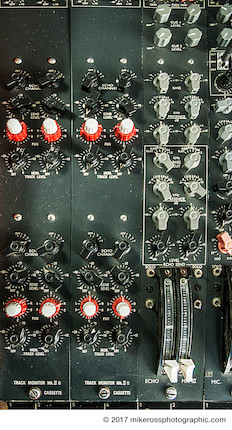 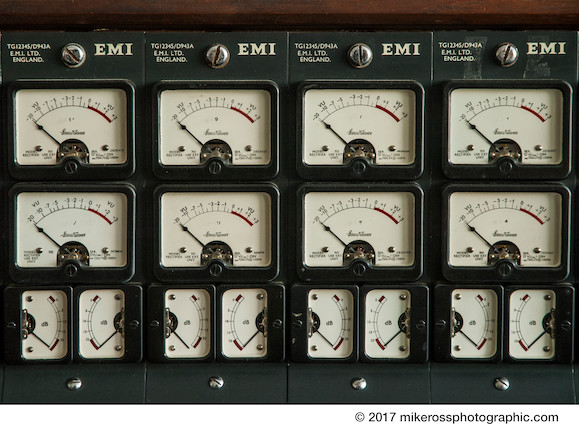 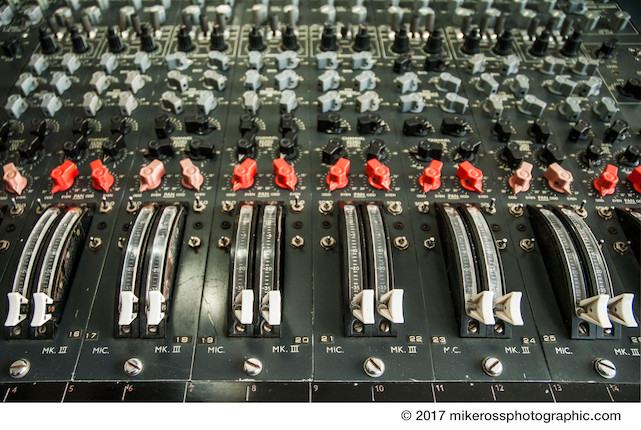 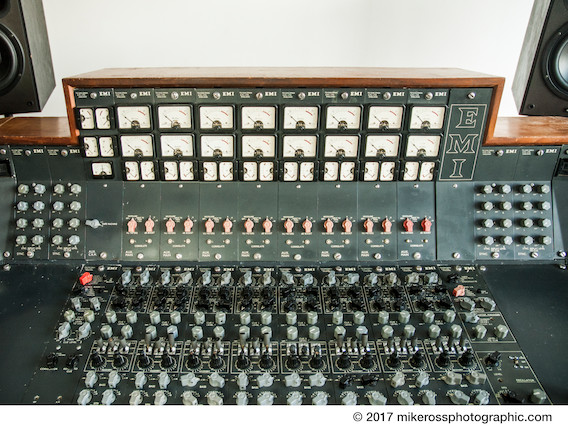 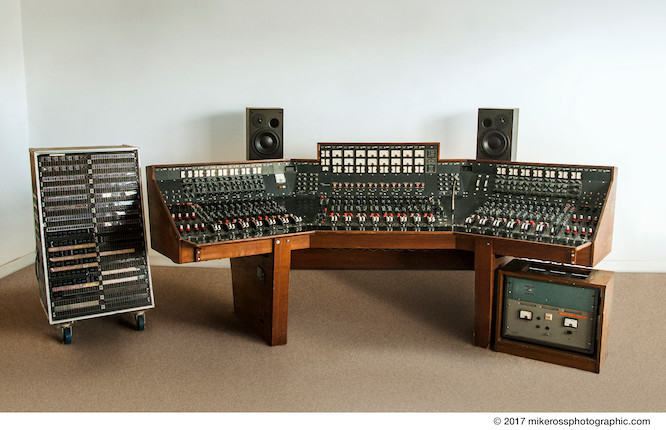 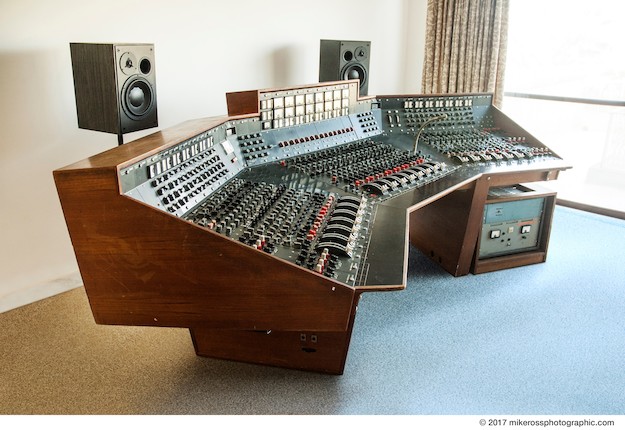 An Abbey Road Studios EMI TG12345 MK IV recording console used between 1971-1983, housed in Studio 2, the console which Pink Floyd used to record their landmark album, The Dark Side of the Moon.

Also used by many other artists including: Paul McCartney and Wings, George Harrison, Ringo Starr, Kate Bush and in later years The Cure, the desk comprising: 40 channels with limiter/compressor on each, 4 echo returns and 16 monitors, MK3 feature cassettes, track monitor cassettes, dual channel 16 track sync mixer, two banks of 12 pairs of microphone channels, 8 pairs of main channels to centre section, monitor level controls for tracks 1-8 on left and 9-16 on right side, Ernest Turner manufactured VU meters comprising 16 full size VU meters and approximately 50 channel VUs, quadrant radial faders by Painton, with approximately 1600 capacitors (many original), housed in the original semi-wrap-around frame made of block board with teak and mahogany veneer, which disassembles into three parts, together with a patchboy of steel encased in industrial standard flight case and made-to-measure freight crates for the console parts (speakers in the illustrated image not included); accompanied by letters concerning the provenance, including one from Ken Townsend, the Abbey Road Studio Manager at the time and future Chairman; a documented history from Brian Gibson, the renowned Studio Technician for Abbey Road and TG console world authority; a current technical appraisal stating the console is in working order; PDF manuals for the equipment; and a copy of the album The Dark Side of the Moon (1973) Harvest pressing. Images of the console in Abbey Road available on request.

Please note: This lot will be on view at Bonhams Knightsbridge in London March 19-27, and will not be on view in our New York offices.

The EMI TG 12345 MK IV console has been referred to as the greatest console ever constructed due to the collaboration with Abbey Road and EMI engineers, with the production of every component being built to military precision. Abbey Road studios was the recording studio of choice for experimental and progressive artists to use throughout the 1960s-1970s and is still a busy venue today. The sound recording of Pink Floyd's The Dark Side of the Moon is testament to the superior engineering of this recording equipment.

This recording console, located in Studio 2, was one of only two custom made by EMI engineers for Abbey Road studios. It was commissioned by Abbey Road to update the previous recording/mixing equipment from the MK II model, an eight-track console that had been well used from 1968, but which had become obsolete. David Gilmour recalls attending a meeting with the key staff at Abbey Road around 1967 to discuss the equipment upgrade. Abbey Road and their EMI engineers in Hayes wanted to go from their in-house designed REDD Valve mixing desk with four-track outputs to one with eight-track outputs. Gilmour remembers, "I said that they should ignore eight-track altogether and switch from four-track to 16-track; doing that would have saved them money and put them in front of most other studios." Pink Floyd wound up recording most of their 1971 album, Meddle, at George Martin's Air Studios, which already had the required 16-track setup.

EMI's engineers in Hayes got the go ahead to make a 16-track console, the MK III version, to follow the outdated MK II. This was, however, done without consulting the studio and did not meet the needs of their sound engineers and producers. The console was thus rejected by Abbey Road and in its place, EMI created the present MK IV using the key elements that Abbey Road loved from the MK II and combining it with components from the MK III.

In 1972 Pink Floyd was back at Abbey Road Studios ready to put down what was to be their momentous album, The Dark Side of the Moon. It had taken some time for the band to get over Syd Barrett's departure in the late 1960s. In his absence, Roger Waters and Dave Gilmour became the creative forces of the band. Waters devised the theme behind Dark Side. Author John Harris reports Waters saying, "I remember sitting in [Mason's] kitchen and explaining this idea; that the whole record might be about the pressures and preoccupations that divert us from our potential for positive action, if you like." Nick Mason elaborates in his book, Inside Out, A Personal History of Pink Floyd, that the album encompasses "Deadlines, travel, the stress of flying, the lure of money, a fear of dying, and the problems of mental instability spilling over into madness ... Armed with this list Roger went off to continue working on the lyrics." Following their live performances at the Rainbow Theatre in North London, they devised the tracks and some of the sound effects and were ready to start recording in the studio. The entire album was recorded at Abbey Road, the majority using the console in this lot from Studio 2. Alan Parsons, the album's producer, commented in an interview with Premier Guitar in 2012, "... the band members were experienced in the studio. They arguably were the most technically minded band out there. They knew what a recording studio was capable of, and they took full advantage. And they worked me hard—they always worked their engineers hard to push the barriers...." The superior production and engineering of this concept album produced a continuous flow of five tracks on each side. The quality and clarity of the recording has been praised, as Mason discusses: "Alan had acquired – as all EMI trainees did – a remarkably thorough knowledge of all aspects of working in a recording studio. He was a bloody good engineer. But he also had a very good ear and was a capable musician in his own right." The ethereal nature of the sound effects, the heartbeat that resonates in the intro and outro of the album as an undertone throughout, juxtaposed with the alarm clocks and sound of people running, had not been present on a concept album like this before. The clarity and depth of the effects obtained through the state-of-the-art equipment made them stand out all the more.

The album was released to critical acclaim and saw a huge turning point in the band's commercial success. Through this visceral album, they tapped into the feelings, imaginations, political endeavors and mysticism of the era. Released against a backdrop of the Vietnam War, the recent landing of man on the moon and a move from the era of flower power, this album hit the popular consciousness of the youth at the time. It remained on the charts for 741 weeks and was voted the number 1 Rock Album of All Time by Rolling Stone magazine in 2015.

Brian Gibson, the world authority on TG consoles and an ex-engineer from Abbey Road, has stated that the TG MK IV is recognized by the recording industry as the best sounding console in the world. The document included in this lot from Gibson states, "There had often been problems in the past with noise and extraneous noise pickup (radio signals) on the TG consoles and the MK IV continued this tradition ... In an attempt to solve these noise pickup problems the second MK IV console which was destined for Abbey Road studio 2 ... featured a revised interconnection design. Rather than a largely unsupported cable loom, the main interconnection wiring was built into steel trunking which was fixed to the inside of the console frame." The famous Studio 2 at Abbey Road gained notoriety following the Beatles' numerous recordings there during the 1960s; so much so that many artists insisted on using only this studio. It was also the hub for Paul McCartney and Wings, Ringo Starr, George Harrison and Kate Bush for some of their independent/solo work, all of whom recorded through the years while this MK IV was in use. (Images of McCartney and Kate Bush, both with this console, are available to view on request.) In the letter from renowned ex-Abbey Road Studio Manager Ken Townsend, which accompanies this lot, he states, "I can further guarantee that this console was installed in Studio 2 from 1971 to 1983. It is one of two which differed by their internal cableform."

In 1983 the TG MK IV console was deemed out-dated and an upgrade was necessary to meet current recording requirements. The vendor of this lot, Producer Mike Hedges, was working at Abbey Road at the time and purchased the console directly from the studios. Since then Hedges has housed the iconic console in his personal recording studio and has maintained it in excellent working condition. Some of these features can be viewed working in the recent footage recorded by Hedges in February of this year.

The sister console is currently housed at Prime Studios in Austria. It was brokered in 2011 between a studio in LA and a dealer of studio equipment.

Technical disclaimer
Electronic or mechanical parts may not operate or may not comply with current statutory requirements. You should not assume that electrical items designed to operate on main electricity will be suitable for connection to the main electricity supply and you should obtain a report from a qualified electrician on their status before doing so. If you yourself do not have the expertise regarding this lot, you should consult someone who does to advise you. We can also suggest experts relating to this specific console.

THE DARK SIDE OF THE MOON RECORDING CONSOLE REALISED $1.8 MILLION AT BONHAMS ROCK MEMORABILIA SALE