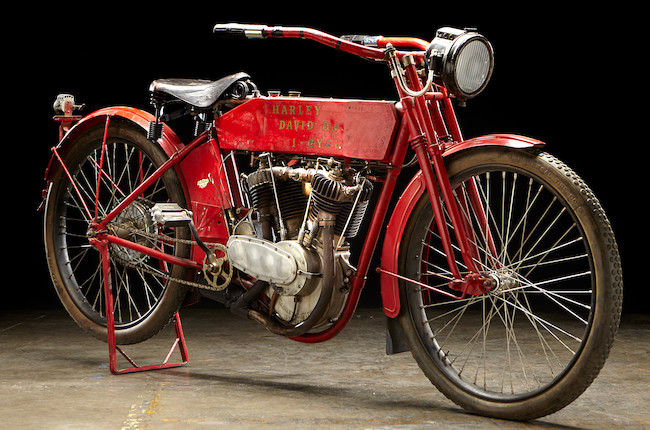 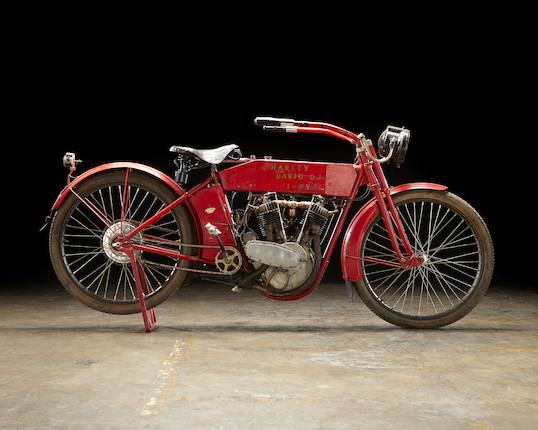 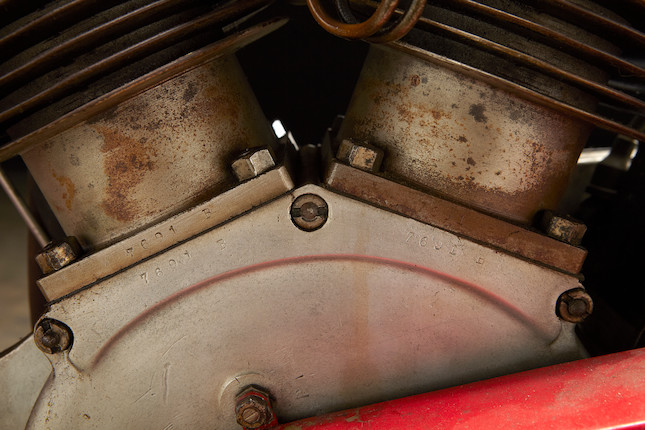 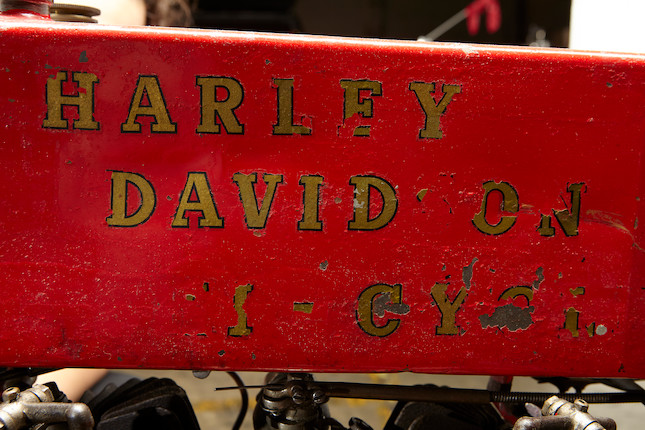 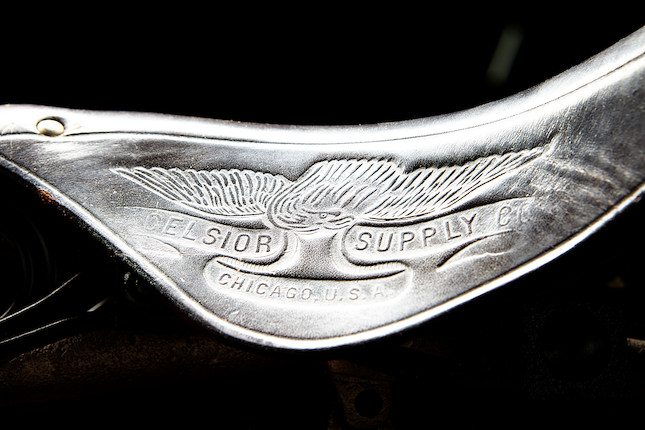 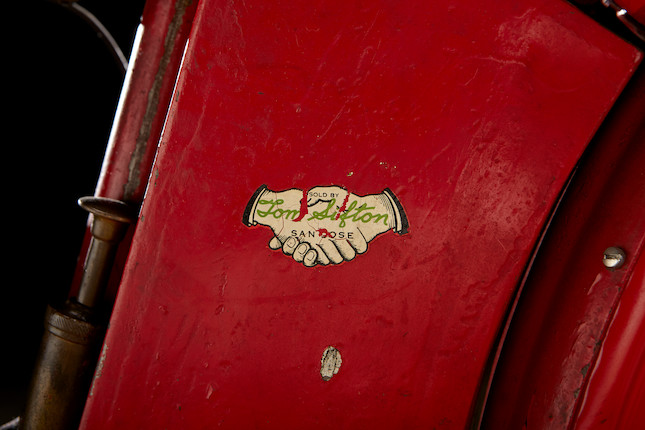 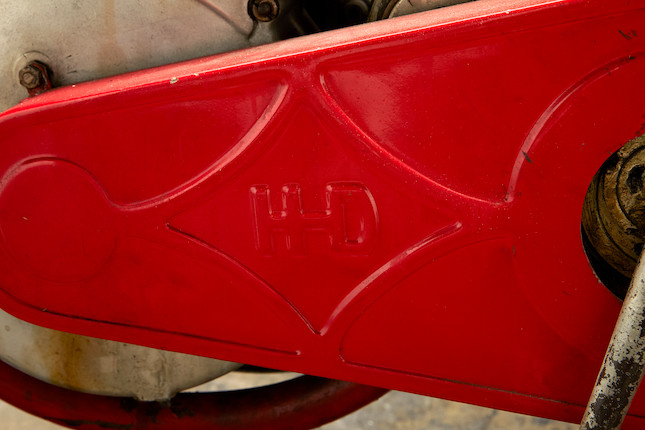 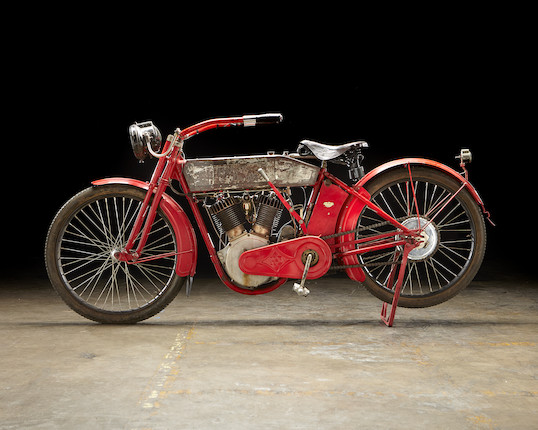 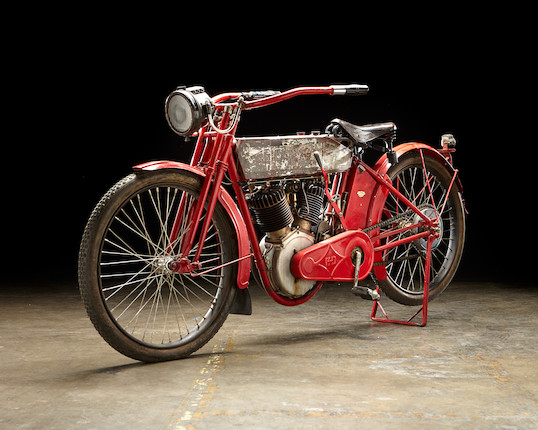 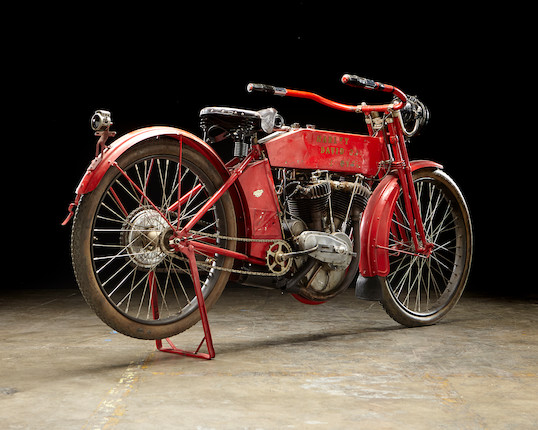 The year 1912 saw the introduction of Harley-Davidson's first all-chain drive model, which also featured a clutch, skirted fenders, and a 1,000cc engine with mechanical valves. Harley's 'full floteing' (sic) seat featured a spring in the frame's rear downtube. Harley was slowly modernising, although another three years would pass before it offered a three-speed gearbox. Harley offered a single- and twin-cylinder models in 1912, with belt or chain drive, and magneto ignition. The X8E was Harley's top of the range model, and at $310 cost $10 more than the standard 6.5hp twin. 1912 Harley 8hp twins are rare, as the engine capacity was only increased from 49ci to 60ci mid year, making it a more powerful and desirable machine, and the first 'Big Twin'.

This matching-numbers 1912 Harley-Davidson retains its original cylinders (with perfect fins) and matching engine/cylinder barrel stampings, and a one-year-only crankcase breather/primary chain lubricator. It was purchased by the immediately preceding owner at the 1984 Steve McQueen estate auction at the Imperial Palace hotel in Las Vegas (Lot 525), and comes with a certificate of authenticity signed by Terry and Chad McQueen. It is believed that Steve rode this Harley in at least one Pre-1916 event. The distinctive paint scheme, with one tank bearing its original paint, is the subject of discussion; did Steve McQueen and his buddy Von Dutch rattle-can paint the bike red after a late-night drinking session, as some claim? Given McQueen's love and knowledge of early American motorcycles, this must be open to question; but then again, both men had an eccentric sense of humour, and were known to pull stunts under the influence of whisky (or worse).

This ex-Steve McQueen 1912 Harley-Davidson X8E is in running condition, and it appears that the original factory paint survives under that distinctive red finish. It should be noted that after Steve McQueen's ownership, the wheel rims were upgraded to make the machine safe to ride, and a headlamp added for Vintage rallies. The current owner purchased this ex-McQueen Harley at Bonhams' Las Vegas Sale in January 2015 (Lot 171) and has had it running. Offered on a Bill of Sale.

The title is in transit.