The Oak Interior / A rare James I joined oak adolescents' caqueteuse armchair, Salisbury, circa 1610 - 20 In the manner of the acclaimed Humphrey Beckham workshop 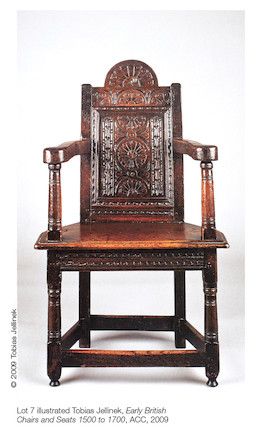 Our specialists can help you find a similar item at an auction or via a private sale.

In the manner of the acclaimed Humphrey Beckham workshop
Having a characteristic large lunette-carved crest, the design repeated on the integral carved top rail, the back panel carved with a rosette centred between demi-rosettes and flanked by a stiff-leaf carved to either side, the angular outsplayed arms jointed into the front of the back uprights, and following the outline of the trapezoidal seat, linear gauge-carved seat rails, on columnar ring-turned front arm supports and legs, plain stretchers, 61cm wide x 40cm deep x 100.5cm high, (24in wide x 15 1/2in deep x 39 1/2in high)

Illustrated:
Illustrated and discussed Tobias Jellinek, Early British Chairs and Seats 1500 to 1700, p. 108, pl. 113. Described by the author as a 'very fine caqueteuse'.

Related Literature:
A comparable caqueteuse armchair, with a highly similar carved back panel, attributed to Humphrey Beckham's workshop, in the collection at Hall's Croft, Stratford-Upon-Avon, Warwickshire, is illustrated Victor Chinnery, Oak Furniture: The British Tradition (2016), p. 409, fig. 4:65. For further examples of joined armchairs, predominantly of caqueteuse form, attributed to Salisbury, see ibid. pp.405 - 413. The author notes several similar features, in both form and design, amongst these chairs, thereby identifying the work of a single workshop, and in particular the work of one specialist carver, Humphrey Beckham [b. 1588], and the influence he and his family had on joiner-carver work around Salisbury at the beginning of the 17th century. See ibid. Appendix III and IV.