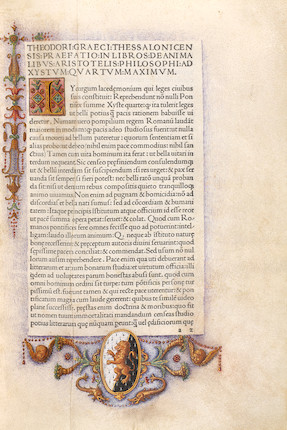 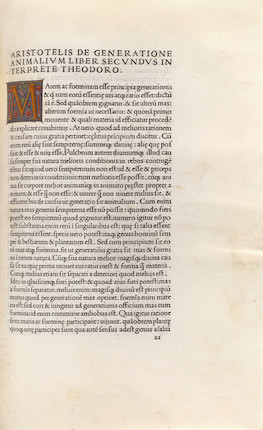 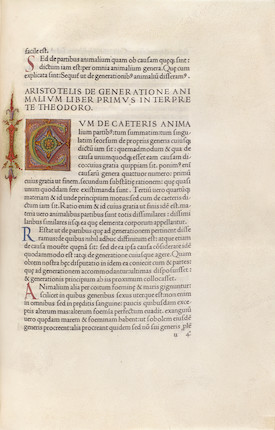 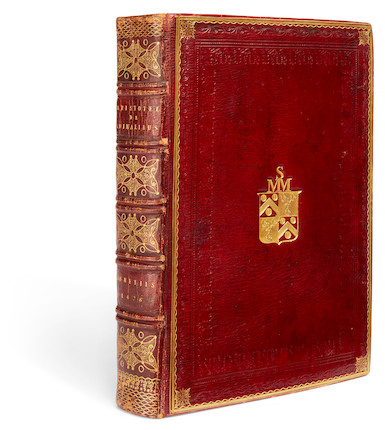 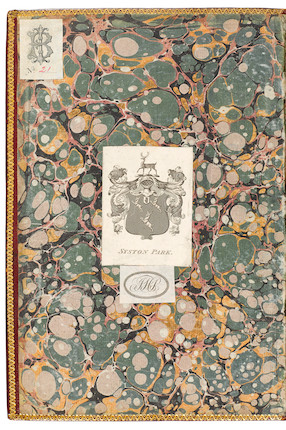 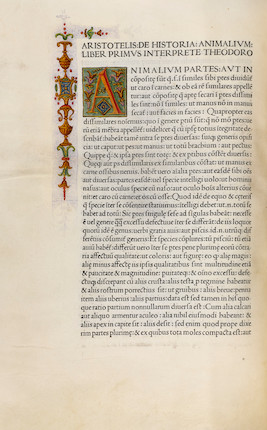 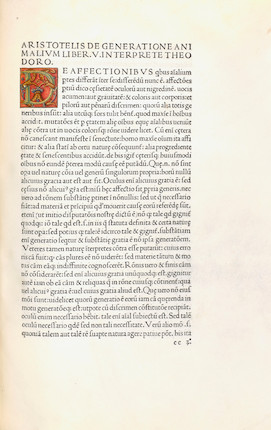 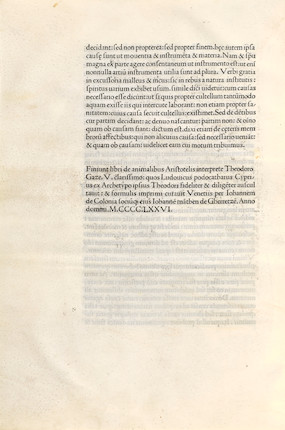 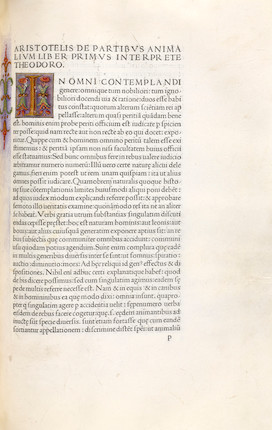 MAGNIFICENT FIRST EDITION OF ARISTOTLE'S HISTORY OF ANIMALS: ONE OF TWO KNOWN COPIES PRINTED ON VELLUM and among the very finest examples of vellum printing to appear at auction in recent decades. This Latin translation by Theodore Gaza was the first collection of biological works to be printed, comprising Aristotle's three texts: De historia animalium (descriptive zoology, of over 500 species), De partibus animalium (animal physiology), and De generatione animalium (animal reproduction and embryology). It is widely considered to have been the single-most important source of zoological information for nearly two millenia.

"A PERFECT GEM" (Syston Park Library catalogue), printed on vellum, decorated and fully rubricated. Vellum printed copies of Renaissance books can be characterized as sponsors' copies and as such were issued in extremely small numbers. A survival rate of only 2 vellum copies as here is not unusual. Moreover, as examples of the printer's art from its early decades, Venetian printing on vellum is unsurpassed in beauty. The splendid and distinctly classical initials and borders are closely tied to the work of illuminator Gaspare da Padova. Gaspare was active in Rome from the 1460s to 1493 and his known patrons included Cardinal Franceso Gonzago and Cardinal Giovanni of Aragon. For comparable examples see the Vatican's Latin MS 2094, being also Theodore Gaza's translation of De animalibus, c.1473/74-80 and the NYPL Spencer Collection MS 20 being Valerius Maximus's Facta et dicta memorabilia, c.1480, among numerous other humanist texts.

The only other known copy on vellum is in the Bibliothèque nationale de France (van Praet, vol 3, p 56). Interestingly, the early provenance of the BnF copy is also undetermined; the prologue has white vine-stem borders with a blank roundel for the arms. It was acquired for the Royal Library in 1784 having formerly been in the collections of Louis-César, Duc de Vallière, and George Jackson (d.1763).

When in the collection of Masterman-Sykes this very copy was seen by T.F. Dibdin who notes in the Bibliographical Decameron of 1817, "Yet how can I omit to mention, with the distinction which it merits, the very beautiful, if not matchless, copy of Theodore Gaza's Latin version of 'Aristotle upon Animals,' of the date of 1476, in folio, UPON VELLUM, from the press of John of Cologne—of which my friend Sir M.M. Sykes is the fortunate possessor? If my memory be not treacherous, this is the most exquisite specimen of an early Venetian vellum book that I have ever seen" (vol 1, pp 402-3). This volume is preserved in nearly identical condition to when Dibdin handled it almost exactly 200 years ago.

From 1796 to 1891 the chain of provenance is unbroken and uniformly distinguished. It was handled by three famous booksellers: James Edwards, William Pickering and Bernard Quaritch and was a prized possession in the important libraries of Sir Mark Masterman-Sykes, Sir John Hayford Thorold and his son, and the American railway tycoon, Brayton Ives. James Edwards is of particular note as the man who brought it out of Italy, in a move quintessential of the golden age of book collecting in England. Edwards, characterized by Dibdin as "Rinaldo, the wealthy, the fortunate, and the heroic" (p 14), traveled widely on the continent acquiring libraries from many nobles, some straitened by revolution. At the time that the Duke of Cassano gave Edwards this book, for example, the Duke's own son Gennaro Serra was imprisoned for republicanism and his family was working to negotiate his release.

Though this volume's history is so well-known in England, following its purchase by William Evarts Benjamin at the Ives sale in 1891, the trail goes cold. Benjamin was a New York publisher, book and autograph dealer, and husband of the Standard Oil heiress, Anne Engle Rogers. His purchase is recorded in the priced copy of the Ives catalogue at Cornell, but we find no mention of it in either those of his catalogues which are held at the Grolier Club or in his archive at Columbia University. Moreover, although the first Census of 15th Century books owned in America was published in 1919, this copy is not recorded there nor in the subsequent censuses. This volume came to America at a time only just before the rise of great American collectors such as Henry Edwards Huntington and J.P. Morgan (who began buying in earnest in only about 1890). Had Brayton Ives's auction been a few years later, this volume almost certainly would have been widely known to bibliophiles today instead of an extraordinary rediscovery.

Aristotle's De animalibus is the earliest work known of comprehensive natural history written from the perspective of an impartial observer. As such it marks one of the most crucial events in intellectual history: "the sudden appearance, seemingly de novo, of naturalistic thought ... the procedure of basing explanations of natural phenomena on the things and processes of nature ... 'It is to Aristotle in the first place that we owe the distinction between those who describe the world in terms of myth and the supernatural, and those who first attempted to account for it by natural causes'" (Moore p 30, quoting W.C. Guthrie).

It is fitting, then, that De animalibus was among the earliest scientific works to be printed and the first comprehensive work of biology. Its influence was far-reaching, giving to the western world the beginning of zoology, comparative anatomy and embryology. Of the embryology, Joseph Needham assessed Aristotle's contributions as "greater in number than those of any other individual embryologist and ... [of] so profound an influence upon the following twenty centuries" (p 36). Aristotle's work in zoology, though "not without errors ... was the grandest biological synthesis of the time, and remained the ultimate authority for many centuries after his death. His observations on the anatomy of octopus, cuttlefish, crustaceans and many other marine invertebrates are remarkably accurate, and could only have been made from first-hand experience with dissection. Aristotle described the embryological development of a chick; he distinguished whales and dolphins from fish; he described the chambered stomachs of ruminants and the social organization of bees; he noticed that some sharks give birth to live young—his books on animals are filled with such observations, some of which were not confirmed until many centuries later" (Waggoner, Aristotle, UCMP). The extent of Aristotle's own personal field research can never be known, but for a strong case as regards his marine biology on a specific island off the Mysian coast see Armand Marie Leroi's The Lagoon: How Aristotle Invented Science, 2014. Many scholars believe that Aristotle's scientific writing substantially predated and informed his philosophic work.

The present text, in its translation by Theodore Gaza, was "the standard version of the Aristotelian zoological works throughout the Renaissance period and later" (Wingate p 127). Theodore (c.1400-c.1476) was the pre-eminent translator of Aristotle in the Renaissance, the bitter rival of George of Trebizond. He was a native of Thessalonica who fled to Italy in 1430, a refugee from the Turks. He taught Greek at Ferrara and in 1450 was invited to Rome by Pope Nicholas V (d.1455), the creator of the library which eventually became the Bibliotheca Apostolica Vaticana. This translation was begun for him but the dedication in this editio princeps is to Pope Sixtus IV. The manuscript version at the Vatican is a surmised dedication copy of this translation dated c.1473/4 or c.1480. Theodore Gaza's relationship with Pope Sixtus was not altogether satisfactory however. "It is reported that on one occasion, when Sixtus paid him a number of gold pieces (not so much, it seems, for his elegantly rendered Latin version of Aristotle's De animalibus as for the cost of the expensive gold binding of the manuscript), Gaza angrily cast the money into the Tiber river..." (Geanakoplos p 87).

The two printers of this edition were John of Cologne and John Manthen, both part of the German influx introducing printing to Italy (the first press in Venice arrived in 1469). John of Cologne was the former partner of Nicholas Jenson, and their books were great achievements in printing. The partnership of the two Johns may have been more as booksellers than as printers, judging from an inscription affixed to their edition of Valerius Maximus, "yet all the works that came from their press, or were printed for them, do them infinite credit" (Timperley p 141). It is also speculated that while he was Jenson's partner, it was John of Cologne who supplied the funds while Jenson supplied the type. The question of the money is a particularly interesting one in the case of the 1476 De animalibus. The special copies which were printed on vellum are likely to have been made for sponsors of the edition in as few as one to five copies. Here, the early provenance of both surviving vellum copies is as yet undetermined. Furthermore some political jockeying seems likely given Theodore Gaza's dissatisfaction with the patronage of Pope Sixtus IV. The colophon can be read to imply that Ludovico Prodocator of Cyprus sponsored this edition. Prodocator was the private secretary and possible physician of Rodrigo Borgia, who later made him a cardinal. Both the publishing and printing history of this extremely important work in the history of scientific thought remain open to research.

Since 1978, only three copies on paper of this edition of De animalibus have appeared at auction, the most recent being in 2001. The most recent comparable incunable vellum printing at auction was in 2013, being Virgil's Opera, 1470.