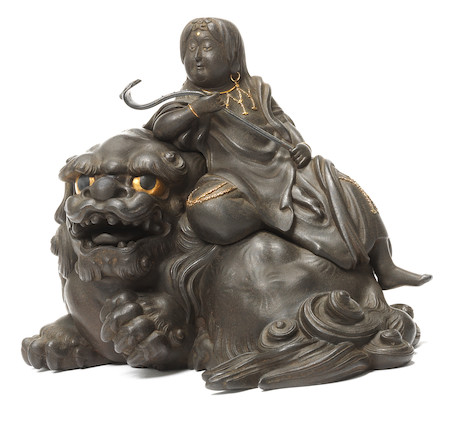 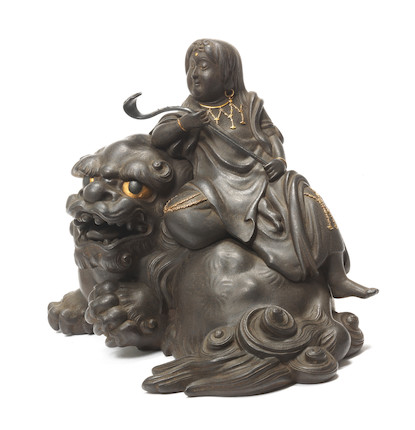 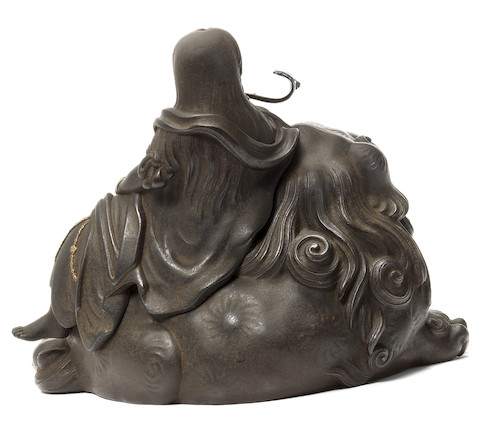 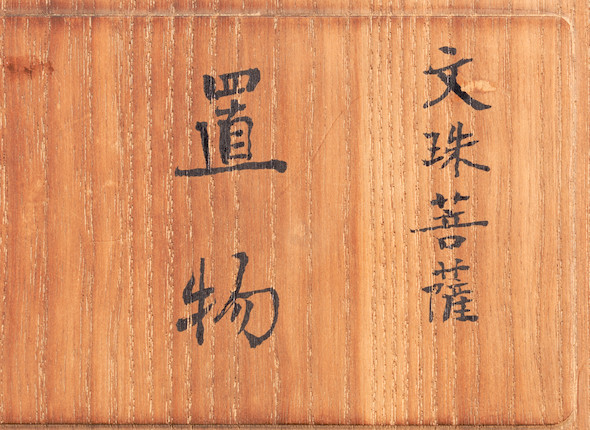 Our Japanese Art specialists can help you find a similar item at an auction or via a private sale.

By Unno Shomin (1844-1915), late Edo Period
Represented as a youth, clutching a detachable silver reishi fungus sceptre and seated in a relaxed pose on the back of a large lion dog, the jewels adorning his body inlaid in gold, the shishi's eyes of gilt with black pupils, the base inset with a silver plaque and signed in chiselled characters Suifu no ju Unno Motohira saku (made by Unno Motohira in Mito); with tomobako, titled Monju Bosatsu okimono, the inside of the lid inscribed Monju Bosatsu no zu tetsu okimono, Unno Shomin sensei Mito zaiju seinenki no saku Motohira zaimei (Iron okimono of Monju Bosatsu made by Master Unno Shomin when he was young and living in Mito, with signature Motohira) and signed Hakuzanshi Toyokawa Mitsunaga no sho (certified by Hakuzanshi Toyokawa Mitsunaga, [probably II]) with two seals Hakuzanshi and Shinryusai. 14cm x 17.7cm (5½in x 7in). (3).

Unno Shomin is perhaps the most famous of the generation of metaworkers who started their careers in the sword-fitting workshops of the Mito fief; he moved to nearby Tokyo in the early Meiji era, changing his name from Motohira to Shomin. He showed great promise from an early age, studying calligraphy and painting in addition to chiseling, and was soon awarded the art-name Shomin, "superior to [So]min," in the expectation that his work would one day excel even that of Yokoya Somin (1670–1733), a famed mid-Edo-period master. After the samurai privilege of wearing two swords was revoked in 1876 he threw himself into the development of new types of products for both Japanese and international customers, exhibited frequently at expositions inside and outside Japan, served as a professor at Tokyo Art School, and in 1896 was appointed to the order of Teishitsu Gigeiin (Artist-Craftsman to the Imperial Household). He had numerous accomplished disciples (for Shomin's biography, see Wakayama Homatsu, Kinko Jiten [Dictionary of Metalworkers], Tokyo, Yuzankaku, 1972, pp.54–55).

Toyokawa Mitsunaga II (1851-1923) was a Tokyo metal-worker who excelled at making kozuka and menuki using the takabori technique. 1