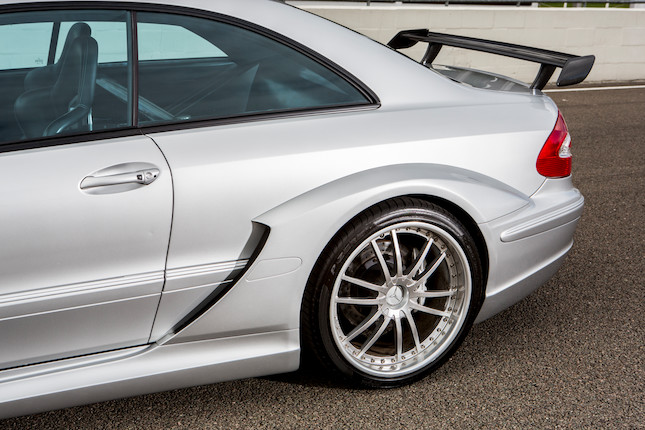 '... the sheer ease of driving it – at least on public roads – makes it a shockingly fast, massively entertaining road warrior. Of all the AMG beasts I've sampled – and there have been many – this has to be the most exciting.' - Richard Bremner, Autocar.

Offered here is one of the most exclusive and sought after limited-edition Mercedes-Benz models of recent years, the CLK DTM AMG Coupé, only 100 examples of which were produced. Developed by Mercedes-Benz's official performance division, AMG, the DTM took its name from the eponymous German touring car race series - the Deutsche Tourenwagen Masters - and was built on the platform of the '2nd Generation' C209 CLK (Coupé Leicht Kurz - Coupé Light Short) that had been introduced in 2002. But whereas the DTM competition cars were limited by the regulations to a normally aspirated 4.0-litre V8 engine producing less than 500bhp, AMG's road version came with a supercharged 5.4-litre unit pumping out some 582 horsepower, making it the most powerful in the CLK range. The five-speed semi-automatic transmission is controlled by the 'supercar standard' shift paddles ahead of the steering wheel. Height-adjustable spring/shock absorber units are fitted all round and the suspension bushes are stiffer, while the DTM's redesigned rear suspension owes little to that of the stock CLK. There are also bigger and stronger AMG composite brakes. A bespoke Electronic Stability Programme (ESP) helps keep everything under control, aided by a mechanical limited-slip differential. Weighing 1,742kg, the CLK DTM AMG races to 100km/h (62mph) in a trifling 3.9 seconds and runs into the rev limiter at 320km/h (199mph).

The car's aggressive styling was modelled on the racing version used by AMG works driver Bernd Schneider to win the 2003 DTM championship. Its deep front apron, large air intake ducts, prominently flared wheelarches, boot-mounted rear wing and large-diameter (19" front/20" rear) alloy wheels are all elements developed from the DTM cars. Like its racing counterpart, the road car makes liberal use of carbon fibre for its body panels, while the interior is unmistakably that of a competition car, albeit one trimmed and equipped to Mercedes-Benz's highest standards. Carbon fibre is also used for much of the interior fittings including the lightweight leather/Alcantara trimmed bucket seats, while the rim of the AMG sports steering wheel is covered in high-grip buckskin. There are no rears seats in the CLK DTM AMG, which is strictly a two-seater. The instrumentation consists of a digital rev counter, white-faced '220mph' speedometer, and oil and water temperature gauges, while the CLK's COMAND infotainment system is retained. An aluminium plinth on the centre console surrounding the 'PRND' gear selector is engraved 'CLK DTM One out of 100', and there are 'AMG' logos to the door kick-plates.

Despite an asking price of over £180,000, all 100 cars sold out immediately. High-profile owners included Formula 1 drivers Jenson Button and Takuma Sato. A limited-edition run of 80 cabriolets followed.

Offered for sale by its first and only owner, this CLK DTM AMG comes with full main agent service history together with its original purchase invoice, AMG Certificate of Conformity and UK Type Approval Certificate. The last service, which included fitting four new tyres, was carried out in September 2014 (at 8340 miles) by Harwoods Bentley. All service bills are on file, testifying to the owner's fastidious approach to maintenance, together with a V5C document and MoT to August 2016.

Please note the correct registration number for this car is: GY05 KFJ