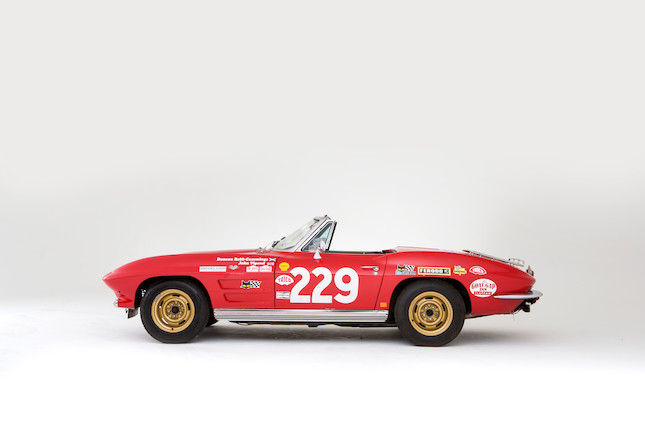 This 1964 Chevrolet Corvette Sting Ray rally car has the 340ci (5.6-litre) V8 engine and four-speed manual transmission. It was rallied by Duncan Robb-Cummings in the Monte Carlo Challenge four years in succession: 1998, 1999, 2000 and 2001, and was also campaigned in the 1999 Rallye Des Lavandes and the 2000 and 2001 Rallye de Paris. The Corvette was featured in Classic & Sports Car magazine and Classic Car Weekly at that time and comes with a huge history folder containing photographs, MoTs, ferry passes, entries and correspondence concerning all the events it took part in.

This Corvette has now covered 82,999 miles from new. It came out of storage last year  and since then has been restored and is ready to rally. While in the vendor's ownership it has had two new FIA specification 4-point Sabelt seat belts fitted; the front and rear brakes have been stripped and rebuilt, and new hand brake cables installed; gear selector rebuilt; headlight motors replaced; new wiring loom; new expansion tank; new Kenlowe fan; and a rebuilt radiator. In addition, the chassis has been extensively cleaned, treated and re-undersealed, while plates have been welded to the chassis leg. A new hood has been fitted and the hood mechanism rebuilt. The steering column, fuel tank and header tank are new, while the carburettor and fuel pump have been reconditioned. The car has been re-sprayed and there are new carpets throughout. Over £12,000 has been spent on this car in the last 12 months (bills on file), with much of the work being carried out by Rare & Performance Motors in Rushmoor, Surrey, builders of Lord March's Corvette Stingray race-car.

Now producing in the region of 349bhp, this amazing looking Corvette sounds epic and really flies, making E-Types and 911s look pedestrian. 'LMD 126B' has gained pride of place on the start line at Goodwood on the last six occasions it was invited, and in the right hands is a likely front runner in any rally event in Europe. Tuned, fully serviced and freshly MoT'd, it comes with the aforementioned history file, previous FIVA Certificate and V5C registration document.