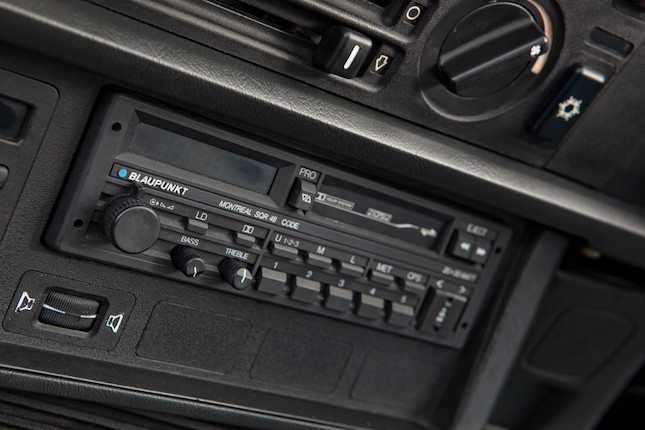 'A highly significant car in BMW's history, the M635Csi was the first to carry the famous "Motorsport" badge that has become synonymous with superlative performance and engineering.' – Supercar World.

Stylish, fast and well engineered, the 635CSi enjoyed a production run lasting into the 1990s, being periodically up-dated in line with its sister models. BMW's 600-Series coupe debuted in 1976 and was mechanically similar to the 700-Series saloons, although introduced before them. Karmann styled like the preceding 3.0CS/CSi, the newcomer was similarly well-specified, featuring all-independent suspension, four-wheel disc brakes and power-assisted steering as standard. Brainchild of BMW's Motorsport department, the M635CSi version arrived in 1984. Its engine was a development of the M1 supercar's 3.5-litre, 24-valve, six-cylinder unit producing 286bhp, the increased power necessitating chassis improvements which included altered weight distribution, revised suspension, bigger brakes and a limited-slip differential. There was also a close-ratio five-speed gearbox (or four-speed multi-mode auto) and a more luxurious interior, while outwardly this ultimate 6-Series model was readily distinguishable by virtue of its 'M Technic' body kit. Performance was emphatically in the supercar league, the M635CSi being capable of reaching 100km/h (62mph) in around 6 seconds on its way to a top speed in excess of 250km/h (155mph).

One of 5,855 examples built, some 500 being produced in 1985, this superb M635CSi was re-commissioned in 2000 by BMW Bavarian, Belfast after five years in storage and then consigned to a private collection. The car was re-commissioned and fully serviced again in 2014, receiving all new fluids and filters, and a new water pump. In addition, it was fitted with new BMW polished split-rim alloy wheels shod with new tyres (original wheels with car). This car has the standard Getrag five-speed manual gearbox while factory fitted options include a tinted glass sunroof, electric windows and a trip computer. A total of 58,974 miles is recorded on the odometer and we are advised that this M635CSi drives as one would expect from such a little used example. Finished in white with oxblood leather interior, this exceptional M635CSi is offered with MoT to May 2016 and a V5 registration document.

Since the time of cataloguing the following information has come to light relating to this car: This car was first registered to BMW Uk and used as press car, as such it is thought to have appeared in several magazine articles in period. The first private owner purchased the car in 1986 and it stayed in this ownership for 15 years, the last five of which it was not used. A Mr Mark Lundy bought car in the late 1990s at which point it was showing 34,000 miles. Mr Lundy restored the car to the present condition; BMW Belfast assisted with the sourcing of new parts including: new front wings, roof section, brakes, exhaust, nearside door, window motors. In addition to this the suspension was rebuilt, the engine was stripped, but found to be perfect and a professional repaint was undertaken. Upon completion the vehicle was displayed at the 50 years of BMW event at Woburn Abbey in 2002 where it won best M powered car. Sold to a Mr Michael Stewart in 2003 for his private collection the next owner Mr McClenghan purchased it in 2005, from whom the current owner bought the car in 2013.