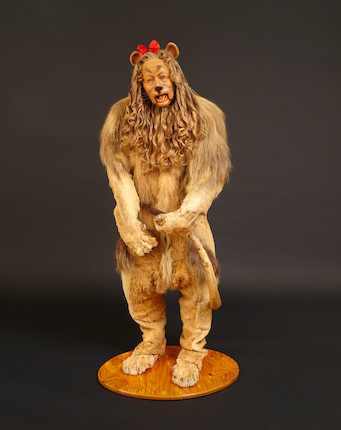 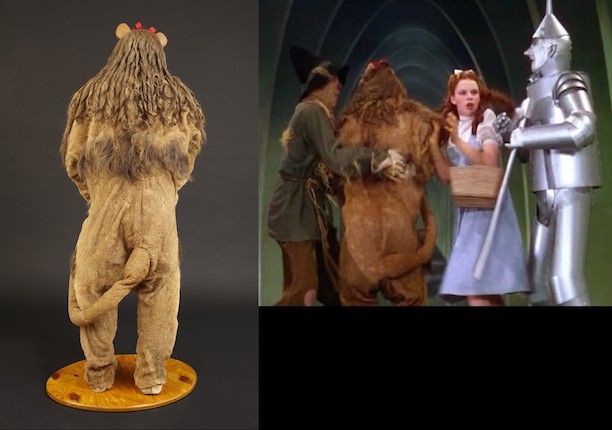 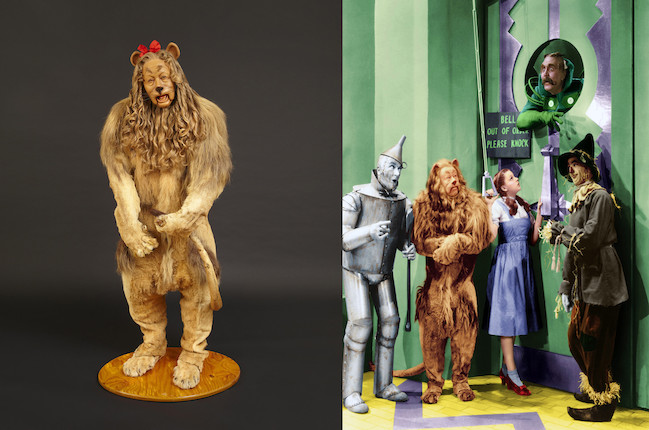 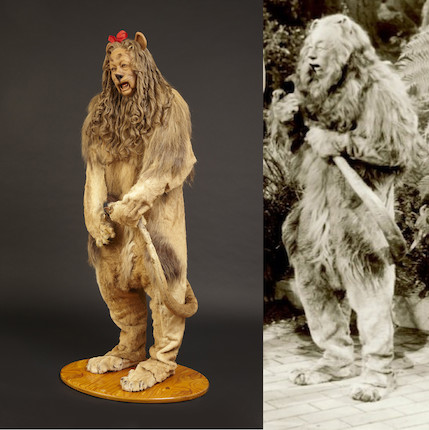 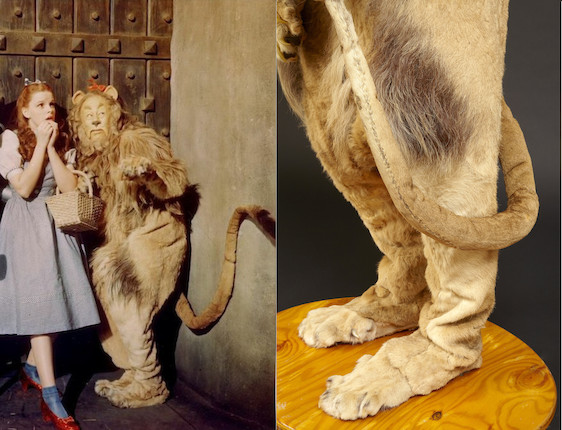 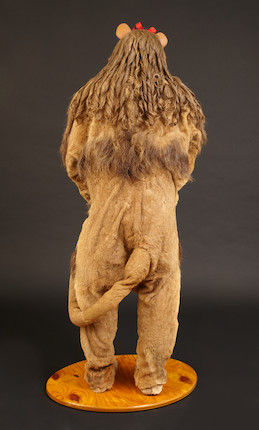 Bert Lahr's Cowardly Lion costume from the Wizard of Oz

Metro-Goldwyn-Mayer, 1939. Designed by Adrian and constructed of lion skin and fur, featuring a hidden zipper front and an attached tail verso, now displayed on a custom figure featuring a photo-realistic head sculpture cast directly from actor Bert Lahr's son replete with optical glass eyes and Italian human hair wig & mane and footwear constructed out of lion pelt. Initially conserved at the Los Angeles County Museum of Art, this costume has been examined recently and is thought to be in exhibit-ready condition, and includes a professional fine art shipping crate.
Provenance: Discovered carefully bundled up in one of the oldest buildings on the MGM lot. Acquired by The Comisar Collection, leading curators of Hollywood ephemera, who supervised the costume's initial conservation and ongoing collection care over the past two decades.

Publication history: Stillman, William & Scarfone, Jay. The Wizard of Oz: The Official 75th Anniversary Companion (NY: 2014); Stillman, William & Scarfone, Jay. The Wizardry of Oz: The Artistry and Magic of the 1939 MGM Classic (NY: 2004); The Hollywood Reporter; The Los Angeles Times; and others. Featured on various television programs including "The Today Show"; "The Oprah Winfrey Show"; in documentary segments on The History Channel and The Learning Channel; and others.

For most of us, the Cowardly Lion is the most endearing character in Oz: we can all identify with being crippled by irrational fear and desiring more courage. The film's production team had no option (in the days before synthetic fur) for creating a realistic lion costume other than fashioning it out of real skins, and the challenge then became to find lion hides that visually matched each other close enough so that several costumes could be made and used interchangeably throughout filming. This proved to be impossible, as each available lion hide had very particular hair patterns, swirls, coloration, scars, abrasions, fur loss, etc. that were unique to the one animal; and the only solution was for actor Bert Lahr to primarily wear one costume throughout filming and for stunt and stand-in performers to wear another (though at least one other Lion costume was constructed during pre-production, used for test shots, but ultimately never used during filming). As a result, after each long day of filming under early and unbearable Technicolor lights, the Lahr Lion costume had to be placed in an industrial drying bin overnight so that the perspiration could be dried before the next production day.

This costume—with the hides' very distinctive matching properties— has been attributed through screen matches to over a dozen different scenes in which the Cowardly Lion character portrayed by Lahr appears, including his first meeting with Dorothy when he sings, "If I Only Had the Nerve"; as he skips with his friends down the Yellow Brick Road; as he sings "If I Were King of the Forest"; as he visits the Wash & Brush Company; as he meets the Wizard of Oz; as he helps rescue Dorothy; as the Wicked Witch of the West melts; as the humbug Wizard awards him his medal for conspicuous acts of bravery; and finally as Dorothy says goodbye to her friends and clicks her heels together returning to her Kansas farm home. Indeed, these are not only the most iconographic scenes of The Wizard of Oz—the most watched film of all time—but they are among the most memorable in cinematic history. A detailed analysis of the matching properties of the costume, a collection care report and an insurance appraisal are available upon request.

Please note that online bidding will not be available for this lot.