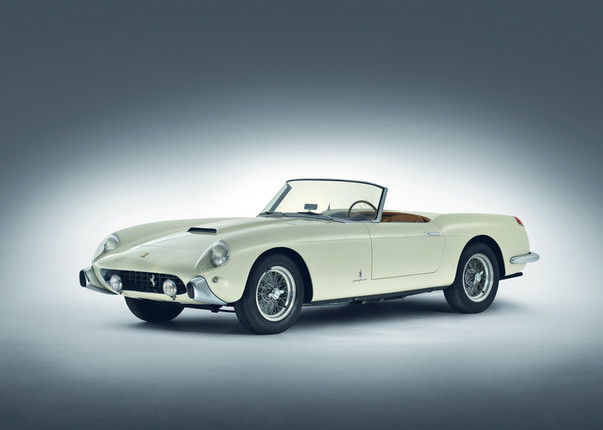 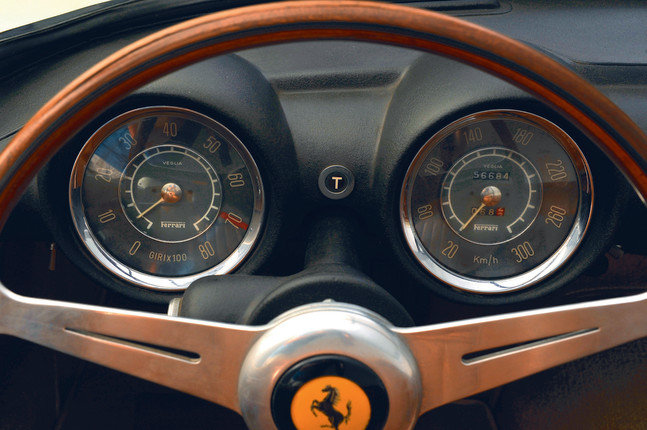 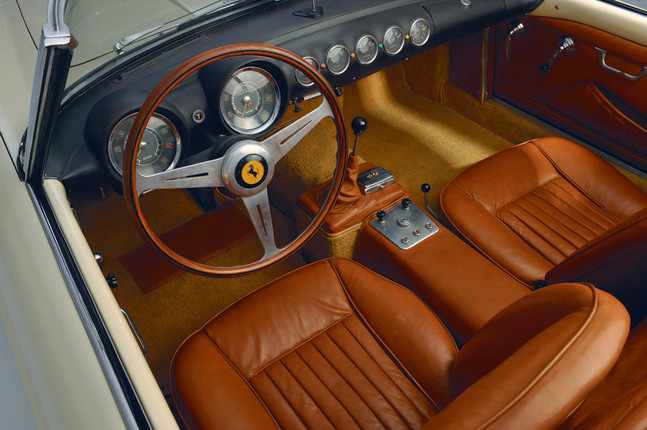 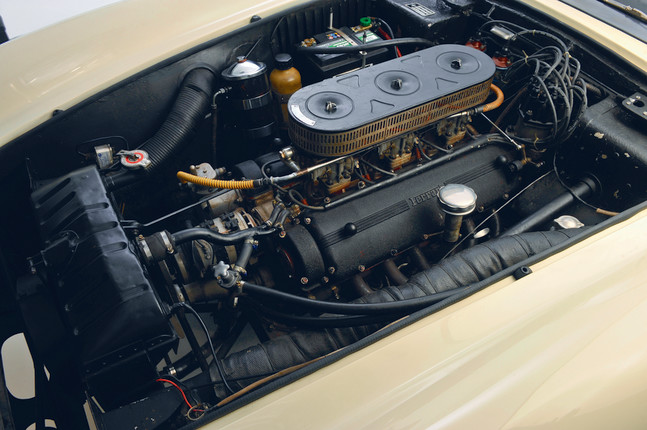 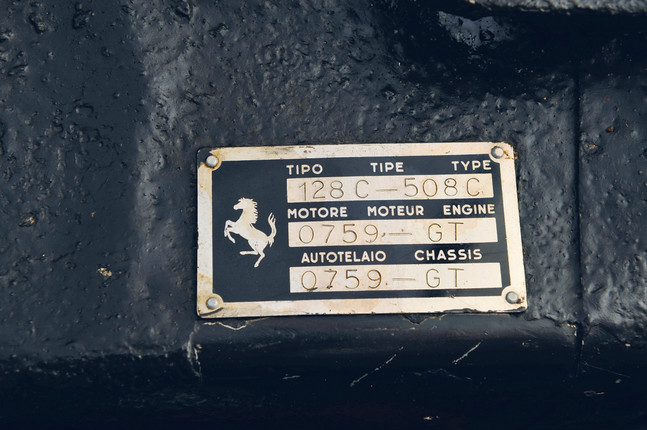 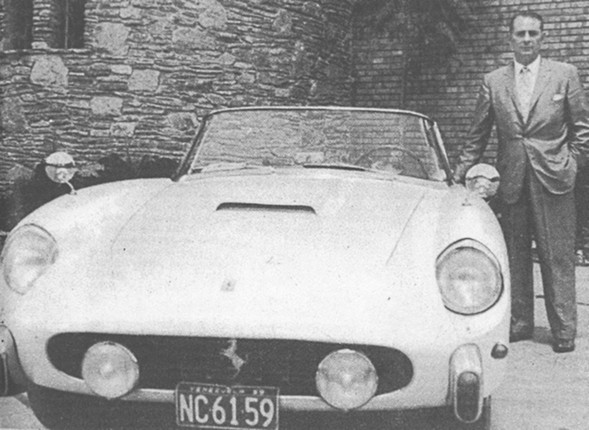 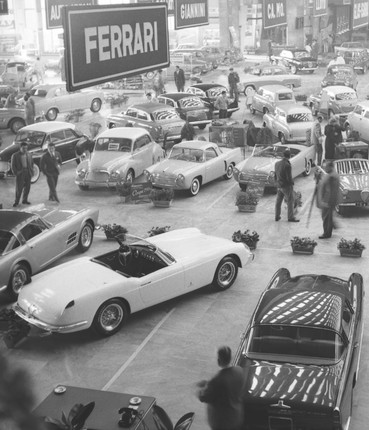 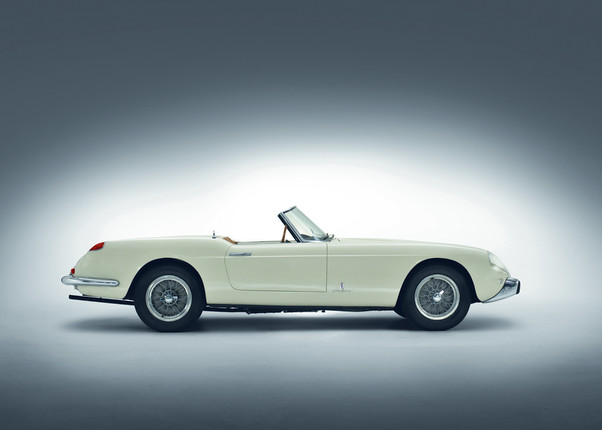 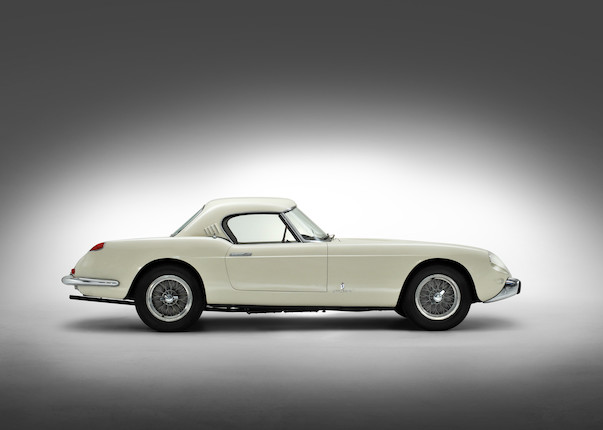 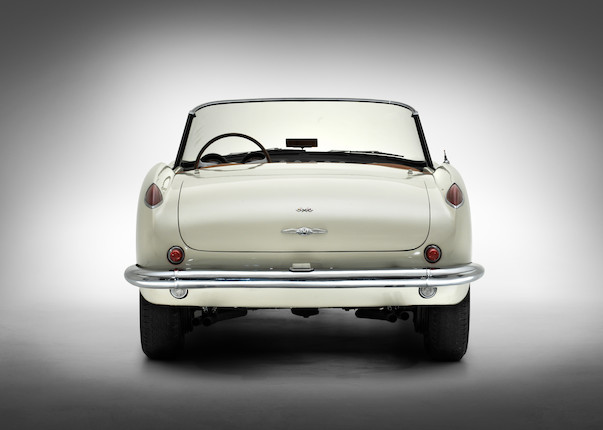 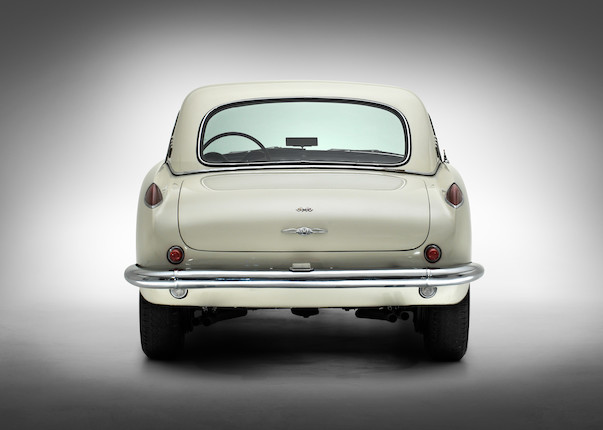 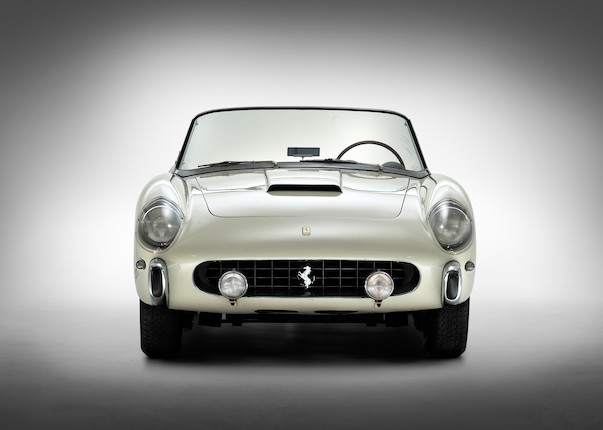 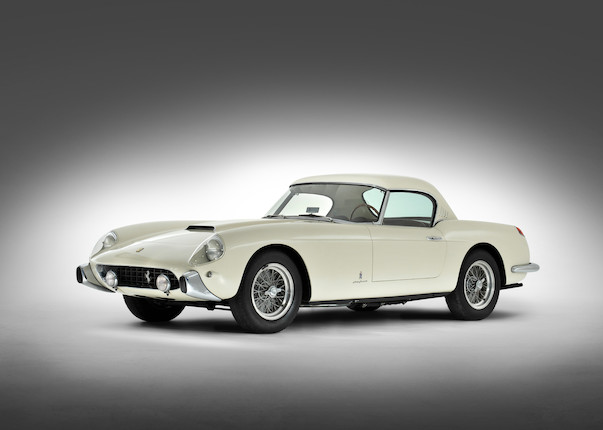 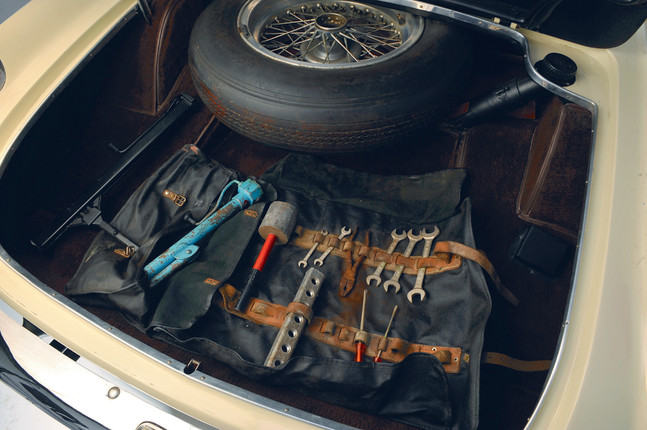 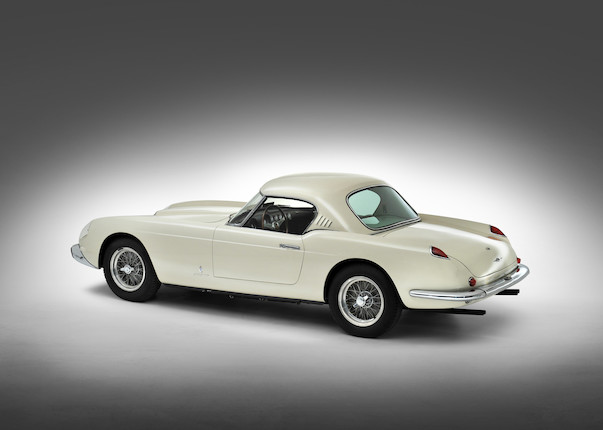 It is to the emergent, dynamic and at the time only two-year-old Italian coachbuilding company, Carrozzeria Boano, that credit should go for reviving 1950s interest in Cabriolet convertible coachwork upon Ferrari chassis. The very first 250 GT Cabriolet was built by Boano in time for the 1956 Geneva Salon de l'Automobile exhibition. Its unveiling there coincided with that of the first Ferrari to launch genuine series production – a Pinin Farina Coupe built in a small production series by the same Boano company.

Boano's Cabriolet was subsequently displayed by Luigi Chinetti – Ferrari's legendary American East Coast importer – at the New York Show. The car found a ready buyer, and meantime Pinin Farina had taken notice of interest in these convertible cars, producing its own Cabriolet that was launched to the public at the following year's Geneva Salon, in March 1957. This very functional and rather sporty-looking styling exercise featured a functional notch in the crest of the left-side door, to give space for the driver's elbow while the waistline thereafter kicked-up into the rear fender peak. While that dream car was finished in Italian red for its debut, it was quickly resprayed green and became Ferrari's British works driver Peter Collins's personal car. It was subsequently fitted by Dunlop with British-made disc brakes – and they in turn would be adapted one day to enhance a works-team Testa Rossa sports-racing machine.

Pinin Farina continued to develop the notion of a 3-litre V12-engined Ferrari Cabriolet, first with a rather exotic and even more sporty-looking Spyder, followed by a more sober prototype street version. The group of four Speciale 250 GT Cabriolet prototypes finally culminated in a green-finished example, sold to Prince Saddrudin Aga Khan in May 1957.

The first 'true production' 250 GT Cabriolet Pinin Farina was then delivered in mid-summer 1957 to American, Mr Oscar 'Ozzie' Olson, later sponsor of the Indy-racing Olsonite Eagles. His Cabriolet's flanks were devoid of the air vents that had adorned the preceding prototypes, and this more discreet style was adopted for the vast majority of the 20-plus examples which quickly followed.

The basis of these early Cabriolets was the same chassis frame/engine aggregate which had under-pinned the 1956-58 Coupe cars. During the summer of 1958 a new, more sporting convertible was introduced as the 250 GT California, but the Series 1 Cabriolet, such as the simply outstanding example offered here, remained the open street Ferrari of choice for the truly discriminating, and perhaps temperamentally less extrovert, less flamboyant, more discreet of Ferrari's contemporary, up-market, clientele...

Here was a Cabriolet for a customer of real taste.

This particularly magnificent Ferrari 250 GT Cabriolet S1 Pinin Farina is chassis serial '0759 GT'. It is a very early example, being only the eighth of some 40 units built overall. Its chassis frame was delivered to the Pinin Farina plant on September 9, 1957, and upon its completion with this strikingly handsome body it was promptly (and so justifiably) exhibited at the 39th Salone dell'Automobile in Turin's Valentino Park exhibition hall, from October 30-November 10 that year.

In January, 1958, this Cabriolet was then shipped to the Venezuelan Ferrari importer, Carlo Kauffman, in the central-American state's capital city of Caracas. It was registered there on Venezuelan plates 'NC 6159'. The car was pictured in the factory's official 1959 Ferrari Yearbook, whose compilers every year made much of the burgeoning marque's global appeal. Study the car's gorgeously preserved tan leather and honeyed carpeting today and one can imagine just how cool and stylish it must have seemed to Carlos Kauffman and his eager clienti as they sampled '0759 GT' here on the broad sun-soaked boulevards of Venezuela's then booming, already oil-rich, capital city...

Caracas itself had grown in economic importance during Venezuela's oil boom of the early 20th Century. By the 1950s, the sprawling city had blossomed through an intensive modernization programme that continued throughout the 1960s and into the 1970s. The dramatic change in the economic structure of the country, which went from being primarily agricultural to becoming focused upon oil production, had stimulated rapid development and Carlos Kauffman found ready interest amongst his friends and neighbours within the upper-tier of Caraquenian (Caracas) society.

Included within the file accompanying this outstanding Cabriolet, are a lavishly-decorated Venezuelan registration certificate, and also a copy of a sales agreement later struck for the car between Luiz Perez Dupuy and his wife Carmen Pietri de Perez Dupuy on the one hand, and Gustavo A. Gutierrez on the other. The document cites the car's colour at that time as having been 'verde' – green – and the sale price as 80,000 Venezuelan Bolivares.

Senor Gustavo Guttierez retained the car in Venezuela until 1986, when it was offered for sale, by that time being described as painted red. Ultimately, in 1991 – 23 long years ago - it was acquired by the great Italian enthusiast Fabrizio Violati and inducted into his Collezione Maranello Rosso displays in the tiny, and-locked, Italian-encircled Republic of San Marino.

There the car graced Fabrizio Violati's exhibition halls, restored in the white paint finish it still retains and fully equipped with a well-made but probably not contemporary white-painted hardtop, which actually exhibits most attractive louvre detailing.

We understand that the car was started-up and run from time to time, and it is pictured in colour on pages 54 and 55 of the Collezione Maranello Rosso book 'Ferrari 250 – Le Ferrari a San Marino' written and compiled by the acknowledged 250 GT-series authority, French expert Jess G. Pourret.

The ignition lock and switch panel are integrated in a neat bright-metal panel topping the thickly-carpeted central transmission tunnel, just behind the leather-booted gearshift with its adjacent – and in 1960s Caracas no doubt much-used and appreciated – chromium-lidded ashtray. The dash panel is neat and functional, yet still discreetly stylish, with its central ancillary instruments flanked by 'just-the-right-sized' multi-coloured warning lights.

Beneath the hood, the Cabriolet's 3-litre V12-cylinder engine exhibits undoubtedly original engine numbering, punched cleanly and of course in the correct period serif type-face, into the normal ground boss at the right-rear of the block/crankcase casing. The car is as factory-specified, with Tipo 508C chassis and gearbox, and engine Tipo 128C. The carburettor set-up beneath the typical period air filter pack comprises triple twin-choke Weber 36DCL instruments.

The engine bay is tidy and in good order but after its years of museum display it is understandably not in concours condition. Relatively modest attention, valeting and fine detailing would undoubtedly elevate the manner in which the car presents under the hood.

The delightful coachwork is Pinin Farina's contemporary Job No '19454', still featuring its original-style front bumperettes and covered headlights. The trunk is dark-brown carpeted and carries a spare Borrani wire wheel shod with a period Pirelli tyre – itself these days something of a desperately rare museum item. What appears to be an original period tool-roll within the boot contains mostly non-original – but still useful – tools, while an original Riganti, Varese, pillar jack has survived beside them.

Of all these wonderful road-going Ferraris from Fabrizio Violati's Collezione Maranello Rosso, this ex-Carlos Kauffman, 1958 Turin Show car, has proved one of the most admired by our specialist – and immensely experienced – Bonhams team members. It radiates a palpable aura of La Dolce Vita – of a romantic by-gone lifestyle – of a particularly sophisticated international jet-set whose discretion in all things would have kept their names, and their lifestyles, just below that borderline at which gossip columnists might begin to take notice...

Please note this vehicle is subject to Import Duty should it remain in the US.