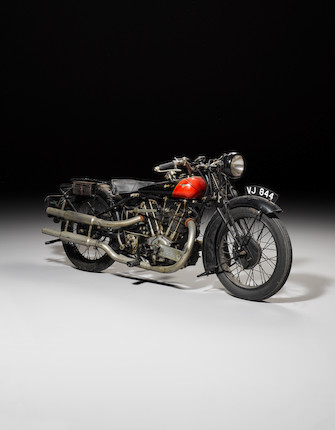 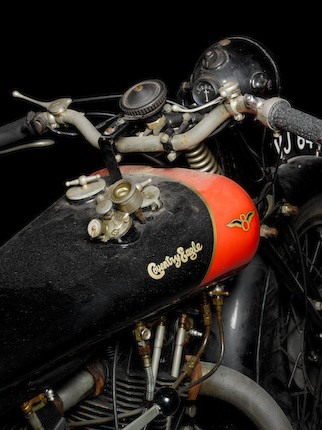 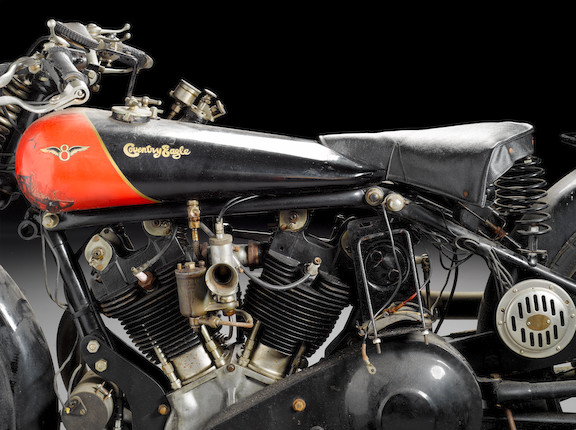 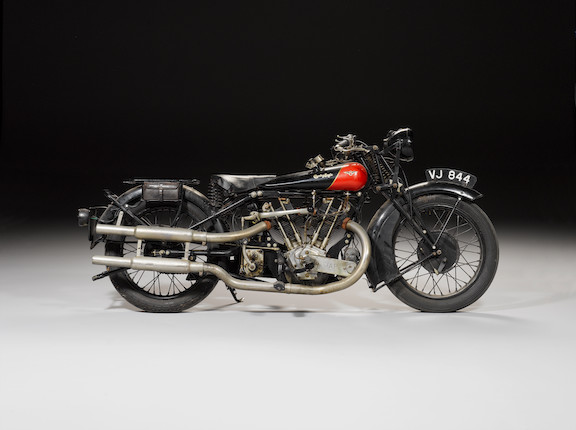 Established in Victorian times as a bicycle manufacturer, Coventry-Eagle built a diverse range of motorcycles using proprietary engines ((mainly those of J A Prestwich) from 1901 onwards, though machines only began to be produced in significant numbers after WWI. Six Coventry-Eagles were offered for 1923, all JAP-powered except for a Blackburne-engined 350, ranging from the formidable Flying-8 to the diminutive S14 Ultra-Lightweight. Most famous of these was the Flying-8 which, with its 1.0-litre JAP v-twin engine and muscular good looks, was a worthy rival for the Brough Superior and a formidable Brooklands racing machine. Introduced in 1923, the Flying-8 was not Coventry-Eagle’s first v-twin, but it was the first to establish a sporting reputation thanks to its special 976cc sidevalve engine that guaranteed a top speed of 80mph, an exceptional performance at the time. In 1926 the sidevalve version was joined by a new overhead-valve engined Flying-8, again JAP powered. Within a few years however, the onset of the Depression had forced Coventry-Eagle to change tack, the firm concentrating on bread-and-butter lightweights until it ceased motorcycle production in 1939. The last ohv Flying-8 left the factory in 1930 and the final sidevalve model the following year.

One of only a relative handful of overhead-valve-engined Flying-8s known to survive worldwide, this example was purchased from one John Ellis, of County Kildare by Norman Broadbridge in December 1982. Accompanying (copy) correspondence reveals that Mr Ellis was a wealthy collector of motorcycles who had moved to County Kildare from Yorkshire on his retirement, taking his collection with him. His ownership does not, therefor, appear in UK registration records. Previous owners, according to the accompanying old-style logbook (issued 1947) include VMCC Coventry-Eagle marque specialist, Ken Hodgson – from whom Mr Ellis purchased the machine - and motorcycling journalist/publisher, Bruce Main-Smith.

Mr Broadbridge kept the machine, untouched, for many years before deciding to treat it to a cosmetic ‘tidy up’ in the early 1990s. Sadly, he passed away in 1994 before completing the work and never did get the opportunity to ride the Coventry-Eagle. Ownership then passed to Norman’s son Stephen, a VMCC Founders’ Day member. The machine was checked over by Merchant Navy Chief Engineer, Mike Sherwin in February 1994 and his list of work carried out and faults rectified comes with it. It was then returned to ‘hibernation’ and is offered for sale for the first time in 25 years following Stephen Broadbridge’s untimely death, at the age of 56, early in 2007. Offered with Swansea V5 and a most substantial history file of correspondence and other documentation, ‘VJ 844’ represents a rare opportunity to acquire a fine example of one of the Vintage period’s most famous and sought-after superbikes.